It’s funny how often I react differently from the rest of the world to Donald Trump’s various idiocies. Last week, for example, I must have collected a couple dozen of them on the blog. But there were a few I left out. Trump called Hillary Clinton “the devil,” for example, and after looking at the context it seemed like a nothingburger. When I started clicking around, however, it was in headlines everywhere. Likewise, it was pretty obvious that he didn’t really kick a baby out of his rally last Tuesday, but that dustup lasted days and days. Then today he said this about Hillary Clinton:

If she gets to pick her judges, nothing you can do, folks. Although the Second Amendment people — maybe there is, I don’t know.

Trump is making a wisecrack about how gun folks could rub out Hillary—ha ha ha—which is pretty obviously not appropriate for a presidential candidate. Still, it’s just a dumb aside, and no, I don’t think Donald Trump really wants his supporters to assassinate Hillary Clinton. Next.

But no! The world is going nuts over this, and I’ve now read at least a dozen explanations of why “just a joke” is absolutely not an excuse. These have persuaded me to come around on this, but luckily the Trump folks themselves are not defending it as “just a joke.” Their official explanation is that gun owners have “amazing spirit and are tremendously organized,” and 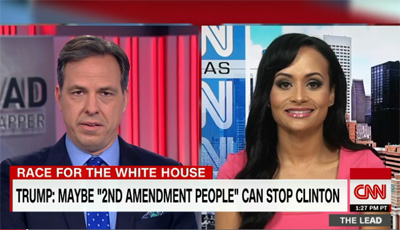 Trump was just noting that they can cast a lot of votes against Hillary. A few minutes later Trump communications advisor Jason Miller stepped in to second this explanation.

As many people have pointed out, though, this makes no sense. Trump was clearly talking about what people might do after Hillary is elected. The gun vote won’t matter at that point. Jake Tapper pointed this out to Trump’s deer-in-headlights spokesperson Katrina Pierson, who explained that Trump was only talking about what could happen. Obviously, she said, Trump “doesn’t want that to happen.” Looked at the right way, he was warning people against violence!

This is yet another example of Trump stepping all over his own message. Yesterday’s big economic speech was supposed to be the latest of his endlessly promised turning points toward greater seriousness, which would allow the news cycle to move off of Trump’s latest gaffe-of-the-day and instead focus on his policies. But within 24 hours of being unchained from his teleprompter, all that was toast. Nobody cares about his economic policies anymore. They just want to know why Trump thinks it’s OK to rally his supporters in favor of murdering Hillary Clinton.

Matt Yglesias points out the broader implications of Trump’s childlike inability to control what comes out of his mouth:

One thing about being POTUS is poorly phrased or indiscreet words can cause market meltdowns or international incidents.

Maybe so. On the other hand, in a Trump presidency, the entire world might learn very quickly to ignore everything he says. With any luck, maybe that could start happening tomorrow.

POSTSCRIPT: Paul Ryan’s primary election is today. Once it’s over and he’s won, maybe now would be a good time to finally unendorse Trump?