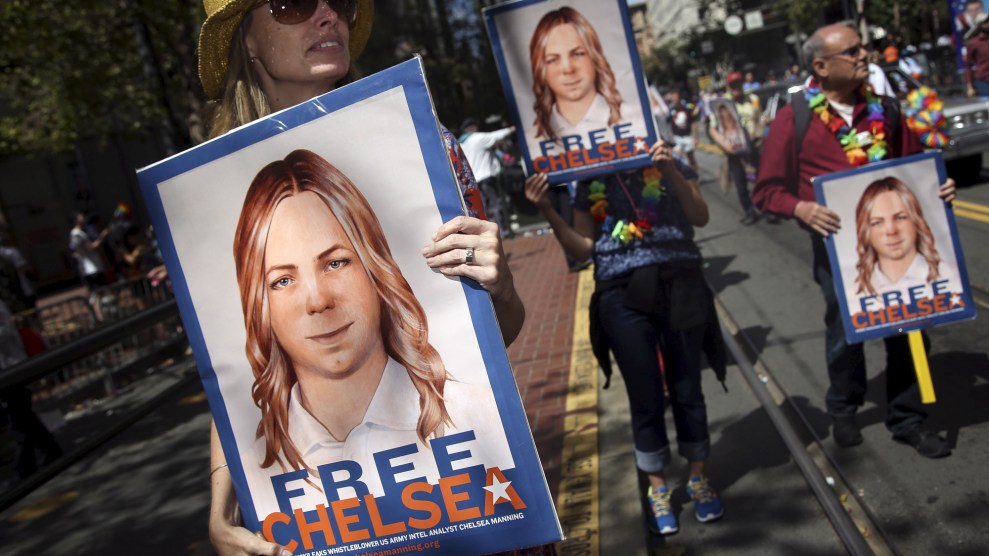 People hold signs calling for the release of Chelsea Manning during a gay pride parade in San Francisco in 2015.Elijah Nouvelage/Reuters via ZUMA Press

It has been a terrible month for Chelsea Manning, the transgender former US soldier serving a 35-year prison sentence for sharing classified information with WikiLeaks. Several weeks ago, the Army whistleblower tried to kill herself at Fort Leavenworth military prison, and on Thursday military officials announced that they were considering filing charges in connection with the suicide attempt.

“Now, while Chelsea is suffering the darkest depression she has experienced since her arrest, the government is taking actions to punish her for that pain,” Chase Strangio, one of Manning’s lawyers from the ACLU, said in a statement. “It is unconscionable and we hope that the investigation is immediately ended and that she is given the health care that she needs to recover.”

News of Manning’s suicide attempt was leaked to the media by a US official, while an unnamed source told celebrity news site TMZ that Manning had tried to hang herself. She was hospitalized in the early hours of July 5. After the incident, Stangio reported that Manning had experienced “past episodes of suicidal ideation in connection to her arrest and the denial of treatment related to gender dysphoria.” In 2015, the Army approved her request for hormone therapy after she sued the federal government for access to the medical treatment, but Strangio told Mother Jones that she continues “a challenge in court over the enforcement of male hair length and grooming standards.”

The suicide-related charges include “resisting the force cell move team,” “prohibited property,” and “conduct which threatens.” If she’s found guilty of the charges, “Chelsea could face punishment including indefinite solitary confinement, reclassification into maximum security, and an additional nine years in medium custody,” the ACLU said in its statement, noting that Manning could lose her chance of parole.

It wouldn’t be the first time Manning has been held in isolation. After she was first taken into custody in 2010, she spent nearly a year in solitary confinement. Following a 14-month investigation into Manning’s treatment—which included being held in solitary for 23 hours a day and being forced to strip naked every night—the UN special rapporteur on torture accused the US government of holding her in “cruel, inhuman, and degrading” conditions. There is a growing push in the United States to end or limit the use of solitary, since long stints in isolation have been shown to lead to disorientation, hallucinations, and panic attacks. Inmates in solitary are also more likely to engage in self-mutilation or to commit suicide.

Asked about the new investigation into the suicide-related charges, US Army spokesman Wayne V. Hall said he was looking into the matter but could not immediately comment.