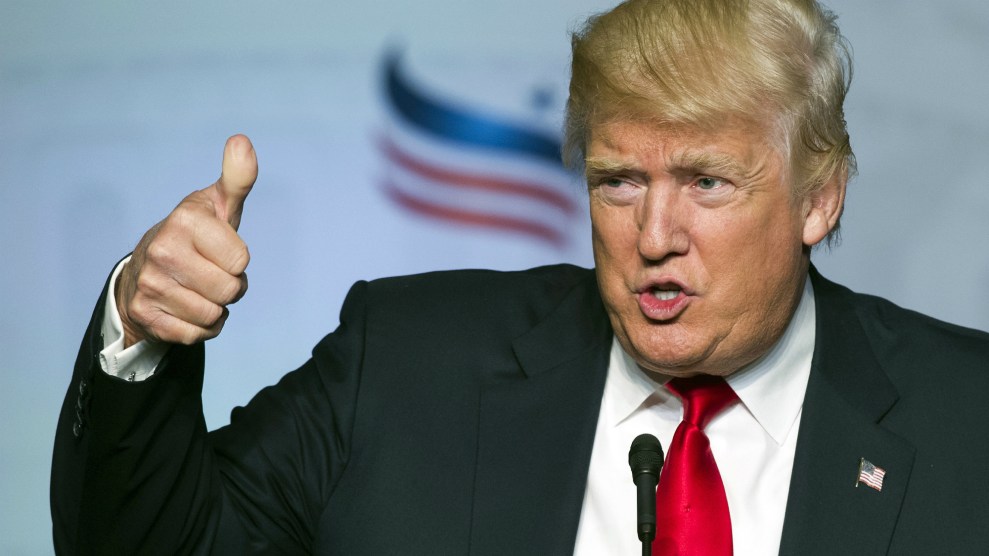 Last week, Donald Trump made a firm commitment to change how Washington works. “If I am elected president, I will end the special interest monopoly in Washington, DC,” he said. “The choice in this election is a choice between taking our government back from the special interests, or surrendering, really, the last scrap of independence to the total and complete control of people like the Clintons.” A few weeks earlier, he was more explicit, saying that if he were elected president he would have “no problem” banning lobbyists from working in his administration.

But when it comes to winning the presidency, Trump has no problem relying on the influence peddlers of the nation’s capital. With his campaign facing severe organizational challenges, Trump has turned to DC lobbying insiders for a crucial task: pulling together and running the Republican convention in Cleveland, where he is expected to claim his crown as the party’s presidential nominee.

Trump’s embrace of lobbyists started in a big way in March, when he hired Paul Manafort, an uber-lobbyist who has specialized in representing strongmen, dictators, and warlords, including Somalia’s Siad Barre, Angolan rebel leader Jonas Savimbi, and Ferdinand Marcos of the Philippines.  Manafort was enlisted for his expertise in rounding up convention delegates—a task he had managed for previous GOP candidates—and he has since been promoted to campaign chairman, displacing Corey Lewandowski.

Manafort is not the only lobbyist on the payroll of the Trump campaign. Doug Davenport, a former lobbyist with Manafort’s old firm, the DCI Group, is working with Manafort. At DCI, Davenport represented Burma’s military junta. His job now is to oversee a team of eight Trump campaign whips riding herd on unruly Republican delegates. (In 2008, the news that Davenport had worked for Burma’s authoritarian leadership led to his resignation from John McCain’s presidential campaign.) One of Davenport’s whips will be Mike McSherry, another DC lobbyist whose clients include Airbnb, Alcoa, and Hyundai. Also working on Davenport’s whip team is Bill McGinley, a DC-based lawyer who is not currently registered as a lobbyist but wrote a chapter of the American Bar Association’s Lobbying Manual, according to his biography. Two other former lobbyists who worked with Manafort at one of his earlier lobbying firms, Michael Conforti and Patrick Brady, are also on the campaign’s convention squad and have been handed the mission of managing relations with state caucuses. Both have been connected to gambling companies.

The influence of Washington lobbyists extends beyond the Trump campaign’s ranks. Several big-name insiders have been recruited by the Republican Party to help organize and run the GOP convention. DC lobbyists will be in charge of making sure that Trump’s coronation in Cleveland goes smoothly—that the program proceeds without a hitch, that floor flights do not derail the convention, and that chaos does not interfere with Trump’s big moment. Larry Harlow, the son of legendary Washington fixture and lobbyist Bryce Harlow, is on the convention’s payroll at $10,000 a month, according to financial disclosure forms filed by the Republican National Committee. Harlow’s lobbying shop currently represents the American Medical Association; it previous worked for oil and energy companies, such as ConocoPhillips and Entergy. The filing doesn’t state what Harlow is doing for the convention, but he has been the director of official proceedings at the last three GOP presidential conventions.

Also on the GOP’s convention team is Bill Harris, a longtime DC operative who once lobbied for the US Chamber of Commerce and Quest Software Inc, and who served as CEO of the 2004 convention. The RNC has hired Wiley Rein, the powerhouse lobbying and law firm, to handle legal issues related to the convention. Wiley Rein represents many corporate clients, including AT&T, Verizon, 21st Century Fox, and CBS’s parent company.

The growing team of lobbyists working for Trump shows that certain parts of K Street—an important piece of the GOP establishment—are happy to jump on the Trump train. This is no surprise, since helping a GOP nominee is likely good for their business. Yet the message Trump sends by retaining and depending upon these guns for hire is that his outrage against the mercenaries who toil for corporate clients and special interests is highly selective. Trump is quite willing to embrace members of Washington’s money-grubbing, special-interest elite class, as long as they advance one particular interest: him.