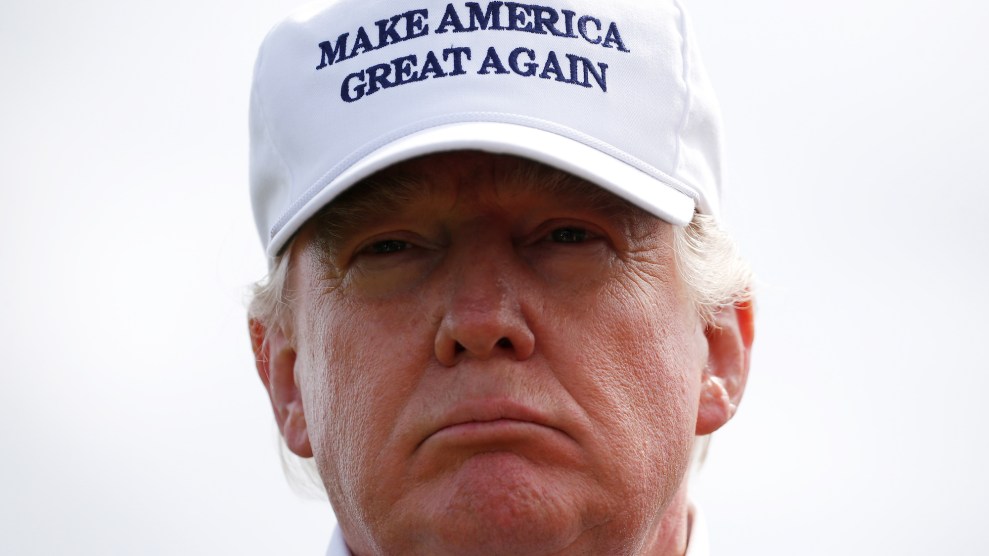 The subject heading on the email is eye-popping: “Have you heard about the Hillary indictment?”

But when you click on the email, which on Tuesday afternoon hit the inboxes of people on conservative lists (hours after House Republicans released their Benghazi report), the news is not that the feds have dropped the hammer on the presumptive Democratic presidential nominee. Instead, it’s Donald Trump, the apparent GOP nominee, begging for campaign cash.

In this email, he calls on voters to indict Clinton:

[O]n November 8th, the American people will finally have the chance to do what the authorities have been too afraid to do over these last 2 decades: INDICT HILLARY CLINTON AND FIND HER GUILTY OF ALL CHARGES.

For what? He doesn’t specify. But he suggests there are many options:

As I highlighted in my speech last week, during the Clinton Presidency, there were many, many scandals. TravelGate, Whitewater. The personal destruction of Monica Lewinsky. The Rose Law Firm scandal. And, of course, anything involving Sydney Blumenthal.

Actually, that’s Sidney-with-an-i Blumenthal, a longtime aide and associate of Clinton. And it’s quite a move for a candidate to insinuate that someone associated with a political foe has engaged in illegal conduct, without offering any details.

Benghazi…Her illegal email server…The donations from terrorist nations to the Clinton Foundation. The list goes on and on.

In the past few decades of American politics, there has often been fierce rhetoric exchanged between presidential campaigns and their advocates, but the candidates have usually stayed within certain respectful boundaries. The dirty work has generally been done by surrogates and side groups. (Think of the Swift Boat outfit that went after John Kerry in 2004.) Trump has cast aside all notions of civil debate. He resorts to name-calling and schoolyard taunting. And now he’s raising money with a misleadingly titled email aimed at conservatives that suggests Clinton has been indicted. That’s sure to get them to click.

In the email, Trump repeatedly asks for a contribution. But he also claims that Clinton is lying when she says she is “crushing” Trump in fundraising. He adds, “This claim is laughable. i can write my campaign a check at any time.”

Perhaps. But then why is he resorting to such an unconventional measure to raise money?