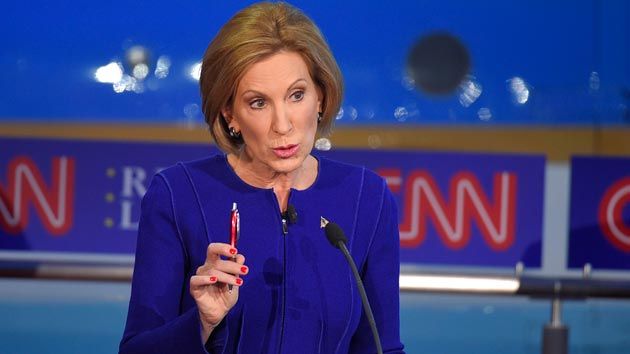 Fiorina left the race in February, on the heels of poor numbers at the polls—and many stories about her shoddy business record and her propensity for stretching the truth. Now that she’s back in the race, let’s take a stroll down Fiorina memory lane:

“Can a CEO Who Laid Off Thousands, Botched a Merger, and Left With $21 Million Become President?“: At the heart of Fiorina’s leadership experience is her time as the CEO of HP, from 1999 to 2005. But under her watch, the company lost millions of dollars and enacted a merger with Compaq that has widely been deemed a corporate failure.

“Carly Fiorina Makes a Lot of Stuff Up About Everything“: From discussions of her chummy relationship with Russian President Vladimir Putin to HP’s alleged violations of the Iran embargo, we put together a nonexhaustive list of Fiorina’s embellishments.

“Fiorina Super-PAC Makes Its Own Abortion Video“: After Fiorina described a grisly abortion video during a GOP debate in September, multiple media outlets pointed out that the video didn’t exist. In response, her super-PAC created a version of the previously nonexistent video.

“Carly Fiorina’s Fact-Defying Stump Speech“: Fiorina dropped several shocking statistics during a campaign speech in Iowa. Among other dubious claims, she said that in the previous year 307,000 veterans had died before they received health care from the Department of Veterans Affairs and that the tax code is 73,000 pages. We fact-checked the numbers.

“Fact-Checking Carly Fiorina on Women’s Job Losses Under Obama“: Here are more surprising stats trumpeted by the former presidential candidate, and more fact-checking showing that her numbers don’t add up.

“Carly Fiorina Isn’t Just Attacking Planned Parenthood at the Debates“: While her presidential campaign was in full swing, Fiorina recorded a robocall that was blasted throughout California encouraging voters to support a ballot measure that would require parental notification before an underage girl can terminate a pregnancy. The measure has been a main goal of California’s anti-abortion advocates for the past decade, and fighting it on ballot after ballot has drained Planned Parenthood’s money and time for years.

“Little Did These Adorable Kids Know That Carly Fiorina Was Using Them as Anti-Abortion Props“: On her way into an anti-abortion rally in Des Moines, Iowa, Fiorina stumbled upon a group of four- and five-year-olds on a field trip to a botanical garden. Fiorina ushered the kids onto the stage of the rally, where they sat at her feet while she gave a speech—against the backdrop of an enormous photo of a fetus.