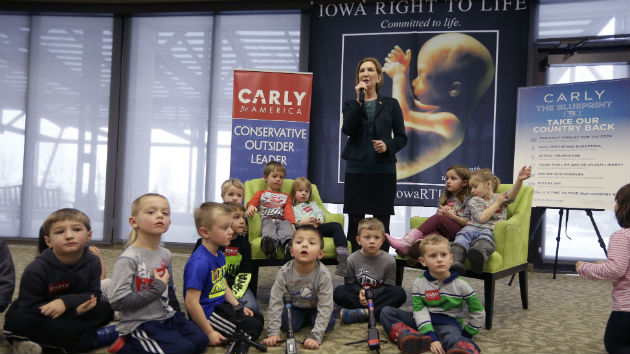 Carly Fiorina has upset some Iowa parents, who say the presidential candidate “ambushed” their children and used them as the backdrop of an anti-abortion rally.

On Wednesday, the former Hewlett-Packard executive was attending an anti-abortion rally at the Greater Des Moines botanical garden as part of a campaign stop in Iowa. After entering the gardens, she passed a group of preschoolers on a field trip. According to the Des Moines Register, Fiorina “headed straight for a group of giggling 4- and 5-year-olds,” and ushered them onto the rally’s stage and beneath a giant picture of a fetus.

The presidential candidate has made her opposition to abortion a central part of her campaign. During the second GOP primary debate in September, Fiorina claimed she’d seen video of a “fully formed fetus on the table, its heart beating, its legs kicking, while someone says we have to keep it alive to harvest its brain.” (As Mother Jones reported soon after, the footage she described was fabricated by Carly for America, the super-PAC backing her candidacy.) Fiorina also recently told Fox News that she believes most Americans agree with her that abortion should be banned “for any reason at all after five months.” Nearly 20 states ban abortion after about 20 weeks, or five months, of pregnancy, but most allow exceptions for the life and health of the pregnant woman.

But Fiorina’s spontaneous inclusion of the children at her pro-life rally on Wednesday has upset at least one parent, who says the candidate did not get permission to use the children during the event. “The kids went there to see the plants,” Chris Beck, the father of a four-year-old at the event, told the Guardian. “She ambushed my son’s field trip”

“Taking them into a pro-life/abortion discussion [was] very poor taste and judgment,” Beck continued, adding, “I would not want my four-year-old going to that forum—he can’t fully comprehend that stuff. He likes dinosaurs, Teenage Mutant Ninja Turtles and Transformers.”

Sarah Isgur Flores, Fiorina’s deputy campaign manager, refuted the claim that Fiorina forced the children to attend her event, saying that the group followed her onto the stage. “I guess the kids must have thought she was pretty neat,” Flores said, “because then their teachers and parents and the kids all followed Carly into the event complete with Carly stickers.”