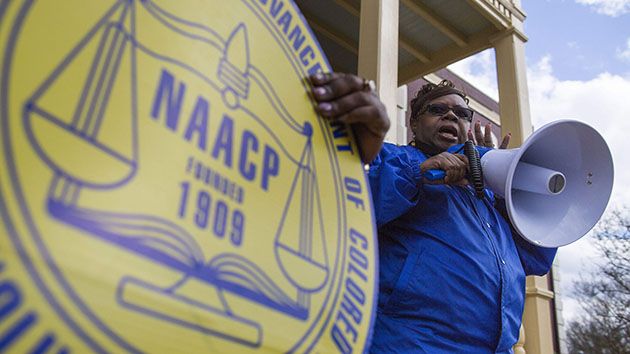 The Rev. Portia Rochelle, president of the Raleigh-Apex NAACP chapter, before a Raleigh, North Carolina, march that was a part of the Souls to the Polls movement, on Sunday, March 6, 2016.Al Drago/Zuma

A coalition of civil rights groups say they will immediately appeal a federal judge’s ruling in North Carolina that upheld a sweeping set of voting laws that critics say unfairly target African Americans and other minorities. The laws included a photo ID requirement, the reduction of early voting days from 17 to 10, the elimination of a same-day registration and voting program, and a project to preregister 16- and 17-year-olds to vote. The law also prevented ballots from being counted if they were cast in the wrong precinct.

“We’re not talking about things that the legislature proposed and then they didn’t vote on them,” the Rev. William J. Barber II, president of the North Carolina State Conference of the NAACP, told reporters on Tuesday. “We’re talking about access.” Barber explained that the laws in question had been on the books for several election cycles and had “substantially increased” voting access for people of color. The measures that the civil rights community had fought for in order to address the inequities of the past, he said, “were removed, taken away from African Americans, Latinos, and other people of color by this legislature.”

State Republicans have defended the law as a means to ensure fair and honest elections. In a statement following the judge’s decision, Republican Gov. Pat McCrory said the ruling “further affirms that requiring a photo ID in order to vote is not only common sense, it’s constitutional.”

North Carolina’s voting law—technically known as North Carolina Session Law 2013-381—was enacted in August 2013 after the US Supreme Court’s Shelby decision. In that decision, the Supreme Court struck down a key part of the Voting Rights Act that determined which states and counties must adhere to strict guidelines governing any change to their voting laws. The mechanism had been used for decades to determine which jurisdictions had to have changes to election law or procedure precleared by the US Department of Justice or a federal judge.

The day North Carolina’s new law was signed, the NAACP and the League of Women Voters sued to block it. Other challenges were filed, and all of them were eventually consolidated into this case. In the fall of 2014, a federal appeals court placed an injunction on two parts of the bill (the ban on same-day registration and the ban on counting ballots cast outside a voter’s precinct), and remanded the case back to the district court for a full hearing.

This week’s 479-page ruling, issued by US District Court Judge Thomas D. Schroeder, dismissed all the claims against the bill but preserved the injunctions against killing same-day registration and out-of-precinct voting through the state’s June 7 primary elections. If the 4th Circuit Court of Appeals doesn’t take up the case, all of the law’s provisions will be in place for November’s general election.

Penda Hair, co-director of the Advancement Project, a civil rights organization that targets young people and is one of the parties in the case, said the groups will be seeking an expedited decision from the federal appeals court, calling the potential impact on the November 2016 presidential election “devastating.”

“We expect a very, very high turnout in that election,” she told reporters Tuesday. “With all of these provisions that suppress the vote interacting together,” she predicted the impact would be most severe on African Americans, seniors, and other minority populations.

Marc Elias, a lawyer representing some younger voters in this case (as well as the Democratic National Committee and others in a recently filed suit in Arizona, and plaintiffs in another voting rights case in Wisconsin), told Mother Jones on Tuesday that he was “disappointed in the trial court’s decision” but looked forward to an expeditious appeal.

The ruling relied on data from the state’s 2014 primary midterm election, in which voter turnout increased across the board.

“The 2014 data merely confirm what the remaining data suggest: that minorities enjoy equal and constitutionally-compliant opportunity to participate in the electoral process,” Schroeder wrote in his decision. He said that while many factors play into the registration and turnout data for 2014, the plaintiffs in this case were unable to demonstrate any connection between the new laws and increased hardships for minority voters. “The evidence shows that, like all voters, African Americans are not only capable of adjusting, but have adjusted to [the new voting laws].”

But the plaintiffs in the case argue that using turnout numbers from the 2014 election in isolation skews the true impact of the law. Michael Glick, an attorney at Kirkland & Ellis who worked on the case, told reporters Tuesday that the 2014 election “presented unique circumstances,” which include a massive mobilization campaign during a high-profile midterm election.

Barber, from the NAACP, characterized Schroeder’s reliance on 2014 election data as a “dangerous rationalization” and said it doesn’t prove the law isn’t discriminatory, only that the affected groups were able to work hard and partially overcome that discrimination.

Barber said the implications of the case go far beyond North Carolina.

“This battle against this kind of intentional voter suppression—where people know they cannot win if everybody votes, so they engage in this kind of suppression—has deep moral, political, and social impact on the very state of this nation,” he said. “That’s why this North Carolina battle is the epicenter of deciding if America’s going to go forward or if we’re going to go backward.”