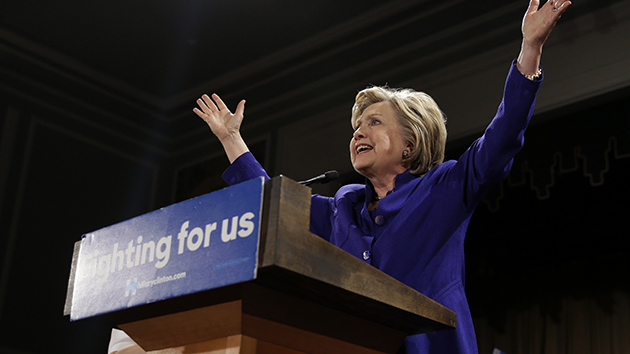 With 35 percent of precincts reporting, Clinton led Sanders by more than 20 percentage points, although exit polls showed her with a much narrower lead. The major networks called the race for Clinton about 45 minutes after polls closed.

Clinton was expected to do well in the state she served as senator for eight years. The state’s racially diverse population fits the profile of the states that have previously backed Clinton, while New York’s closed primary rules benefited her by preventing independents and Republicans from crossing over to support Sanders. Heading into Tuesday, polls showed Clinton leading Sanders by an average of 12 percentage points, according to Real Clear Politics.

The question Tuesday night was not whether Clinton would win, but whether she would be able to pull out a big victory in a state where nearly every factor works to her advantage. If Sanders had exceeded expectations—or even defeated Clinton—it wouldn’t have significantly changed the delegate math that continues to favor Clinton, but it would have given Sanders another jolt of momentum and served to embarrass a Clinton campaign that struggled in recent contests in the western part of the country.

On the Republican side in New York, where Donald Trump won by a wide margin, the most important question Tuesday was how many delegates each candidate would rack up, as Trump tries to secure a delegate majority and Ted Cruz seeks to force a contested convention. But on the Democratic side, the calculation was different. Because of New York’s proportional delegate allocation, the state’s primary was never going to change the basic delegate math. Instead, it was all about momentum and whether Clinton would be further hobbled.

The Sanders campaign knew the stakes and worked hard in the state. It outspent Clinton’s campaign two to one on the airwaves, with two ads that played up Sanders’ New York roots, calling him a “native son.” On the ground, the campaign worked closely with the Working Families Party, a progressive party with an impressive ground game in the state, in order to boost its get-out-the-vote operation.

Meanwhile, Clinton highlighted her work as a senator, releasing several ads stressing her advocacy for struggling communities in the state. In the final days of the primary, Clinton campaigned vigorously in New York City, while Bill Clinton and Chelsea Clinton held events across the city and state. Sanders held three major rallies in the city in the final week of the campaign.

From here, the race moves to five more contests in Northeastern states, where Sanders is unlikely to put a dent into Clinton’s delegate lead.