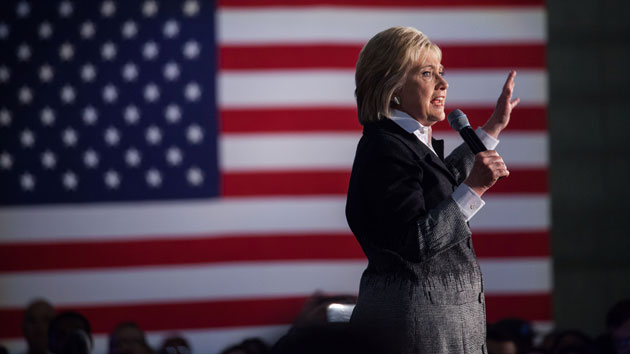 There’s a pattern to the way Hillary Clinton’s campaign has discussed Bernie Sanders’ leftist politics: long periods of silence punctured by the occasional drive-by when Sanders creeps too close in the polls. Clinton backer Sen. Claire McCaskill (D-Mo.) first mused in June that Sanders was getting a pass on his socialism from the media, after her Senate colleague’s stadium-filling megarallies offered the first hint that he posed a serious threat. Then there was peace again, until January. With the Clinton campaign slipping in Iowa and New Hampshire, McCaskill told the New York Times that Republicans “can’t wait to run an ad with a hammer and sickle.” Clinton surrogate David Brock warned ominously that Sanders’ comments on the capitalist system in the 1980s would doom him in November.

At Wednesday night’s Democratic presidential debate in Miami, coming off a stunning loss to Sanders in Michigan, Clinton opened up the research drawer her surrogates had riffled through before. It started when Univision anchor María Elena Salinas asked Sanders to explain how his brand of democratic socialism differed from that practiced in places like Nicaragua and Cuba. Then she played a clip of a press conference Sanders held in 1985, in which he praised Nicaraguan President Daniel Ortega and suggested the United States had misjudged Fidel Castro. Did he regret it?

Sanders didn’t quite answer, but Clinton ran with it. “I think in that same interview, he praised what he called the ‘revolution of values‘ in Cuba and talked about how people were working for the common good, not for themselves,” she said. “I just couldn’t disagree more. You know, if the values are that you oppress people, you disappear people, you imprison people or even kill people for expressing their opinions, for expressing freedom of speech, that is not the kind of revolution of values that I ever want to see anywhere.”

It was one of Clinton’s most direct attacks yet on Sanders’ embrace of leftist politics (although, in Sanders’ defense, Castro had himself replaced an American-backed regime that oppressed, imprisoned, and tortured people). By the next day, however, she’d dropped the issue. Clinton held her first post-debate rally in Ybor City, Tampa’s historic Cuban neighborhood, which would have been an obvious setting to continue this line of criticism. The Cuban independence leader José Martí organized cigar workers there, and the Cuban government still owns a small park celebrating Martí down the street from the venue where Clinton spoke. But Clinton made no mention of Castro or Ortega or socialism or Cuba. She hardly mentioned her opponent at all.

There’s a good reason why Clinton’s reprisals of Cold War politics don’t stick around for long: Voters don’t really seem to care about Cold War politics. Castro is not a popular figure, but it’s harder to turn him into a bogeyman in a Democratic primary when it was the popular Democratic president who normalized relations with the Castro government (and a president for whom Clinton served as secretary of state). The fights over the Sandinistas in Nicaragua that once tore the left apart are recent history only in the context of geologic time—the young voters Clinton says she’s hoping to win over weren’t even alive for it, and the median age at a Sanders event in Florida this week hovers around 20. When I asked one young attendee at Clinton’s Ybor City event about Sanders and Ortega, she told me she didn’t know anything about Ortega and would have to look him up.

The clearest sign of the demise of Cold War politics in Florida, though, came from the party that’s historically been most enthusiastic about reprising it. Sen. Ted Cruz (R-Texas) didn’t bring up Castro either at his speech to the largely Cuban American audience in Miami on Wednesday, at a college across the street from a piece of the actual Berlin Wall. And although he and Rubio both trashed President Barack Obama’s new diplomatic relationship with Cuba at the final Republican debate before the Florida primary, one candidate held firm in defense of ending the trade embargo: the odds-on favorite to win the state, Donald Trump. “After 50 years, it’s enough time, folks,” he said, before promising to “make a good deal” with the Cubans. Even the king of bluster thinks the bluster about Castro has run its course. Florida voters appear to agree.