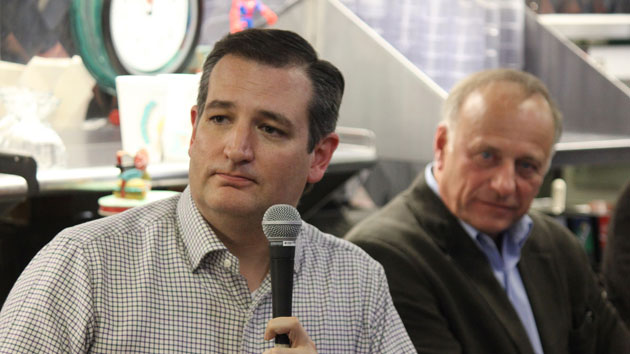 Appearing at a packed theater at the College of Charleston, Cruz was accompanied by a squad of conservative favorites the day before voters hit the polls in the critical South Carolina Republican presidential primary. This group of Cruz backers included Rush Limbaugh’s brother, David, and Rep. Mark Sanford, who was once governor of the state and famously caused a scandal when he disappeared to see a mistress but told his staff he was hiking the Appalachian Trail.

Yet it was Robertson the audience came to see; some supporters even brought their own duck calls. Robertson tried to take front-runner Donald Trump down a notch by showing that Cruz has a reality television star of his own in his corner and, more important, God on his side.

Robertson’s endorsement of Cruz could almost fit in a tweet. As Fox News host Sean Hannity interviewed Cruz on the stage, Robertson, clutching a Bible, walked up in camo attire and declared, “I’m for Cruz because you see this in my hand? Bibles and guns brought us here. And it will be Bibles and guns that keeps us here. And this man owns them both.” Then Robertson picked up his camo backpack and walked back through the curtains.

About 15 minutes later, Robertson returned to the stage and read aloud from a book about presidents who pray. Prayer was the reason the United States won its independence, he explained, and it might be the only thing that could save the nation from its current fate. He expanded on his previous pitch for Cruz. “You say, ‘Phil, you either got mighty lucky or God blessed you,'” he said. “But you know something, South Carolina? Can all the money the money I evvvvver make, can it remove your sin, South Carolina? That money? What about all this fame I received—will it raise me from the dead? That’s why I follow Jesus. That’s why I vote for people who follow Jesus.”

Robertson continued: “We went with the atheists beginning about 50 years ago, and we’ve almost created in America a hell on Earth. Vote godly. I love you, and I love God. It’s the only way to roll.”

Cruz embraced Robertson warmly. In the past few days, Cruz has suggested that if he were elected president, he would nominate Utah tea party Sen. Mike Lee to the Supreme Court and ask Trump to build a wall on the Mexican border. Now he told the crowd there might also be a place for Robertson in his administration. “Can you imagine Phil Robertson as ambassador to the United Nations?” Cruz asked. “How much would you pay to see that?”

As the South Carolina contest hurdles toward its conclusion—and after Cruz has spent months hammering his opponents (especially Marco Rubio) on immigration—he is pushing a more fundamental message to voters on his final swing through the state: Vote for Cruz so that he can bring God back to America.

Cruz finished the event with a prayer. “If my people, who are called by my name, will humble themselves and pray and seek my face and turn from their wicked ways,” Cruz said, reciting from memory 2 Chronicles 7:14, “then I will hear from heaven, and I will forgive their sins.”

The audience knew the rest and finished the prayer with him: “And I will heal their land.”

By the way, here’s a commercial that Robertson made with Cruz a few weeks ago: