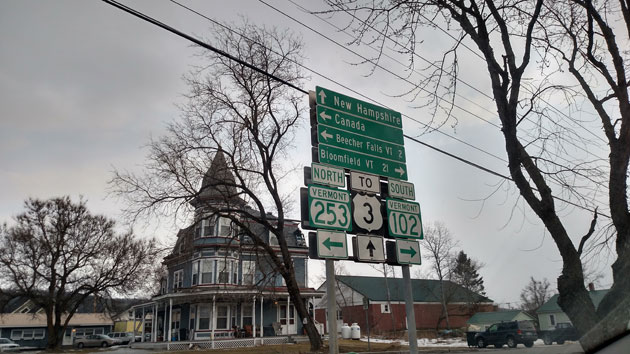 So many choices!Tim Murphy / Mother Jones

It’s hard to get too lost on your way to Pittsburg, New Hampshire (pop. 869). You just drive north for a while. And then you keep driving north for a while longer. Pittsburg is New Hampshire’s largest town by land area, covering nearly 300 square miles of North Country mountains and lakes and spanning the entire length of the state’s international border with Canada. It’s also one of the only corners of the nation’s first primary state where candidates never go.

In a year in which Republican candidates have made the Rio Grande a mandatory stop on the presidential campaign trail, trekking to McAllen, Texas, to stare grimly into the Mexican desert, the far vaster northern border—the one terrorists have actually tried to come across—is a much different story. Of the hundreds upon hundreds of town halls and meet-and-greets in the 2016 election cycle, only one happened in Pittsburg. And it was held by Lindsey Graham.

(It’s not just candidates who have a tendency to overlook Pittsburg; in the 1830s, it was excised from the United States by a vaguely written treaty, and it hummed along for three years as the independent republic of Indian Stream before the boundary was clarified.)

“[People] certainly can sneak through here, there’s no doubt about it,” said Laurie Urekew, braving the snow flurries on Saturday afternoon outside Young’s general store, an all-purpose grocery and gas station that features a punching bag of President Barack Obama by the register. “But it’s very vast here, so chances are someone from the southern area wouldn’t survive too much.” 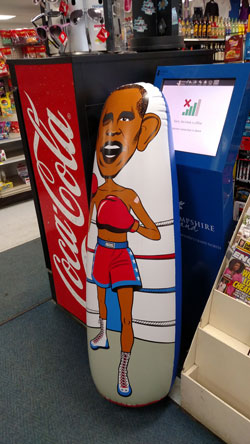 Urekew is a Republican (“the only good Democrat is a dead one,” she joked), who was torn between Donald Trump and Ted Cruz, provided the latter is ruled eligible. “I like Trump because we need somebody like him—he’s strong and yet he’s not afraid to be politically incorrect,” she said. But she trusts Cruz more than Trump to shut down the border—the southern one.

Although Trump is popular in the North Country, his warnings about a Canadian senator usurping the American government has hit with a thud—it’s just not that big of an issue. Canadian flags fly with American ones outside some houses, road signs are in French and English, and there’s a Quebecois radio station. The compelling local issue up north is not the border; it’s the proposed Northern Pass transmission line, which would cut through the North Country to bring hydroelectric power from Canada to the Northeast.* (The slogan that Northern Pass opponents have come up with is “Live Free or Fry,” which you have to admit, is pretty good.) Trump was asked about the Northern Pass at Saturday’s debate and gave it his seal of approval.

Wisconsin Gov. Scott Walker was widely mocked after briefly entertaining the idea of building a fence on the Canadian border last summer; he dropped out soon after. To the extent that Canada has played a determinative role in the New Hampshire primary, the concern has been what’s leaving the United States, not what’s coming in. Opposition to the North American Free Trade Agreement, and the subsequent loss of lumber jobs to Canada, helped propel Republican Pat Buchanan to victory in 1996. (Some Buchanan supporters did believe Russian tanks would invade the United States by way of Canada.)

When I asked Cal DelaHaye, who was working on a piece of funnel cake at Grampy’s diner in Pittsburg, if he thought more candidates should make the trek up north, he was emphatic. “No,” he said. “I’d tell them they’re wasting their time.”

There was one group of New Hampshire Republicans that was particularly concerned about the Canadian border threat. In 2006 and 2007, the New Hampshire branch of the Minutemen Civil Defense League made a few weekend trips to West Derby, Vermont, and Pittsburg, to draw attention to the great northern threat.

“One time we saw a guy who actually parked his car in the New Hampshire side and then backpacked, and it looked like he was hiking the Long Trail, and he headed north toward Canada, and we looked at his car later and it turned out he was from Canada,” said Ron Oplinus of Exeter, New Hampshire, who lead the chapter before it disbanded a few years back. “So we don’t know exactly what was going on but we didn’t see him again.”

Other than that, he conceded, “there wasn’t much” to see.

*Correction: An earlier version of the piece erroneously stated that Northern Pass would require eminent domain. Although Trump was asked if he thought the state should use eminent domain, it is not being proposed.