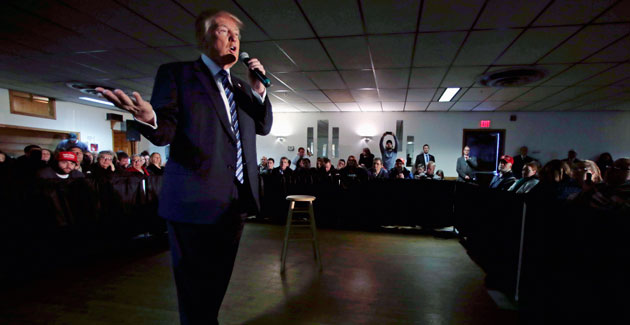 Has Jeb Bush finally gotten under Donald Trump’s skin? During a town hall this morning in Salem, New Hampshire, the real estate mogul and GOP front-runner spent an unusual amount of time trashing Bush, who is polling near the back of the pack heading into Tuesday’s primary, calling him a “lightweight,” “not a smart man,” “stiff,” and a “spoiled child.”

Throughout the campaign, Trump has relished in needling Bush, portraying him as a weak momma’s boy who would struggle to find a job outside of government. But his Bush-bashing has escalated on the eve of the primary, in which most polls suggest Trump is going to crush his competition by a sizable margin.

Does Trump have reason to think Bush is poised to do better than expected in New Hampshire and perhaps claw his way back into the race? Or does he just take special pleasure in belittling his struggling rival?

The rhetorical battle between both candidates has been escalating in recent days, as Bush continues to try to define himself as the “steady hand” in the race in contrast to the bombastic Trump. Bush even ventured as far as to brand Trump a “loser” recently—basically the equivalent of a four-letter word in the vocabulary of the genteel former Florida governor, who recently joked to a New Hampshire crowd that he had called his mom to apologize after calling Trump a “jerk.”

Bush has tried to land a solid hit on Trump for weeks, only to be swatted away by the brash tycoon, but he finally succeeded during Saturday’s debate, when the former Florida governor raised Trump’s attempted use of eminent domain to force an elderly woman out of her home in Atlantic City. Trump mocked Bush for “trying to be a tough guy.” But Bush, who has fumbled during similar moments in past debates, had a ready comeback: “How tough is it to take away property from an elderly woman?” When Trump put his finger to his lips and told Bush to be “quiet,” a chorus of boos erupted from the audience.

Fielding questions from voters at an Elk’s Lodge in Salem on Monday, Trump cycled through familiar refrains on the threat posed by Syrian migrants (“where the hell do they get their cellphones”) and securing the southern border (“no one’s going to be tougher”). And he repeated his controversial comments at Saturday’s debate that he would “bring back a hell of a lot worse than waterboarding,” saying “much tougher than that is fine…We can’t be soft and weak.” But he returned again and again to Bush, while steering clear of attacking his other opponents.

Later, after criticizing Bush’s remarks that some people come to the United States illegally as “an act of love,” Trump declared, “The last thing we need is another Bush.”

When asked whether he would consider appointing any of his fellow GOP contenders to a Trump presidential cabinet, Trump returned to Bush: “I like some of them,” he said of his rivals, before again singling out Bush for ridicule. “I don’t have a lot of respect for Jeb. Jeb’s a lightweight.”

Telling the audience that he “can’t be bought,” Trump raised Bush as a candidate who was under the thumb of big donors and special interests. “They have total control over this guy.” As he has in the past, Trump pointed to the Bush campaign’s finance chairman, Jets owner Woody Johnson, a member of the family who founded Johnson & Johnson, as an example of a wealthy donor who would control his candidate if elected to the presidency.

Making a final blitz through New Hampshire on Monday with a string of events that will culminate with a Manchester rally expected to draw thousands, Trump urged his supporters to head to the polls despite the snowy conditions. When one supporter said she would vote for him “10 times” if she could, he replied, “You know, in a lot of places in this country, they do vote 10 times.” He went on to suggest that voter fraud was rampant, including by undocumented immigrants who were voting multiple times in an election.

“Ten times?” he joked. “That’s okay. That’s a minimal number for some people.”