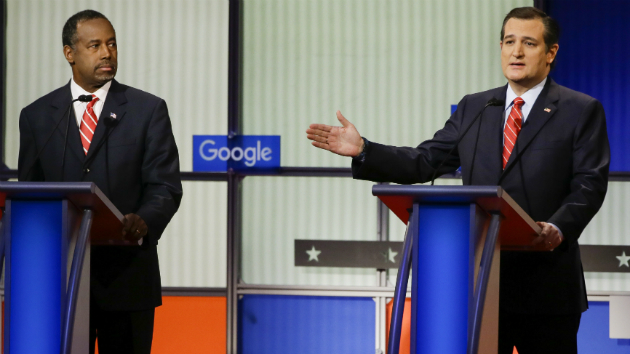 Well, Carson never quite said those words. But in an extraordinarily passive-aggressive press conference in Washington, DC, this afternoon, called “in response to deceptive Iowa caucus tactics,” Carson told reporters that voters should judge all candidates by the words of Jesus in the Book of Matthew, implicitly calling Cruz out for his involvement in an effort to mislead Iowa caucus voters into thinking Carson had dropped out of the race.

“I make no bones about the fact that I am a person of faith, and I believe it what it says in Matthew 7:20: ‘By their fruit you will know them,'” Carson told reporters. “You know people not by what they say, but by what they do.”

That line is actually the culmination of a longer verse about false prophets who turn out to be wolves:

“15 Beware of false prophets, who come to you in sheep’s clothing, but inwardly they are ravenous wolves. 16 You will know them by their fruits. Do men gather grapes from thornbushes or figs from thistles? 17 Even so, every good tree bears good fruit, but a bad tree bears bad fruit. 18 A good tree cannot bear bad fruit, nor can a bad tree bear good fruit. 19 Every tree that does not bear good fruit is cut down and thrown into the fire. 20 Therefore by their fruits you will know them.”

But Carson also refused to say he was talking about Cruz.

“I didn’t say a word about Ted Cruz,” Carson told reporters, when asked if he was talking about Cruz. “What I said is what we need to be able to do is look at a person’s life, look at the way a person does things and the way a person treats other people, and make a judgment.”

Carson also said Cruz told him that he knew nothing of the plans to spread false information. Carson challenged the senator from Texas to fire the staffer who was involved.

“Let me put it this way: When I discovered there were things in my campaign that I could not agree with, and after really doing an investigation, I made changes, and I think that’s what a good leader does,” Carson said. “If there are things that you don’t agree with, you have to make changes. Now, if he agrees with it, he doesn’t have to make changes. But it would be hypocritical, wouldn’t it, to go against your beliefs? If he agrees with it, no problem.”

Asked if he regretted telling reporters that he was leaving Iowa early, and thus sparking the rumors that he was dropping out, Carson denied saying that, even if his campaign did.

“I didn’t say it, so don’t blame me,” Carson told reporters, chuckling. “Is it okay after being on the road for almost three weeks to go home and get a fresh change of clothes? Or is that a problem? Does that make someone into an evil, horrible person?”