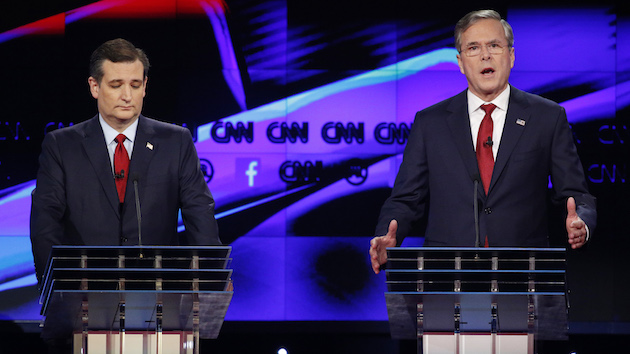 Huge hacks, Internet-savvy terrorists, and controversial legislation has made cybersecurity big news this year, but candidates from both parties barely mentioned the topic until Tuesday night’s Republican debate in Las Vegas. That’s when Republican candidates finally addressed cybersecurity and Internet privacy at length, but the results weren’t always pretty. Here are some of the lowlights:

1. Candidates demand encryption “backdoors.” Again: “There is a big problem. It’s called encryption,” said Ohio Gov. John Kasich, who delivered the night’s sharpest attack on encrypted Internet tools that allegedly help terrorists evade US law enforcement and intelligence services. Kasich, along with Sen. Lindsey Graham (S.C.) and former New York Gov. George Pataki, called for “backdoors,” or methods of decrypting message that would allow the government a way to read them. It was the latest episode in a debate that’s grown louder since the shootings in Paris and San Bernardino, California; there have been claims that both sets of attackers used encrypted messages to evade detection, though none of those claims have been proven. Nevertheless, key members of Congress on both sides of the aisle have said they’re working on a bill mandating backdoors in the wake of the attacks.

But encryption is also a vital part of the Internet’s basic infrastructure, and millions of people now use encrypted apps and programs to protect the privacy of their emails and messages. And giving the government access to encryption means allowing anyone else, including criminals, hackers, and foreign governments, access into those messages as well, according to cryptography experts.

2. Santorum thinks metadata isn’t personal information: Former Pennsylvania Sen. Rick Santorum was one of several candidates who wanted to undo the USA Freedom Act, the law passed in May that ended the National Security Agency’s ability to engage in a mass collection of the phone records of Americans. Santorum brushed the law aside, arguing the program didn’t impinge on people’s privacy. “This metadata collection is not collecting people’s phone calls, their voices, they’re not collecting information that’s personal,” he said at the undercard debate.

The first part is true, but the second isn’t even close. Metadata includes phone numbers, location data, call times, and other information that intelligence agencies use to create create extensive, detailed profiles of a target—or anyone else.

3. Donald Trump doesn’t understand how the Internet works: Trump again called for shutting down at least parts of the Internet to try and stop ISIS from using online tools to recruit and plan attacks. “I would certainly be open to closing areas where we are at war with somebody,” he said. Whether or not that’s possible—and it’s probably not, given that many people in Syria rely on satellite connections after years of war—it would likely be horrible for Syrians and Iraqis, whose countries’ communications’ infrastructures have been heavily damaged by war. Many Syrians rely on Internet connections to maintain contact with family and the outside world, and human rights activists rely on the web to document atrocities by the Assad regime and ISIS.

4. Fiorina comes up short on the tech test: Fiorina is trying to cast herself as the field’s technology expert thanks to her years leading Hewlett-Packard, one of the country’s biggest tech companies. “A lifetime of politics is not necessarily the right kind of experience anymore. It matters that you understand technology,” she told the conservative website Breitbart in a pre-debate interview on Tuesday. But her evidence of tech-savvy during the debate was nothing more than a story about helping the NSA in the days after 9/11 by sending them a large shipment of servers. Fiorina’s other big suggestion was to ask the private sector for help in improving cybersecurity, something that already routinely happens.

Fiorina also seemed clueless about the state of cybersecurity laws during the Breitbart interview. She claimed the Obama administration had ignored critical legislation that would let private companies share information on cyberattacks with the government. But at the same time the Republicans were debating on stage on Tuesday, House Speaker Paul Ryan (R-Wisc.) was wedging that same legislation, which Congress debated for months, into the trillion-dollar spending deal approved later that night.

5. Bush cheers China’s hacking of journalists: The Washington Post reported on Monday that when China stole millions of US government personnel records, it also got the information of journalists who had applied for government credentials—and Jeb Bush seemed pretty happy about it. “Maybe that’s the only part that’s good news, so you guys can get a feel for what it’s like now to see this type of attack,” said the former Florida governor, breaking briefly into an awkward half-smile.

6. Lindsay Graham says to get a flip phone: “This is why I own a flip phone, you don’t have to worry about all this stuff,” Graham quipped. Actually, your flip phone, in addition to being terrible, would still leave its records all over your cell carrier’s network for the government to access. Please do not listen to this awful advice. Also, Lindsey Graham now has an iPhone.

To be fair, cybersecurity also prompted the night’s most substantive exchange. Florida Sen. Marco Rubio attacked Sens. Rand Paul and Ted Cruz along with others who voted for the USA Freedom Act, which prevents the NSA from accessing or collecting records in bulk without a ruling from a federal judge. It’s proponents say the Act protects Americans from unconstitutional surveillance while making intelligence more effective, because investigators must target specific data and not drown in huge amounts of records. Both men hit back hard supporting the case for NSA reform. Cruz defended the law—and its national security benefits—so well that Sen. Ron Wyden (D-Ore.), the Senate’s most outspoken privacy advocate, backed him up in a press release issued during the debate.