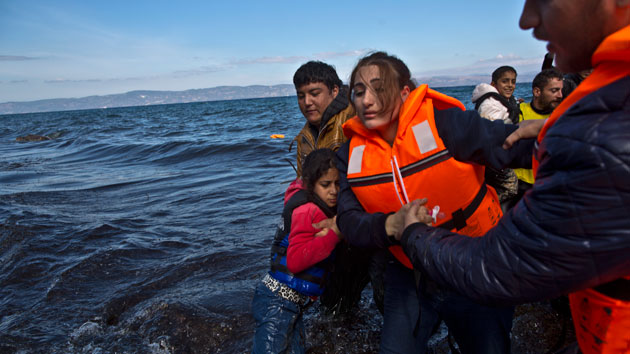 Since the terrorist attacks in Paris on Friday, more than half of America’s governors have issued statements saying they would bar Syrian refugees from entering their states—despite having no legal authority to do so and disregarding the nation’s strict vetting process for refugees. The statements come amid a rising tide of fear and anti-refugee sentiment among the American public: More than half of Americans polled by Bloomberg said the United States should not continue with plans to resettle 10,000 Syrian refugees, while a survey from NBC News published late Wednesday contained similar results. But at least a few American political leaders are pushing back.

Early Monday morning, Wolf sent a letter to lawmakers in Pennsylvania in response to Republicans calling on him to not accept Syrian refugees. He wrote, “We must not forget that those fleeing Syria—and other places in crisis—are families, elderly, and orphaned children seeking to escape a daily life that includes the same horrific violence that occurred in Paris…Our commonwealth can be a safe haven for refugees.”

Oregon Gov. Kate Brown
Brown took to Twitter on Tuesday to say that Oregon will “open the doors to opportunity” for displaced people.

The words on the Statue of Liberty apply in Oregon just as they do in every other state. https://t.co/A7hJcDznju 2/2

Sen. Elizabeth Warren
In a 12-minute address on the Senate floor on Tuesday, Warren of Massachusetts gave an impassioned critique of efforts to reject asylum seekers: “We are not a nation that delivers children back into the hands of ISIS murderers.” She added, “It is easy to proclaim that we are tough and brave and good-hearted when threats feel far away—but when those threats loom large and close by, our actions will strip away our tough talk and reveal who we really are.”

President Barack Obama
In a dig against Republican politicians, and particularly against New Jersey Gov. Chris Christie—who said he opposes US resettlement of Syrian refugees, even three-year-old orphans—Obama said on Tuesday, “Apparently they are scared of widows and orphans coming into the United States of America. At first, they were too scared of the press being too tough on them in the debates. Now they are scared of three-year-old orphans. That doesn’t seem so tough to me.”

Washington Gov. Jay Inslee
Inslee, in an interview with NPR on Wednesday, stated that he would not be joining the growing list of governors opposing refugees. Referencing Japanese internment camps, he noted:

“I live on Bainbridge Island, this little island just west of Seattle. And it was the first place where we succumbed to fear, in 1941 after Pearl Harbor…And we locked up Washington and American citizens, and we sent them to camps for years while their sons fought in the Army in Italy and were decorated fighting for democracy…We regret that. We regret that we succumbed to fear. We regret that we lost moorage for who we were as a country. We shouldn’t do that right now.”