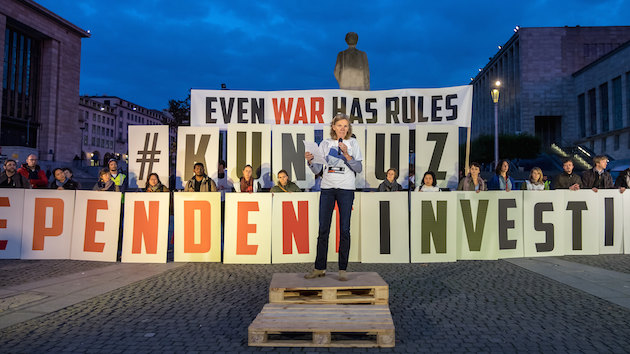 A protest in Brussels calling for an independent investigation into the attack on a Kunduz hospital run by Doctors Without Borders.Reporters/ZUMA Press

Doctors Without Borders blasted the US government on Thursday for an airstrike on one of the aid group’s hospitals in Kunduz, Afghanistan, last month.

“The chronological review of the events leading up to, during, and immediately following the airstrikes reveal no reason why the hospital should have come under attack,” Doctors Without Borders wrote in a statement. “There were no armed combatants or fighting within or from the hospital grounds.”

The attack, carried out by a heavily armed AC-130 gunship, lasted for more than an hour and killed at least 30 people. The Pentagon initially claimed the hospital was struck by accident, but later news reports said special operations soldiers called in the strike because they believed the Taliban were using the hospital as a base. The decision to attack the hospital anyway may qualify the strike as a war crime under international law.

In a report released Thursday, Doctors Without Borders acknowledged that the hospital was treating “wounded combatants from both sides of the conflict in Kunduz.” But officials from the group, known internationally as Médecins Sans Frontières, said it was not being used for any military purpose. “The MSF trauma center in Kunduz was fully functioning as a hospital with surgeries ongoing at the time of the US airstrikes,” said Dr. Joanne Liu, the group’s international president. “MSF’s no-weapons policy was respected and hospital staff were in full control of the facility prior to and at the time of the airstrikes.”

The report may partly be an attempt to prod the US government into conducting its own investigation, which the Pentagon said it would deliver within 30 days of the Oct. 3 attack—a deadline that passed this week. The Daily Beast reported on Tuesday that Doctor Without Borders believes “the U.S. military has stonewalled attempts for an independent investigation of the incident.” The US Army also drove a tank into the destroyed hospital last month, potentially wrecking vital evidence at the site. “Their unannounced and forced entry damaged property, destroyed potential evidence and caused stress and fear,” Doctors Without Borders said at the time.