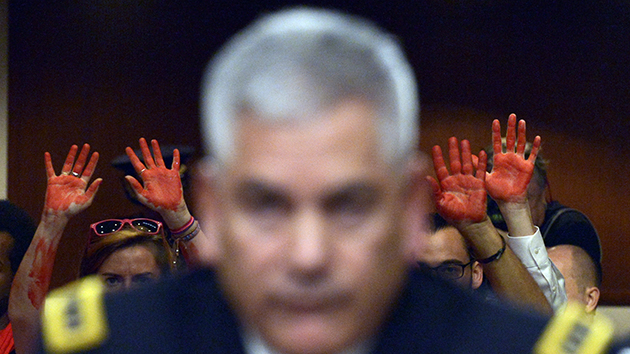 Protesters hold up their hands painted red as the commander of US forces in Afghanistan, John Campbell, testifies during a Senate Armed Services Committee hearing on Capitol Hill on October 6 about the bombing in Kunduz.Yin Bogu/Zuma

Update: The Associated Press reported on October 15 that American special operations analysts knew that the site bombed by a US warplane in Kunduz on October 3 was a protected medical site. Médecins Sans Frontières maintains that the United States did not provide advance warning of the airstrike that would have allowed for the evacuation of non-combatants.

On October 3, just after 2 a.m., a US AC-130 warplane dropped its first bombs on a Médecins Sans Frontières (Doctors Without Borders) hospital in Kunduz, Afghanistan, beginning an attack that lasted more than an hour. The strikes killed 12 MSF staff and 10 patients, including three children, and they wounded 37 others.

“Those people that could had moved quickly to the building’s two bunkers to seek safety,” Heman Nagarathnam, MSF’s head of programs in northern Afghanistan, who was in the hospital at the time, said in a statement. “But patients who were unable to escape burned to death as they lay in their beds.”

After news of the attacks spread, MSF withdrew from Kunduz and demanded an independent investigation, describing the incident as a “war crime.” Zeid Ra’ad Al Hussein, the UN high commissioner for human rights, called the attack “tragic, inexcusable, and possibly even criminal.”

But should it be considered a war crime?

“We don’t know yet,” says Leonard Rubenstein, director of the Program on Human Rights, Health and Conflict at the Bloomberg School of Public Health and Johns Hopkins University. Under the Geneva Conventions, hospitals can’t legally be deliberately targeted for a military attack. In cases where the enemy is using hospitals as cover, however, they can become legitimate military targets. Also, care must be taken to keep the attack proportional to the threat, and to avoid civilian casualties.

Rubenstein explains that the key is understanding whether the US military knew the building was a hospital when it launched the attack and, if so, whether steps were taken to warn civilians that the attack was coming and to minimize harm. He says an independent investigation is needed to determine what the United States knew and when.

Ultimately, the International Criminal Court would be the judicial body to hear a war crimes case against the United States, but it’s “highly unlikely” that would happen, Rubenstein says. The ICC looks at patterns of violations, not single incidents. Additionally, the United States and NATO are already investigating the incident, so under the “rule of complementarity” the ICC becomes a venue of last resort. If the US and NATO investigations can be defended as reasonably thorough and objective, it would be hard to bring a case to the ICC. Finally, the United States would resist going in front of the ICC, a point admitted to reporters on Monday during a briefing by State Department spokesman Mark Toner.

“To be clear, the decision to provide (airstrikes) was a U.S. decision, made within the U.S. chain of command,” Gen. Campbell told the Senate Armed Services Committee on Tuesday.

MSF says it had previously informed US and Afghan officials of the facility’s exact location multiple times, most recently on September 29. In the four days following the bombing, the US government changed its story four times. Initially, the US military said it conducted an airstrike in Kunduz “against individuals threatening the force.” A day later, Colonel Brian Tribus, a spokesman for US Forces-Afghanistan, claimed the airstrike targeted insurgent forces “in the vicinity” of the hospital “who were directly firing upon U.S. service members.” The next day, the explanation was that the Afghans had requested the strike and, counter to initial reports, that American forces were not “threatened.” General John Campbell, commander of US forces in Afghanistan, said civilians were “accidentally struck.” On Tuesday, the latest version of the story was that the United States called in the airstrike themselves at the request of the Afghans. The United States, NATO and the Afghans are now investigating the incident.

“To be clear, the decision to provide (airstrikes) was a US decision, made within the US chain of command,” Campbell told the Senate Armed Services Committee on Tuesday. “The hospital was mistakenly struck. We would never intentionally target a protected medical facility.”

But MSF notes that the “attack cannot be brushed aside as a mere mistake or an inevitable consequence of war.” In a statement posted to its website Tuesday, MSF wrote, “Statements from the Afghanistan government have claimed that Taliban forces were using the hospital to fire on Coalition forces. These statements imply that Afghan and US forces working together decided to raze to the ground a fully functioning hospital, which amounts to an admission of a war crime.”

Even if the Taliban had been using the hospital—a claim MSF denies—the Geneva Conventions still require the United States to attempt to minimize harm and alert civilians so that innocents can get out of harm’s way. “If the Taliban were there, it doesn’t mean that [the US and Afghan forces] have the right to kill all the patients,” Rubenstein says. “They still have to take concrete steps to minimize harm.”

Jonathan Horowitz, a legal officer at the Open Society Justice Initiative and a former adviser to the US embassy in Kabul, says careful planning and international law exist to prevent similar situations.

“People say these things happen in ‘the fog of war.’ My view is that a lot of international humanitarian law is meant to reduce the fog, assuming it’s carried out the way it’s supposed to.”

“If that planning is in place, not only is it supposed to reduce the chances of civilian harm, but it also gives you a mapping of what the military knew and should have anticipated,” he says. “There should be mechanisms in place so that they do know. That’s precisely why MSF gave the US and the Afghans the coordinates of their facility. People say these things happen in ‘the fog of war.’ My view is that a lot of international humanitarian law is meant to reduce the fog, assuming it’s carried out the way it’s supposed to.”

Although there’s a long history of the United States bombing medical facilities, the United States has tried to distinguish those attacks from the attacks carried out by regimes such as Bashar al-Assad’s in Syria. Despite its previous history, Rubenstein says the United States has been a leader in global forums, such as the United Nations and the World Health Organization, in advocating against attacking medical facilities. “When [the US] does something like this, it kind of undermines the efforts of protection worldwide,” he says. “If it turns out that they did know, and they didn’t warn, and they did attack, then there is a legitimate comparison between what the US military did and what these other regimes are doing.”

Patrick Skinner, an analyst at the security consulting firm Soufan Group and a former CIA officer, agrees: “Just because it’s not intentional doesn’t mean it’s not criminal. And that it was ‘a mistake’ doesn’t make the families of those killed feel any better.”