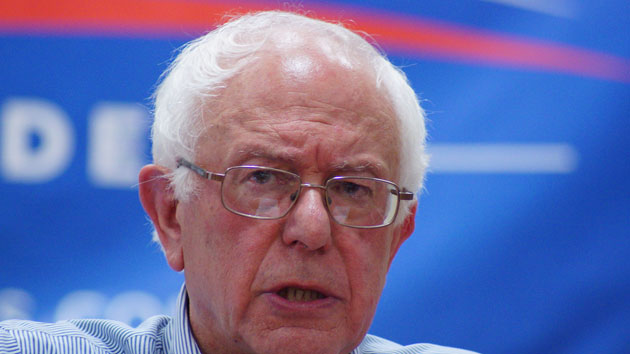 In a speech at Georgetown University on Thursday afternoon, Sen. Bernie Sanders, the independent from Vermont who’s seeking the Democratic presidential nomination, did something unprecedented for a major candidate: He made the case for democratic socialism.

The address, which Sanders wrote himself, had been in the works for weeks, and in it Sanders embraced a label that has most often been used to attack him. (At the first Democratic presidential debate last month, front-runner Hillary Clinton distanced herself from Sanders’ “democratic socialist” views.) At times, this address sounded much like Sanders’ stump speech: He railed against Wall Street, the “ruling class,” and the billionaire Koch brothers. But he tied those stances to an ideology that he contended was an essential part of the United States’ heritage.

Sanders began his speech—the text of the prepared remarks is here—with a throwback to Franklin Roosevelt. Throughout the decades, he argued, “socialist” has been a term conservatives deployed when Democrats do something popular:

Almost everything [Roosevelt] proposed was called “socialist.” I thought I would mention that just in passing. Social Security, which transformed life for the elderly in this country, was defined by his opponents as “socialist.” The concept of the “minimum wage”—that workers had to be paid at least a certain amount of money for their labor—was seen as a radical intrusion into the marketplace and was described as “socialist.” Unemployment insurance (the idea that if you lose your job at least you have something to fall back), abolishing child labor, the 40-hour work week, collective bargaining (the rights of workers to engage in negotiations with a union), strong banking regulations, deposit insurance, and job programs that put millions of people to work were all described, in one way or another, as “socialist.” Yet as you all know, all of these programs and many more have become the fabric of our nation and in fact the foundation of our middle class.

Thirty years later after Roosevelt’s speech, in the 1960s, President Lyndon Johnson fought for Medicare and Medicaid to provide health care to millions of senior citizens and families with children, persons with disabilities and some of the most vulnerable people in this country. Today Medicare does not seem to be such a terribly radical idea, to say that once they get old they should have medical insurance, but when it was proposed once again we heard right-wing forces describe these programs as socialistic and a threat to our American way of life.

This was not the first time Sanders has defended the “socialist” label, which he has embraced with varying degrees of enthusiasm throughout his long political career. But it was the first time he has done it so aggressively. He was attempting to take the term back from its critics and turn it into a positive. The message was clear: Yes, he is a democratic socialist, and you should be, too. He explained:

Let me define for you, simply and straightforwardly, what democratic socialism means to me. It builds on what Franklin Delano Roosevelt said when he fought for guaranteed economic rights for all Americans. And it builds on what Martin Luther King Jr. said in 1968, when he stated that, “This country has socialism for the rich, and rugged individualism for the poor.” It builds on the success of many other countries around the world that have done a far better job than we have in protecting the needs of their working families, the elderly, the children, the sick, and the poor.

The speech was something of a preemptive strike against those who would use the s-word to brand Sanders an out-of-the-mainstream, capitalism-hating Bolshevik:

The next time you hear me attacked as a socialist—like tomorrow—remember this: I don’t believe government should take over the grocery store down the street or own the means of production, but I do believe that the middle class and the working families of this country who produce the wealth of this country deserve a decent standard of living and that their incomes should go up, not down.

I believe that most Americans can pay lower taxes if hedge fund managers who make billions manipulating the marketplace finally start paying the taxes that they should.

I despise appeals to nativism and prejudice of which we have been hearing a lot in recent months, and I do believe in immigration reform that gives Hispanics and others a pathway to citizenship and a better life.

At this point in his speech, Sanders added a few choice words about Donald Trump, essentially calling him a racist:

And while I’m on that subject, let me just say a real word of concern from what I’ve heard from several Republican candidates for president over recent months. Because people can have honest disagreements about immigration, but people should not be using the political process to inject racism into the debate. Donald Trump and others who refer to Latinos, as peoples from Mexico, as criminals and rapists, if they want to open that door, our job is to shut that door. This country has gone too far. Too many people have suffered and too many people have died for us to continue to hear racist words coming from major political leaders.

Sanders also took a veiled dig at Clinton, whose surrogates have tarred him in the press for his “extreme” socialist views. “I’m not running for president because it’s my turn,” he said. “Not quite—I was born in a three-and-a-half room apartment in a working-class family in Brooklyn, New York.”

Democratic socialism, Sanders asserted, was part of the American fabric: “Now I don’t believe in some foreign ‘ism,’ but I believe deeply in American idealism.”

Sanders, who has focused mostly on domestic economic policy in the wake of last week’s terrorist attack in Paris, has no plans to deliver a similar address on foreign policy. Tad Devine, one of Sanders’ top advisers, told the Wall Street Journal earlier this week that it would take too much time to write. But during the Georgetown address, Sanders tied his foreign policy vision to Franklin Roosevelt and economic justice: “No one understood better than FDR the connection between American strength at home and our ability to defend America at home and across the world.”

Turning to the Paris attacks and ISIS, Sanders noted, “We must create a new organization like NATO to defeat the threats of the 21st century.” Such a coalition would include not just the Western European nations that make up NATO but also Russia and the members of the Arab League. “Some of the most wealthy and powerful nations in the region, who up to this point have done far too little,” must step up, Sanders said. And he gave one example:

Qatar will spend $200 billion on the 2022 World Cup, including the construction of an enormous number of facilities to host that event—$200 billion on hosting a soccer event, yet very little to fight against ISIS…All of this has got to change. Wealthy and powerful Muslim nations in the region can no longer sit on the sidelines and expect the United States to do their work for them.

Even in his foreign policy remarks, Sanders managed to slam the 1 percenters.