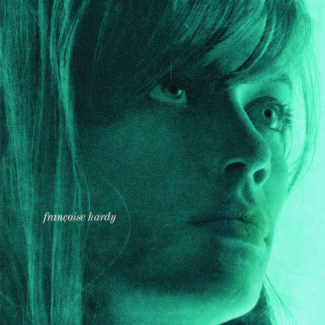 Often mistakenly described as one of the yé-yé girls of French pop, teenager Francoise Hardy achieved instant stardom in 1962 with the beautifully melancholy hit “Tous les Garcons et les Filles,” and became an international sensation. Unlike the bubbly yé-yé singers, who were attuned primarily to the latest chart sounds, she mixed more traditional influences like Charles Aznavour and Jacques Brel with contemporary elements. Her elegant singing eschewed youthful exuberance for a serene gravity that would serve her well over the course of a career that has thrived into the current century.

Recording in English, Italian, and German, as well as French, she wrote much of her own material, a rarity for female singers of the day. The photogenic Hardy socialized with members of the Beatles and the Stones, and was famously pursued (to no avail) by Bob Dylan, who addressed a poem to her on the back of his 1964 album Another Side of Bob Dylan. While America has proven immune to Hardy’s alluring artistry, the wonderfully idiosyncratic Seattle reissue label Light in the Attic is seeking to rectify that by reissuing her first five French-language albums from 1962 through 1966. Taken as a whole, they tell the engrossing story of an ongoing evolution, as echoes of folk, girl groups, and torch balladry were absorbed into her singular, yet consistently accessible style. The trappings changed over time, and the music grew more elaborate and orchestral, but Hardy was her own person from the very start, secure in her identity.