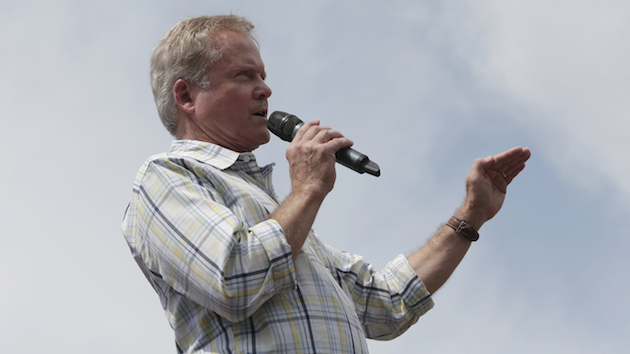 The announcement for his press conference said that Webb was considering running as independent. He didn’t explicitly commit to such a run on Tuesday, saying only that he would spend the coming weeks trying to assess potential support. “I am not going away. I am thinking through all of my options,” he told reporters at the National Press Club. But he insisted that he’d not only be able to raise more money and earn more support as an independent, but that he could beat current front-runners Donald Trump and Hillary Clinton. “If we ran an independent race that worked and got traction, I honestly could see us beating both of them,” he said. Craig Crawford, Webb’s spokesman, told CNN that he expects Webb to make a decision on whether he’ll make an independent bid for the presidency “by the holidays.”

Webb, a former Republican, served in the Senate as a Democrat, but leaving the Democratic race seemed to come mostly as a relief. “That party is filled with millions of dedicated, hard-working Americans. But its hierarchy is not comfortable with many of the policies that I have laid forth and, frankly, I am not comfortable with many of theirs,” he said. Webb’s positions on affirmative action, gun control, the environment, and other issues are strongly at odds with the Democratic mainstream, though he took care to highlight how he often disagrees with Republicans, especially on campaign finance and supporting organized labor. He also complained again about his speaking time at last week’s Democratic debate, saying it was proof that the party was stacking the odds in Clinton’s favor. When asked if he still considered himself a Democrat, he responded with a grim-faced pause. “We’ll think about that,” he eventually said.

He also went on a familiar attack against partisanship, saying, “Americans are disgusted by all this talk of Republicans and Democrats calling each other the enemy instead of reaching across the aisle and finding ways to work together.”

Without the Democratic Party in the way, Webb claimed he would be able to reach out to independents and Republicans who may not have supported him as a Democrat. “I feel much freer now having cleared the air to do that,” he said, predicting that he’d also get “significant financial help” from people willing to contribute to an independent Webb campaign. Webb’s social media team is already fond of retweeting praise from Republican and independent voters, and he said he had also spoken to larger donors and potential bundlers—people who help campaigns solicit contributions—who might back him.

Webb’s appeal sounded in many ways like that of Sen. Bernie Sanders: Americans are tired of politics as usual, and it will take a populist groundswell to truly shake things up. But after months of low poll numbers, poor fundraising, and a snail’s-pace campaign schedule, he has none of Sanders’ ability to put that message to use. And Tuesday’s press conference seemed to offer no assurances that an independent run would be much different.