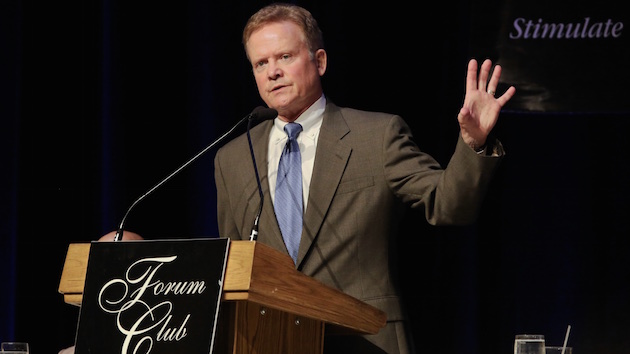 At long last, former Virginia Sen. Jim Webb (D) is officially a candidate for president. After weeks of supposedly imminent announcements—including ones his staff may not have known about—he declared on Thursday afternoon that he’s running, with a long statement on his website that blended a prudent hawkishness with economic populism. ” I understand the odds,” Webb notes, “particularly in today’s political climate where fair debate is so often drowned out by huge sums of money. I know that more than one candidate in this process intends to raise at least a billion dollars—some estimates run as high as two billion dollars—in direct and indirect financial support…We need to shake the hold of these shadow elites on our political process.”

Webb, as he concedes, is a huge underdog, polling at just 2 percent in nationwide polls. Here’s what you should know about the latest Democratic contender.

He hasn’t been a Democrat for all that long: Webb switched parties to challenge Republican Sen. George Allen in Virginia in 2006. Before that, he was a Republican, and an assistant secretary of defense and then secretary of the Navy in the Reagan administration. He’s still apparently some conservatives’ favorite Democrat.

He’s a defender of working-class white votes: Webb, whose family comes from rural Appalachia, believes Democrats “have kind of unwittingly used this group, white working males, as a whipping post for a lot of their policies,” as he told Yahoo in January. He has backed the coal industry, supports gun rights, wants to sharply limit affirmative action, and talks about focusing on economic opportunity and moving past race in America—though that hasn’t worked out for him lately.

He has taken some surprisingly liberal stances: One of Webb’s longstanding interests is criminal justice reform, which he unsuccessfully pushed during his single Senate term. Just last month, he told the annual National Sheriffs’ Association conference that cops shouldn’t be “heavied up” with military gear. He routinely slams the Citizens United decision and was an early, loud opponent of the war in Iraq.

He was possibly the leading advocate for veterans as a senator: The Montgomery GI Bill, which sent millions of veterans to college on the government’s dime, was an antiquated mess when Webb joined the Senate in 2007. The Marine veteran pushed through the updated Post-9/11 GI Bill, which boosted payments to keep up with skyrocketing college tuition.

His books keep getting him into trouble: In 2006, Republican Sen. George Allen dredged up sex scenes from Webb’s novels and passed them around during the last days of their Senate race, trying to paint Webb as a smut peddler. Webb won the election anyway. This year, it’s been Webb’s nonfiction in the spotlight. Passages from Born Fighting, his 2004 history of Scots-Irish immigrants to the United States, in which Webb defended Confederate soldiers and blasted the “Nazification of the Confederacy,” recently filled the news while he was ignoring questions about the Confederate flag controversy in South Carolina. Webb eventually responded with a Facebook post largely repeating his book’s argument that Southerners should be allowed to honor their ancestors who fought for the Confederacy.

There’s a space telescope named after him: Not really.