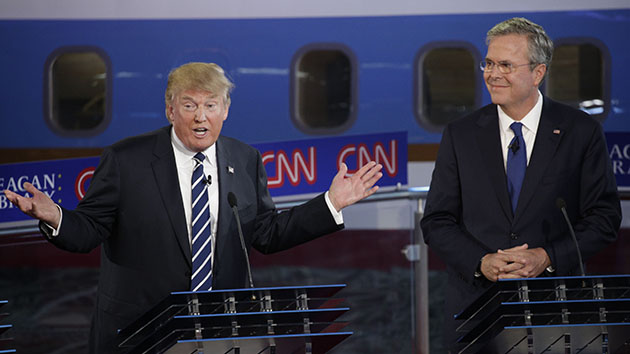 During Wednesday’s GOP presidential debate, Donald Trump—the Republican who’s still running laps around the competition in the polls—faced a seemingly tough question from moderator Jake Tapper: can he really serve as an effective president when he can’t name or even recognize many foreign leaders and groups?

The question stems from Trump’s appearance earlier this month on Hugh Hewitt’s radio show, in which he confused Iran’s Quds Force, a special forces unit within the country’s Revolutionary Guard, with the Kurds in Iraq.

Tapper framed the question around Sen. Marco Rubio’s recent criticism of Trump over the gaffe. “If you don’t know the answer to these questions, then you are not going to be able to serve as commander and chief,” Rubio said earlier this month.

How’d Trump deal with Tapper’s question? After all, confusing and mispronouncing foreign names was a standard criticism that dogged George W. Bush throughout his presidency. But Trump? Nah, he’s not worried. First, he boasted about how Hewitt—a co-moderator of the CNN debate—had since apologized and said that “Donald Trump is maybe the best interview anywhere that he’s ever done.”

“I will say this though,” Trump continued, “Hugh was giving me name after name—Arab name, Arab name, Arab—and there are few people anywhere, ANYWHERE, that would have known those names. I think he was reading them off a sheet.”