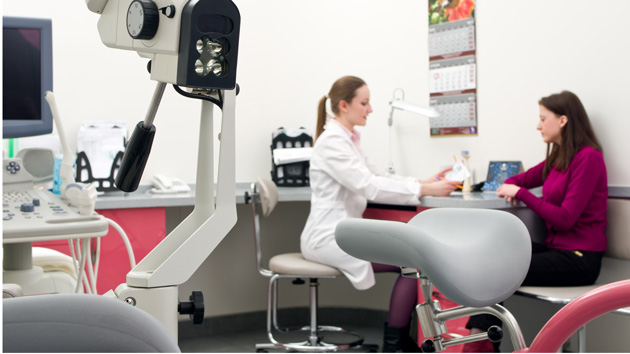 This week, the Congressional controversy over Planned Parenthood could come to a head as investigations continue through the House of Representatives. Today, Cecile Richards, the president of Planned Parenthood Federation of America, will testify before the House Oversight Committee, one of several committees conducting an investigation in the wake of videos from anti-abortion activist David Daleiden, who is also expected to testify in the continuing discussion.

Most of the clinics listed don’t even appear to have a certified OB-GYN on staff.

One of the claims they may address has been neatly presented in a map circulating on social media. The graphic claims that there are 13,540 clinics where women can find comprehensive health care, as opposed to a mere 665 Planned Parenthood locations. It has become a popular talking point in the conservative push to defund Planned Parenthood—most notably mentioned by Jeb Bush in the GOP debate earlier this month. The map in question seems to be referring to a list of clinics, organized by state, from the Centers for Medicare and Medicaid Services, a branch of the Department of Health and Human Services.

But what the graphic doesn’t mention is that most of the clinics listed don’t even appear to have a certified OB-GYN on staff. The clinics are mostly general practice, meaning they may lack equipment and expertise to deliver reproductive health care to women. It’s not clear what criteria the groups circulating the map used to define viable options to replace Planned Parenthood’s services, and the groups did not respond to requests for comment.

While the clinics on this list do accept Medicaid, they are not set up to take the massive influx of patients that would result from a shutdown of Planned Parenthood. What’s more, many private reproductive health care clinics—those that aren’t represented on the list—don’t take Medicaid at all. That’s because the program pays just a fraction of what private insurers will reimburse.

The claim that community clinics could replace Planned Parenthood represents “a fundamental misunderstanding of how the health care system works.”

Mark DeFrancesco, president of the American Congress of Obstetrics and Gynecologists, says it’s common for practitioners not to accept Medicaid patients, because the reimbursement rates can’t come close to offsetting the operating costs of their clinics. “The reimbursement is such that Medicaid just by definition doesn’t pay anywhere near what private insurers pay for OB-GYN visits,” says DeFrancesco.

Sara Rosenbaum, a health law professor at George Washington University, agrees. In a blog post for Health Affairs, she writes that the claim that community clinics could replace Planned Parenthood represents “a fundamental misunderstanding of how the health care system works.”

Additionally, the Congressional Budget Office estimated in a report issued earlier this month that if Planned Parenthood were defunded, as many as 650,000 women “in areas without access to other health care clinics or medical practitioners who serve low-income populations” would lose their reproductive health care. And a survey by the Guttmacher Institute found that women often value specialized family planning clinics such as Planned Parenthood over primary care clinics for reasons such as affordability, increased confidentiality, and a greater range of contraceptive options. Guttmacher also reports that in 103 counties, Planned Parenthood is the only “safety net” family planning service, meaning that a large portion of their patients are either uninsured or reliant on Medicaid.

If Planned Parenthood were to lose a third of its entire budget, DeFrancesco warns, “these patients won’t have anywhere else to go.”