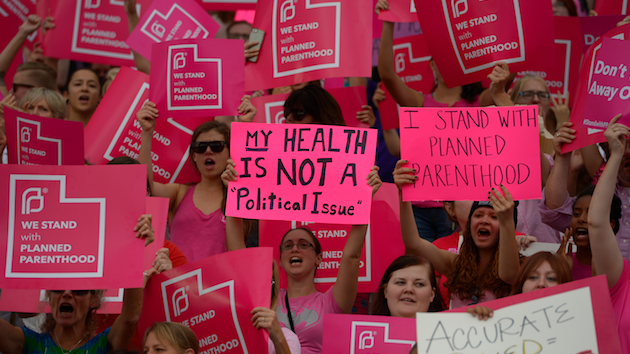 Planned Parenthood supporters rallied in Utah in August as the state government moved to defund the group.Leah Hogsten/AP

The House on Friday voted 241-to-187 to strip Planned Parenthood of some $500 million in federal family planning funds for a year. The move is intended to keep the public eye on allegations of illegal behavior by Planned Parenthood staffers but remove the possibility of a government shutdown by conservatives bent on defunding the organization.

The vote followed several grueling hearings held by the House Judiciary Committee into the undercover sting videos that allegedly show Planned Parenthood employees selling fetal parts, which would be a violation of federal law. The organization has denied the allegations, and state after state investigating the videos, which are heavily edited, has been found no evidence of wrongdoing. As the October 1 deadline for funding the government approaches, however, several conservative members of Congress, including presidential hopeful Sen. Ted Cruz (R-Texas), threatened to block any government funding bill that provided Medicaid or family planning dollars to Planned Parenthood. But it remains to be seen if this latest vote will satisfy conservative elements of the party.

Planned Parenthood is barred by law from using federal funds to provide abortions. The $500 million or so it receives each year from the government allows the group to provide family planning and other reproductive health services to mostly poor women on Medicaid. Ahead of the vote, conservative activists and lawmakers circulated a list of thousands of other family planning providers that could replace Planned Parenthood for the thousands of poor women who use its services. There is ample evidence to suggest that these alternatives to Planned Parenthood do not have the capacity to treat the group’s patients.

The bill now goes to the GOP-held Senate, where it almost certainly faces a filibuster by Democrats in the minority.