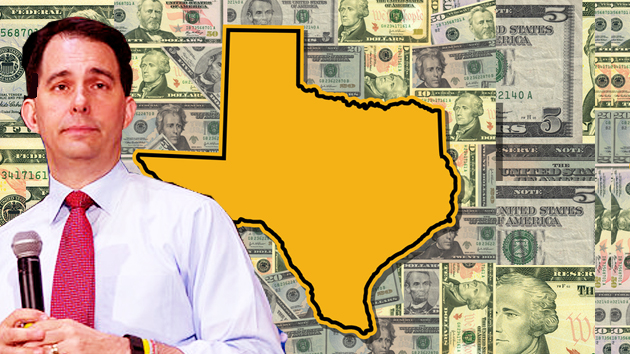 Before most GOP presidential contenders set foot in Iowa or New Hampshire, they typically first hit another pivotal state: Texas. The Lonestar State is the undisputed center of the Republican Party’s donor base, so almost all of the GOP hopefuls have trekked regularly there and established extensive fundraising operations in Texas. But there’s one big exception: Scott Walker, who formally announced his presidential bid on Monday.

The union-busting Wisconsin governor may be a conservative darling, but he’s way behind the curve when it comes to courting Texas’ biggest money men. Bill Miller, a top Texas lobbyist who regularly advises megadonors on their contributions, says he’s heard almost no buzz from the donor class about Walker. In the past, Miller has worked with major political benefactors including the late Bob Perry, a Texas home builder who gave more than $70 million to conservative causes over the years and was the major funder behind the 2004 Swiftboat Veterans for Truth group. This year Miller says he’s talked to clients about many of the Republican candidates, but not Walker.

“No one is asking about him,” Miller says. “None of our clients. We have a huge client base. It’s oddly quiet for a guy that’s supposedly top three among the potential nominees.”

Walker has previously received backing from the Koch brothers, and is said to be among the top contenders for support from their extensive donor network during this election cycle. But, if he’s unable to make inroads in Texas’ donor world, it could hurt his chances at the presidency—if only because his most formidable opponents will have the state’s deep reserve of money behind them.

According to the nonpartisan Center for Responsive Politics (disclosure: I used to work there), Texas regularly ranks among the top states in terms of contributions to political candidates and committees. In every presidential election going back to 2000, it places first among states that give predominantly to Republicans. In 2012, for instance, Texas accounted for $347.2 million in political donations, second only to California overall, and 73 percent of those contributions went to Republican candidates or super PACs.

According to Miller, almost all of the top-tier candidates—including Jeb Bush, Marco Rubio, and Rand Paul—have come knocking on the doors of Texas donors. But Walker has not had much of a presence in the state.

“Among all those guys who are acknowledged at the top, he’s the one guy who is nowhere. Even Chris Christie has had more resonance here,” Miller says.

Campaign filings for Rubio and Paul show that they have been fundraising for months, or years, in Texas. Bush has made well-documented fundraising expeditions to the state, with the assistance of his brother and other long-time family friends. Ted Cruz hails from Texas and has a well-established donor base there. Walker appears to have had one public trip to Texas, during which he attended a fundraiser at the home of Harlan Crow, a Dallas billionaire.

Walker campaign aides say he has been to Austin, Houston, and San Antonio as well, and the response has been “enthusiastic.” Future trips to Texas are planned, they say. But if there’s an on-the-ground fundraising operation for Walker, Miller isn’t the only one who has missed it.

“I don’t see any of my network moving towards him and can’t name anybody who’s with Scott Walker. I think he’s behind the curve. Most of the financial leadership you’d want to see is committed, the bundler types.”

“Scott Walker has no visible organization in my part of the state. He really doesn’t come up,” says Gaylord Hughey, a lawyer who’s known as the “don of East Texas” by Republican operatives. Hughey has worked as a bundler for the campaigns of George W. Bush and John McCain, and he’s currently signed up to raise money for Jeb Bush. “Among the sort of really hard R Republicans, Scott Walker is probably big,” he notes, “but to the business donor group, he has not really resonated.”

That might spell trouble for Walker, because Hughey says Texas’ major bundlers have already been locked up by his rivals.

“I don’t see any of my network moving towards him and can’t name anybody who’s with Scott Walker,” Hughey says, ticking off the names of bundlers for other candidates. “I think he’s behind the curve. Most of the financial leadership you’d want to see is committed, the bundler types.”

Walker’s campaign and supporters have stressed that he plans to pursue a Midwest-based campaign that relies on a “new generation of bundlers,” according to CNN. “Our donor is not the tried and true Republican donor in New York City that’s given to everybody since Reagan,” Walker fundraiser Anthony Scaramucci, the founder of investment firm SkyBridge Capital, told the network. “We don’t have the mercenary donor that’s paying for past political favors.”

Politico reported that two big Chicago-based donors—Joe Ricketts, the former chairman of TD Ameritrade and Ken Griffin, a Chicago hedge fund manager—have signed on with Walker. While both were major donors to outside spending groups in 2012 (Ricketts gave $13 million to super PACs in 2012 and Griffin contributed about $2.5 million), they still only qualify as second-tier donors behind some of the legends of the Texas donor world. Miller’s onetime client Bob Perry gave $23.9 million in 2012; Harold Simmons, a billionaire chemical magnate, gave $26.8 million. Both Simmons and Perry died in 2013, but the state has a wealth of other big donors who can be relied on to cut seven-figure checks. Included on the list of big Lone Star donors are Republican backers such as Robert McNair, the owner of the Houston Texans football team; the Hunt family, who are royalty in the oil world; and Robert Rowling, whose investment firm owns Golds Gym and Omni Hotels.

“In these cities, there’s just people who you hit on, and they’re pretty much like a slot machine and they deliver—you get them with three sevens and you get a pile of cash,” Miller says, laughing. “That’s why Texas is good, it does deliver and it does deliver with regularity, with large sums.”

To hit the jackpot, Walker has to show up, though. Jennifer Hall, the chairman of the Tarrant County GOP, says Walker has not yet visited her territory, the third-largest county in the state, located just outside of Dallas. When he does, she expects the activist base to be excited. “In talking to the activists, they’re very interested in Scott Walker,” she says. “But the donor world is very different from the grassroots world.”

Hall pointed out that the Texas GOP primary is early this election cycle—March 1, 2016, just three weeks after the New Hampshire primary—so it’s more than just donors that matter. But, as Miller notes, at this stage in the race it’s the money that counts if you want your campaign to even make it to the Texas primary.

“I think he’s got some appeal to the grassroots. He’s busted the backs of Democrats, and believe me, the activist base salivates over that kind of action,” Miller says. “Now the donor base is a little different animal. Well, that’s the game that’s being played right now.”