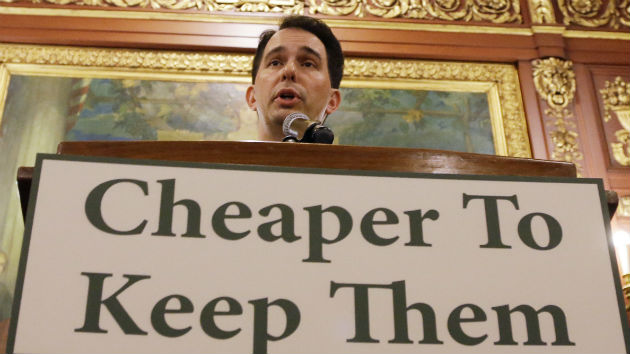 The Koch brothers and their political machine have long been key allies of Wisconsin governor and presumptive 2016 hopeful Scott Walker. With the GOP presidential field getting more crowded by the day and political observers wondering who will win the Koch Primary—and the financial backing of these billionaires and their donor network—Walker has sparked a controversy in his home state in which and he and Team Koch are on opposite sides.

When Walker announced a plan last week to spend $250 million in taxpayer money for a proposed $500 million basketball arena in downtown Milwaukee, the local chapter of the Koch-founded advocacy group Americans for Prosperity joined the chorus of detractors who condemned the project. The National Basketball Association is demanding the new venue and is threatening that the Milwaukee Bucks franchise may have to move if the arena isn’t built by 2017. This has put Walker in a tough spot. The failure to retain the team would be an ugly black eye for Walker, but the plan to spend taxpayer funds propping up a highly lucrative private business is irritating Wisconsin Republicans and Democrats alike.

While Walker’s forays into union-busting had strong conservative backing, the political dynamics involved in the public financing of sports arenas and stadiums are much different. Across the nation in recent years, conservatives and progressive groups and activists have questioned the notion that financing arenas for sports franchises with taxpayer funds will spur the local economy. And Walker is feeling the backlash.

Wisconsin Democrats predictably oppose Walker’s plan, but few of his fellow Republicans are rushing to join him in standing with the NBA. At the moment, 12 of 19 GOP state senators are against the idea. In the state’s lower chamber, Walker’s not faring much better. State representative David Murphy (R), who recently called Walker’s plan to slash $300 million from the state university system “a bold vision for the future,” declared, “I’m not a believer in government supporting sports arenas for millionaire players and billionaire owners.”

Perhaps most mortifying for Walker is that the plan is being publicly panned by the Wisconsin chapter of Americans for Prosperity. It was AFP that came to Walker’s aid when his anti-union legislation sparked massive rallies and protests in 2011 and again when Walker came close to being ousted from office in a recall effort. But Wisconsin’s AFP chapter is vociferously dumping on the stadium deal.

“The current deal is based on fuzzy math, complicated accounting and millions of taxpayer dollars,” AFP state director David Fladeboe said last week. “This proposal needs to be rejected and the people of Wisconsin need to be protected.”

“This proposal needs to be rejected and the people of Wisconsin need to be protected,” said AFP’s state director last week.

The fuzzy math Fladeboe is referring to comes from Walker’s sales pitch for the arena proposal, which has the less-than-catchy tagline: “Cheaper to Keep Them.”

Walker contends that if the Bucks leave, the state will miss out on millions in tax revenue, not the least of which will come from the wealthy athletes who play at the new arena. And, Walker has argued, if the arena isn’t built, the lot it’s slated to be constructed on will never generate as much economic activity as a basketball arena would bring.

Critics of the proposal say that Walker’s numbers, specifically the $250 million price tag, seem understated. One estimate is that the real price, when the long-term interest costs are factored in, will be at least $320 million. Another estimate pegs the cost at $400 million. Either way, the cost is greater than the savings of $300 million that are supposed to come from Walker’s proposed cuts in the University of Wisconsin system for the next two years.

Walker’s plan may be a very public air ball if he doesn’t find a way to devote serious time and political capital to selling the project. That may be difficult, since Walker’s focus increasingly seems to be on his possible presidential bid. He is already spending a significant amount of time out-of-state in places such as Iowa—trips that are irritating some allies—and his attention will only grow more divided if he launches a presidential campaign.

If the state Senate does not approve the inclusion of Walker’s arena project in the state’s annual budget by the end of June, the debate will drag on until the fall—prime campaigning time for Iowa’s bellwether caucus. At that point, in order to avoid the loss of one of the state’s three professional sports teams, Walker may have to shift his focus away from the campaign trail to manage a contentious budget fight that his staunchest allies have abandoned him on.