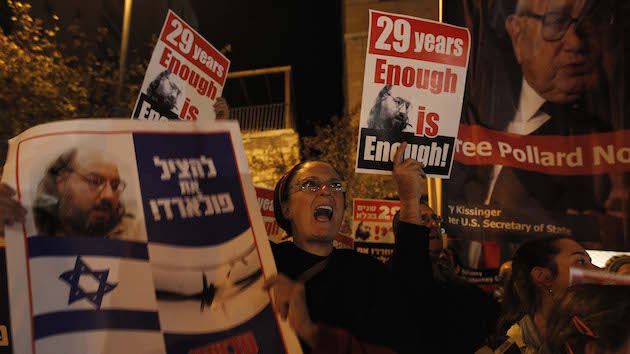 Israelis protesting for the release of American Jonathan Pollard, who spied for Israel and was convicted to life in prison in 1985.Muammar Awad/Xinhua/ZUMA Wire

Much of the debate surrounding the nuclear deal with Iran announced last week has centered around Israel’s reaction—and what the United States might offer the Israeli government to tamp down its anger over the agreement. It turns out one of those things may be the freedom of convicted Israeli spy Jonathan Pollard.

Pollard, once a US Navy intelligence analyst, was convicted of espionage in 1985 and sentenced to life in prison. His release became a cause célèbre for many Israelis, and the country’s leaders have campaigned for years to have Pollard released. They have been unsuccessful up until now, but the Wall Street Journal reported on Friday afternoon that the US will soon allow Pollard to go free.

Israel has been the leading international critic of the Iran deal—Prime Minister Benjamin Netanyahu called it a “stunning historic mistake” within hours of its completion—and the timing of the report gives the impression that Pollard’s release would be an olive branch to the Jewish state. But, as the Journal reports, “[s]ome U.S. officials strongly denied Friday there was any link between the Iran deal and Mr. Pollard’s prospective release, saying that any release decision would be made by the U.S. Parole Commission.” Pollard has also been a bargaining chip in previous US-Israeli diplomatic spats, most recently last year as the Obama administration sought concessions from Israel in order to salvage peace talks with the Palestinian Authority.

Pollard is approaching the 30-year mark of his life sentence, and is eligible for parole for the first time on November 21, 2015.