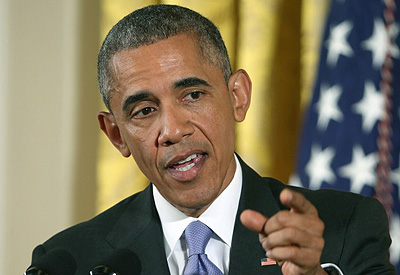 Why is President Obama talking so much about the Iran nuclear deal? It’s not as if he’s likely to convince many Republicans to support it, after all. Jonathan Bernstein says the answer lies in the unusual way Congress is being forced to vote on the deal: the agreement takes effect unless Congress votes to disapprove it. Obama can veto any resolution of disapproval, and it only takes one-third of Congress to sustain that veto. In other words, all Obama needs are Democratic votes. And the best way to get those votes is to take advantage of the power of polarization:

By speaking out in favor of something, and doing it repeatedly, presidents tend to polarize public opinion along party lines. If he needed bipartisan support, the best strategy would be to keep his mouth shut.

But Obama doesn’t need any Republican help. He just needs Democrats to stick together, and not base their votes on interest-group attachments or, for that matter, on their personal views.

While Obama thinks the Iran agreement should win on its actual merits — otherwise he wouldn’t have agreed to it! — not everyone sees it the same way. He can try to give swing voters in the House and Senate substantive reasons to support it. But this wouldn’t be as efficient as simply getting the Democrats to act as partisans.

Republicans are cooperating beautifully, aren’t they? Obama must be very pleased.