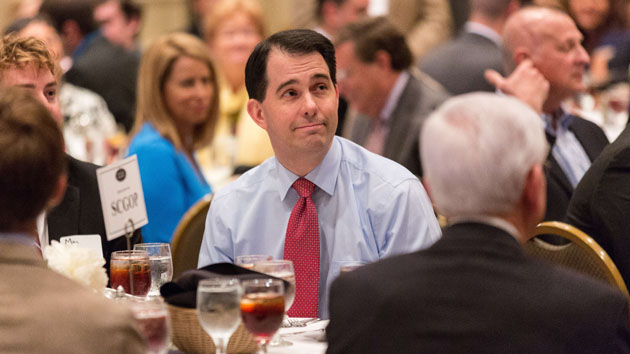 Charles and David Koch have already made it clear that they plan to do everything in their power to prevent Hillary Clinton (or, in case she stumbles, any other Democrat) from winning the presidency. The moguls hope to garner $889 million for the 2016 election from their networks, much of it bound to be channeled through their favorite Dark Money organizations. At one single summit in late January they managed to raise $249 million from friends and allies.

And now, it looks like the Koch brothers may have landed on their standardbearer for all that spending. As the New York Times reported:

On Monday, at a fund-raising event in Manhattan for the New York State Republican Party, David Koch told donors that he and his brother, who oversee one of the biggest private political organizations in the country, believed that Mr. Walker would be the Republican nominee.

“When the primaries are over and Scott Walker gets the nomination,” Mr. Koch told the crowd, the billionaire brothers would support him, according to a spokeswoman. The remark drew laughter and applause from the audience of fellow donors and Republican activists, who had come to hear Mr. Walker speak earlier at the event, held at the Union League Club.

If the Kochs do decide to back Scott Walker, according to the Times, the money would come from them personally, rather than their network of affiliated groups. But with a combined net worth of over $85 billion, Charles and David could set up a vehicle that would outspend nearly anyone while barely tapping into their bank accounts. Seeing the brothers get behind Walker isn’t terribly surprising. The pair invested heavily in his initial gubernatorial campaign and have aided him in his subsequent elections.

Not so fast, though, Politico‘s Mike Allen cautioned this morning. Despite David Koch’s remarks, he provided Politico a statement disavowing any endorsement. As Allen wrote, the brothers say they are undecided and still plan to hold “auditions” at their summer donor conference. In addition to Walker, the lineup of people under consideration reportedly includes Marco Rubio, Rand Paul, Ted Cruz, and, most surprisingly, Jeb Bush.

Whoever ends up gaining the Kochs’ support would have unparalleled fundraising might, and would have to be considered a favorite for the Republican nomination. And their ascent would be the latest example of the power of the ultrarich in the age of the super PAC: Winning broad support from small donors doesn’t matter when the affections of two individuals willing to spend astronomically could upend the entire campaign.