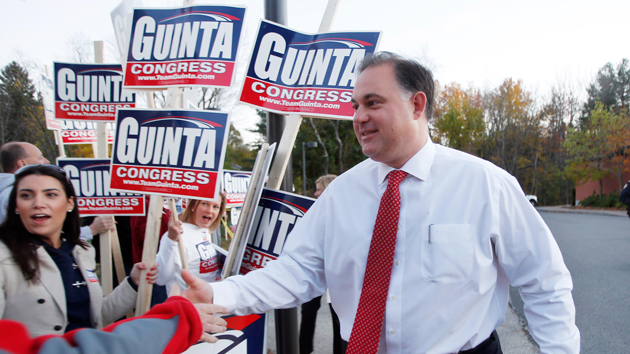 As the sole GOP congressman from New Hampshire, Rep. Frank Guinta should be having plenty of fun in the run-up to the state’s bellwether primary. Ordinarily, Republican presidential hopefuls would be lining up to woo him for his endorsement and begging him to host events to introduce them to New Hampshire voters. Instead, he has quickly become one of the state’s least popular Republicans, due to a campaign finance scandal that threatens to derail Guinta’s political career.

The other Republican in New Hampshire’s congressional delegation, Sen. Kelly Ayotte, has called on Guinta to resign. Meanwhile, the publisher of the famously conservative New Hampshire Union Leader, who has steadfastly supported Guinta’s political career since his days as mayor of Manchester, recently signed his name to a brutal six-word editorial about Guinta: “Frank Guinta is a damned liar.”

The controversy stems from the news that Guinta reached an agreement with the Federal Election Commission in which he acknowledged that when he sank $355,000 of personal funds into his first congressional run in 2010, it wasn’t actually his money. It was his parent’s money. A federal candidate can spend an unlimited amount of his or her own money on their races. Guinta’s campaign agreed to repay the funds in full and pay a $15,000 fine. As far as the FEC is concerned, the issue is settled. So why is Guinta catching so much flak from his own party over a campaign violation that occurred almost six years ago?

Because he lied about it repeatedly.

And not just to FEC investigators—but also to fellow Republicans. Powerful Republicans. Since the FEC complaint was first filed against him five years ago, Guinta has consistently and unambiguously insisted that he did nothing wrong. Along the way, he convinced many prominent Republicans—including House Speaker John Boehner, who recently used his political action committees to donate $14,000 to Guinta’s campaign—to go to bat for him. Not only did he risk his own credibility, he risked theirs as well.

“What else is he lying to people about?” asks former New Hampshire GOP chair Fergus Cullen. “I look at him and if he says the Red Sox won the game last night, I want to check the box score.”

Guinta told the FEC that he had personally given his own campaign $110,000 and loaned it another $245,000. But because these funds actually came from his parents, this was an illegal contribution. Though the FEC’s case is done with Guinta, he could face a criminal investigation if it is determined that while trying to claim his parent’s money as his own he failed to pay proper taxes or misled investigators.

Fergus Cullen, a former chairman of the New Hampshire GOP, says he first spotted the problem back in the summer of 2010 when he noticed that Guinta had suddenly amended his personal financial disclosure to include a bank account valued between $250,000 and $500,000. His previous disclosures, as a House member and as the mayor of Manchester, had not included such significant assets.

“He had already loaned himself more money than he had ever shown having in assets,” Cullen says.

It also seemed to Cullen and others in New Hampshire that it would be unlikely Guinta would have that much money at all. After college, he worked as a staffer for then-Rep. Jeb Bradley (R-N.H.) and earned a graduate degree in intellectual property (accruing tens of thousands of dollars in student loans, which he still is repaying) before becoming mayor, a job that paid about $72,000 a year.

“Frank was well known in the community and people were asking, ‘Where’s this money coming from?'” Cullen says.

Guinta’s office did not return a request for comment, but according to Cullen, the lies started the night in July 2010 that Cullen discovered that Guinta had amended his financial disclosure report. In his role as an occasional Union Leader columnist, Cullen interviewed Guinta about where the money came from. According to Cullen, Guinta told him that he had saved the money through hard work and frugal savings and he said his previous failures to disclose this large bank account was “an inadvertent oversight.”

“It was clear to me immediately that he was bullshitting,” Cullen recalls.

But that was the story that Guinta stuck to. Not only did he continue to insist for years—to media outlets, politicians, voters, and the FEC— that he had earned the $355,000 he dumped into his campaign, he went on the offensive. Guinta won his race in 2010, defeating incumbent Democrat Carol Shea-Porter, who won her seat back in 2012. In 2014, Guinta challenged Shea-Porter and actually ran attack ad against her on this issue. “Carol Shea-Porter is lying about Frank Guinta’s finances,” the ad declared. “The House Ethics Committee 100 percent cleared Frank Guinta. He’s in ‘full compliance.'”

Never mind that the House Ethics Committee is not the Federal Election Commission and that it might not have investigated him in the first place. The ad conveniently failed to mention that Guinta was still under investigation by the FEC.

When Shea-Porter pushed him in a debate on whether the FEC was investigating him, he dismissed her and derided FEC investigations as Democratic dirty-trickery.

“The FEC has thousands of complaints because this has become a strategy by Democrats across the country to file complaints against Republicans,” Guinta said. “What I really think is that people want to get back to substantive public policy issues, but I decided to put the ad up because you’re lying about my record and I think people in New Hampshire ought to know the truth.”

The issue died down until a few weeks ago, when the FEC announced it had reached a settlement with Guinta, in which he acknowledged that he had banked an illegal contribution. Still, Guinta has continued to insist he had done nothing wrong, despite literally agreeing with the FEC that he had. He claimed the money came from a “family pot” to which he and his siblings each have access.

This week, the FEC released the full results of its investigation, obliterating his alibi.

“Christine Guinta Raymond, Rep. Guinta’s sister, represented that she was unaware such a family pot existed, let alone that she or either of her brothers enjoyed a legal or equitable right to access those funds,” the FEC’s investigator noted in a summary of his findings.

And Guinta’s mother gave him the money in the form of checks that she wrote “loan” on.

Cullen says Giunta’s reputation is shot and it will drive 2016 GOP candidates away: “What else is he lying to people about? I look at him and if he says the Red Sox won the game last night, I want to check the box score. He’s just been so deceitful.”

Following the news that Guinta had settled with the FEC, Bush was not so kind. “Governor Bush does not believe Congressman Guinta’s actions were appropriate. It is incumbent on public servants to be transparent and ethical,” a spokeswoman said in a statement.

Guinta has, so far, refused to resign, and in Washington GOP leaders have tried to avoid the subject. On Thursday, Speaker of the House John Boehner (R-Ohio) told reporters he is waiting to see “all the facts” before reaching any conclusions. But the New Hampshire GOP chairman sent a letter to the group’s executive committee saying that Guinta’s “credibility has been irreparably damaged.”

Whether Guinta gets to keep his federal job, he has certainly lost his role as a kingmaker in the Granite State.