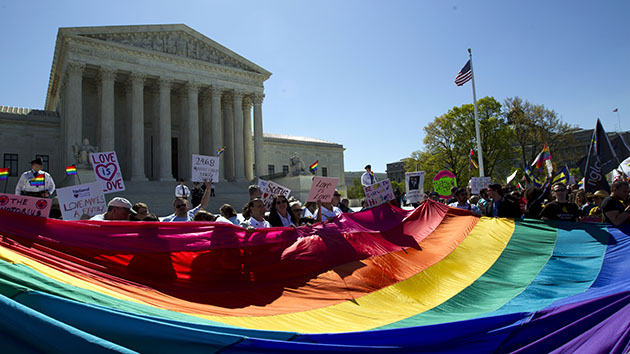 As oral arguments in the highly anticipated gay-marriage case Obergefell v. Hodges got underway on Tuesday morning, hundreds of same-sex-marriage supporters gathered outside the Supreme Court to celebrate what they were convinced would be a major victory. A few dozen gay-marriage foes showed up as well, including members of the notorious Westboro Baptist Church, but even they seemed resigned to the fact that their pro-marriage-equality opponents would prevail.

In Obergefell v. Hodges, the Supreme Court is considering the legality of same-sex-marriage bans; the case turns on the question of whether the 14th Amendment guarantees the right to same-sex marriage and whether states are required to recognize same-sex unions from other states. After the oral arguments, the New York Times reported that the justices were closely divided on whether same-sex marriage is a constitutional right. A decision is expected at the end of June. 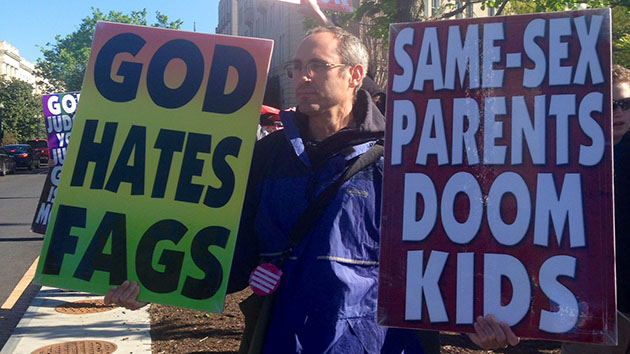 “I know it’s a fait accompli,” said an unhappy-looking Ben Phelps, 39, a member of the Westboro Baptist Church, the Kansas-based group known for its anti-gay activism and categorized as a hate group by the Southern Poverty Law Center. Phelps and a small group from his church were protesting on the outskirts of the rally. He held two signs, one that read “God Hates Fags” and the other “Same-Sex Parents Doom Kids.” Phelps predicted the court will rule in favor of same-sex marriage “because we’re in the days of Sodom.” 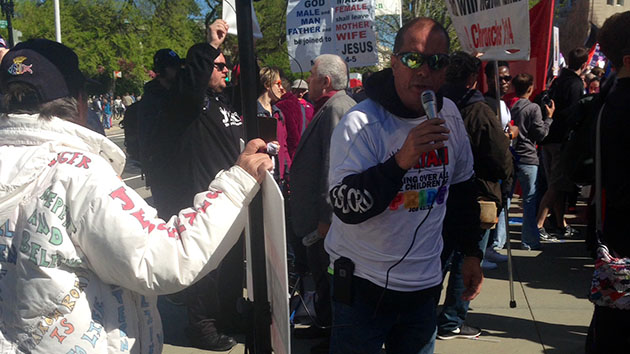 About 30 yards away, David Grisham, the leader of an anti-gay-marriage group called Repent Amarillo (an outfit the Texas Observer described as a “militant evangelical group that advertises itself as ‘the Special Forces of spiritual warfare'”), shouted into a microphone: “Folks, I’m telling you right now, you’re going to lose your rights if you don’t wake up.”

“I believe the Supreme Court will rule in favor of gay marriage,” Grisham told me after passing the mic to another member of his group. The result, he predicted, would be “persecution for Christians.” He added, “The structure of the family will continue to break down” and “society” will unravel with it. 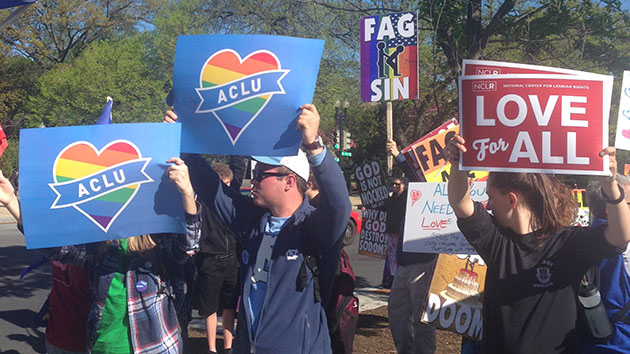 Grisham and Phelps were in the minority. The overwhelming majority of the crowd had gathered at the court to support marriage equality. “I’m confident,” said Maria Mascaro, 34, who drove down from Philadelphia to attend the rally. “There’s going to be a cocktail after this.”

Albino Periera, 50, and his husband, Joe Kowalcheck, 36, as well as their two dogs, Lola and Nero, made the trip to DC by car from Ormond Beach, Florida. “We’re all very optimistic,” Kowalcheck said. “It would be hard to go backward.” 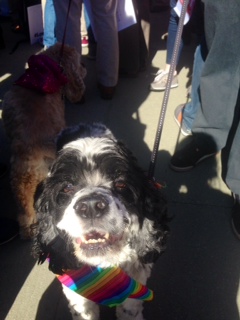 Many supporters were optimistic that Justice Anthony Kennedy, who authored the 2013 opinion striking down part of the Defense of Marriage Act, would be the swing vote in favor of marriage equality. “Public opinion is so in favor” of same-sex marriage, said Barbara Stussman, 48, of Maryland, whose daughter is a lesbian. “I think [Justice] Kennedy takes that into account.” During oral arguments, however, Kennedy expressed concern about changing the conception of marriage that “has been with us for millennia,” according to the New York Times.

Opponents of gay marriage likewise see this case as a watershed moment.

“This is the case,” said Grisham of Repent Amarillo. “This is like a Roe v. Wade moment.”