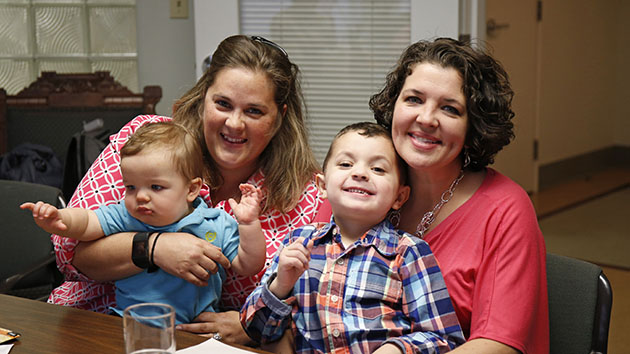 On Tuesday, the Supreme Court will hear oral arguments in the case that could legalize same-sex marriage in every state by the end of the court’s term in June. To stop that from happening, supporters of the state-level bans that could be in jeopardy have filed 66 friend-of-the-court briefs, offering a host of social, political, and scientific reasons the court should uphold existing state bans.

These briefs fall into a few categories. The more temperate ones argue that marriage should be decided at the state level—an attempt to sway Justice Anthony Kennedy without disparaging same-sex unions. Others are more dramatic in tone, such as a brief from the Texas Eagle Forum, a conservative group in Texas, that predicts legalizing same-sex marriage would be “analogous overreaching” to “this Court’s misguided attempt to impose its views on the entire country in Dred Scott,” the 1857 decision often cited as one of the causes of the Civil War.

Opponents have also tried to demonstrate more specific social harms from gay marriage in their briefs. As SCOTUSblog‘s Lyle Denniston noted recently, they don’t want to be caught flat-footed this time around, as they were during the Proposition 8 case over California’s same-sex marriage ban. Asked how same-sex marriages would harm opposite-sex marriages during 2009 pretrial hearing in that case, conservative lawyer Chuck Cooper admitted, “Your Honor, my answer is: I don’t know.”

Referring to the California case, attorney Gene Schaerr, who helped coordinate some of the briefs in support of the gay-marriage bans, told the National Law Journal recently that he “looked back at the amicus briefs” filed in that case. “[O]ur side had not made as powerful a social science case for the traditional definition of marriage as could be made,” said Schaerr, formerly of Winston & Strawn, who defended Utah’s gay marriage ban last year.*

This time around, Schaerr and his allies want to avoid that mistake. Here are a few of the scientific reasons submitted to the Supreme Court from the opponents of same-sex marriage:

Same-sex marriage will cause an additional 900,000 abortions: As Schaerr, the chief author of this amicus brief, admits, “abortion and same-sex marriage may seem unrelated.” But, he has found a connection. Schaerr, writing on behalf of “100 scholars of marriage,” argues that states with same-sex marriage have seen a decline in opposite-sex marriage by “[at] least five percent.” Schaerr extrapolates this 5 percent figure, concluding that over the next 30-year “fertility cycle,” nearly 1.3 million women will forego marriage. Arguing that unmarried women are more likely to get abortions, Schaerr calculates an additional 900,000 abortions. But, he acknowledged to the Washington Post last week, “it is still too new to do a rigorous causation analysis using statistical methods.”

The “homosexual experience” leads to “early death”: This is the argument put forward by Mike Huckabee Policy Solutions, an advocacy group that supports the “national policy aims” of the former Arkansas governor and likely 2016 presidential candidate, and the Family Research Institute, the “anti-gay movement’s main source for…completely discredited junk science” on LGBT people, according to the Southern Poverty Law Center.  Their brief argues that “consistent evidence indicates that individuals who engage in homosexuality experience significantly higher mortality rates than those who do not.”

Children of same-sex marriages are disadvantaged: The Ruth Institute, a San Diego-based group that appears to be run by one woman, Jennifer Roback Morse, and seeks to address “the lies of the Sexual Revolution,” argues that the “‘consensus’ that ‘the kids are ok’ has been manufactured by systematically excluding evidence” that they are not okay. The group is particularly worried about children not having a biological connection to both parents and predicts “social chaos, by creating a world in which families are determined by policy, rather than biology.”

Same-sex marriage will hurt underprivileged women and children: A group that describes itself as “scholars of the effects that marriage law has on the welfare of women, children, and underprivileged populations,” and including gay marriage foe Maggie Gallagher of the National Organization for Marriage, claim that marriage is particularly helpful to the stability and economic status of poor Americans. But redefining marriage, they argue, would create a new era “where men and women are viewed as interchangeable, nonessential facets of family life; and where the law has cemented marriage as a mere governmental capstone of a loving relationship.” Without marriage’s “historical” focus on procreation and stability, single mothers will end up raising children on their own, hurting their economic outlook.

Correction: An earlier version of this article suggested that Winston & Strawn defended Utah’s ban. It did not.