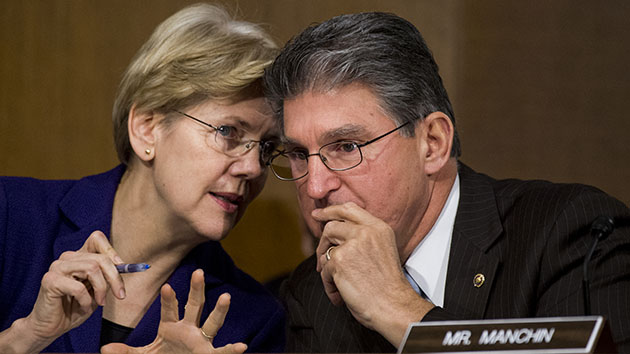 For years, Washington politicians and policymakers have been talking about cutting Social Security benefits. The Beltway consensus, unduly shaped by deficit hawks and Wall Streeters, has been that the system is broken and must be pared back, and progressives who support Social Security have often had to play defense.

But in late March, Sen. Elizabeth Warren, the populist Democrat from Massachusetts, entered the fray—and challenged the prevailing view. In the wee hours of March 27, Warren introduced an amendment to the Senate budget resolution calling for protecting the program’s solvency and expanding Social Security benefits. And every Democrat present but two voted for the amendment; every Republican opposed it.

A budget resolution is a set of nonbinding guidelines for how Congress should write spending bills during the upcoming year. Congress can and often does ignore budget resolutions, but they are a significant statement of priorities and principles, and the amendment process can be an important game of politics. By introducing this amendment, Warren forced senators to take a position on the popular retirement program. “This is how politics is played if you intend to play to win,” says Damon Silvers, policy director and special counsel for the AFL-CIO. “For too long, the progressive or populist part of the Democratic Party has not played to win.”

This wasn’t the first time Warren challenged the notion that Social Security has to be cut. But the support she received from her Democratic colleagues demonstrated how her party has moved on this issue in recent years. When she entered the Senate in January 2013, both Democrats and Republicans were talking about cutting the program. The Obama administration even included a benefits cut in its proposed 2013 budget. But last month was the first time nearly every Democrat went on record to support increasing benefits. “There’s been a shift,” says Nancy Altman, the cofounder of Social Security Works, a group pushing to expand benefits. “The Warren amendment really crystallized it.”

Warren’s recent success was the product of a long progressive campaign that preceded her election. In the past decade, left-of-center policy wonks became increasingly worried about retirement security for Americans. Corporate pension plans—many of which offered decent and secure retirement payments—were going the way of the dinosaurs. In 1980, about 40 percent of private-sector workers received such pension payouts; by 2006, that number had dropped to 15 percent. In general, many retirement plans had shifted to private 401(k) accounts, and these often were woefully inadequate for supporting retirees in a climate of stagnating wages and scant savings. And the recent Wall Street collapse ravaged pensions and personal investments, illustrating that 401(k)s were a shaky foundation for retirement. Progressives and retirement policy wonks began looking for another option. The obvious answer was expanding Social Security.

In March 2012, the AFL-CIO called for “chang[ing] the terms of debate by focusing on the crisis of retirement security.” Over the next year and a half, progressives policy shops and activists answered the call to arms. In April 2013, the New America Foundation, a progressive think tank, published a plan to expand benefits. “Our main purpose in doing that was to move the goal posts,” says Michael Lind, a cofounder of the New America Foundation. Around the same time, two Democratic senators, Tom Harkin of Iowa and Mark Begich of Alaska, introduced bills to expand benefits.

In November 2013, the Washington Post editorial board slammed the expansion push as “liberalism gone awry.” It noted that “even the rich have finite resources; government can only go to that well so many times…Unchecked entitlement spending for the elderly crowds out spending” on young Americans and other priorities. That’s when Warren stepped into the conflict.

The same day, Warren gave a floor speech outlining the looming economic crisis for retirees and lambasting the Post. “The Washington Post framed the choice as more children in poverty versus more seniors in poverty,” Warren said. “The suggestion that we have become a country where those living in poverty fight each other for a handful of crumbs tossed off the tables of the very wealthy is fundamentally wrong.” Warren ended with a call to start “talking about expanding Social Security benefits.”

“That was the beginning of really the media starting to take notice and for the conversation to start to shift,” recalls Altman, the coauthor of a new book, Social Security Works!

Voting to expand Social Security does makes sense politically for Democrats. In August, a poll by the left-leaning Lake Research Partners found that 79 percent of likely voters in 2014 supported increasing Social Security benefits by boosting the amount wealthy Americans pay into the system. This supermajority included 73 percent of Republicans.

“The things that Elizabeth is pushing—and not just in this area but in financial regulation, in student loans, and a whole bunch of areas—are very attractive to working-class communities in middle America,” says Silvers of the AFL-CIO. “The populist wing of the Democratic Party is putting issues on the table that the public supports in a big way. And when that happens it’s very hard for the rest of the party to oppose them.”

It’s not just progressives pushing to expand the program. Last month, Democratic Rep. John Larson of Connecticut, who is not a member of the Progressive Caucus in the House, introduced a bill with 57 cosponsors to expand benefits. When Larson introduced a version of the bill last summer, it had two cosponsors. But perhaps the biggest sign of change is who cosponsored Warren’s amendment: conservative Democrat Joe Manchin of West Virginia. He helped draft the amendment’s language and lobbied his colleagues to support it.

The Warren-Manchin alliance on Social Security is “part and parcel of a kind of subterranean political reality of Washington, which is that the American public is in favor of measures which in Washington are seen as extremist,” says Silvers. Manchin’s home state consistently ranks among the top receivers of federal transfer payments—including, Social Security, Medicare, and food stamps—and its conservative-leaning residents rely heavily on Social Security benefits.

Not everyone believes the budget vote was a big deal. Third Way’s Jim Kessler, who cowrote the 2013 op-ed slamming Warren on Social Security, dismisses the recent budget resolution vote as no more than a nonbinding amendment that was “aspirational” and not a “real plan.” His opinion piece called the idea of increasing Social Security benefits part of a “populist political and economic fantasy.”

There never was any question of Warren and Manchin winning over Republicans on a proposed boost in Social Security. But, Lind notes, the issue will be an important one for Hillary Clinton, the former secretary of state and presumptive presidential candidate. Will she join this Warren crusade? Lind is skeptical that Democrats with close ties to Wall Street, like Clinton, would truly embrace expanding benefits. But progressive Democrats will certainly press Clinton on this Warrenesque point. “I think we do need to expand Social Security, and I think we need to be unabashed about it,” former Maryland Gov. Martin O’Malley said recently. Not coincidentally, he is considering a primary challenge against Clinton.