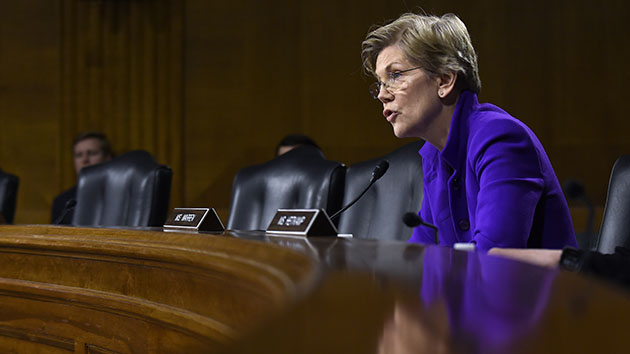 Sen. Elizabeth Warren (D-Mass.) isn’t just a thorn in the side of Wall Street banks. She’s also happy to go head-to-head with the Obama administration when she feels the president’s team is part of the problem.

Right now, the issue fueling a dispute between Warren and the White House is student loan debt. Last week, Warren sent a letter to Education Secretary Arne Duncan alleging that his department is not using many of the tools at its disposal to help Americans who are struggling to pay back student loans. In particular, the department has authority to help students duped by predatory for-profit colleges, and Warren says they’re not using it.

Since her election to the Senate in 2012, Warren has devoted a lot of energy to tackling Americans’ $1.2 trillion in student loan debt. The first bill she introduced upon her arrival in the Senate in 2013 proposed allowing students to obtain loans at the same low rate the Federal Reserve gives to banks. That bill went nowhere, so the following year Warren returned with a second proposal to allow Americans to refinance their student debt at current interest rate levels. Senate Republicans blocked it.

Now Warren is turning to the Department of Education, which, she argues, already has the power to address the problem. The department, which Congress has empowered to administer student loan programs, has broad authority to collect unpaid loans. But in many cases, it also have the authority to reduce or wipe away debts.

In her letter to Duncan, Warren charges that the federal government is projected to earn $110 billion in profits from student loans over the next decade due in part to the department’s “failure to implement congressional directives or utilize its discretionary authority to protect our most vulnerable borrowers.” Warren’s letter was signed by other progressive Democratic senators, including Richard Blumenthal of Connecticut, Tammy Baldwin of Wisconsin, Sherrod Brown of Ohio, Jeff Merkley of Oregon, and Ed Markey, also of Massachusetts.

“[I]t is striking that the Department still intends to generate such significant revenue from federal loan programs designed to help young people get an affordable education,” the lawmakers wrote.

In their letter, the senators explain that under the Higher Education Act, the Department of Education has the authority to cancel federal student loan debts if colleges lied to the borrower or undermined the quality of students’ educations or finances. Many borrowers who attended a for-profit colleges, lured in by misleading job-placement rates, for example, could qualify for loan cancelations under this authority.

The department also has the power to cancel debt for students whose college shuts its doors, Warren and her colleagues note. Warren’s letter highlights the case of Corinthian Colleges Inc, a for-profit college chain that was poised to go belly up last year after evidence it doctored its job placement data resulted in the Department of Education cutting off its access to federal student loan funding. The Consumer Financial Protection Bureau was also suing Corinthian over what it called the company’s “illegal predatory lending scheme.” The lawsuit against Corinthian is still ongoing.

Rather than let Corinthian go under, which would have allowed the department to cancel thousands of students’ federal loans, federal officials orchestrated a deal in which ECMC, a nonprofit student-debt collector that has faced criticism for its aggressive tactics in collecting student debt, took over more than 50 of Corinthian’s campuses. Tens of thousands of Corinthian students’ federal loans remained on the government’s balance sheet.

“I would say that rather than acting in the students’ interests in this circumstance, they’ve really acted as a broker,” Robyn Smith, an attorney at the National Consumer Law Center, an advocacy group, says of the Corinthian deal, noting that the department could ultimately share in the profits if the buyout is successful.

Warren thinks that the Department of Education’s habit of pulling out the stops to keep loans on its balance sheet is counterproductive. In the long run, she’s argued, regularly canceling the debts of students tricked by educational institutions would create an incentive for federal regulators to stop deceptive practices before too many students fall for them—because if they didn’t, the government would take a big hit to its bottom line.

“I think the letter is right on,” says Smith. “What is the whole purpose of the Higher Education Act? Is it to allow the federal government to generate profits while the department turns a blind eye to the deceptive practices?…Or is it to provide equal access and affordable access to education?”

A spokeswoman for the department says it is reviewing Warren’s letter and will respond.