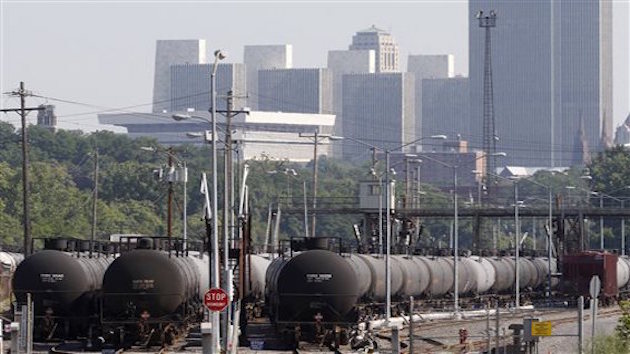 Another day, another oil train derailment. Early Saturday morning, a Canadian National Railway train carrying Alberta crude derailed outside the tiny town of Gogama in northern Ontario. Thirty-eight cars came off the tracks, and five of them splashed into the Mattagami River system. The accident caused a massive fire and leaked oil into waterways used by locals—including a nearby indigenous community—for drinking and fishing. No one was injured, but according to CN Railway’s Twitter feed, fire fighters were still suppressing fires earlier today. People in the area, including members of the Mattagami First Nation, have been complaining of respiratory issues from the smoke.

After the 2013 derailment and explosion of an oil train killed 47 people in Lac-Megantic, Quebec, many pointed to old, unsafe DOT-111 tanker models as a main reason for the disaster and others like it. But at least four of the five recent incidents have involved newer, and theoretically safer, CPC-1232 models.

Environmental and safety advocates say oil-by-rail needs even more stringent safety measures, but they have been slow coming. The US government reportedly balked at creating national standards to limit the amount of potentially explosive gas in tankers carrying oil from North Dakota. And the White House Office of Management and Budget has said it will need until May to finalize rules proposed by the Department of Transportation last summer that would slow down crude-by-rail deliveries and require tankers to have insulated steel shells. The CPC-1232 tankers that derailed in Galena did not have these shells. I asked the Canadian National Railway Company if the tankers involved in Saturday’s derailment had these shells. The company didn’t directly answer that question. In an email, it stated: “The tank cars involved were CPC 1232 tank cars. The exact specifications will be information gathered as part of the ongoing investigation.”

Below are Twitter pictures of Saturday’s derailment in northern Ontario.

Safety concerns rise in the wake of a CN train derailment in northern Ontario http://t.co/r2viEpXo0h pic.twitter.com/hlVp59Hhqv