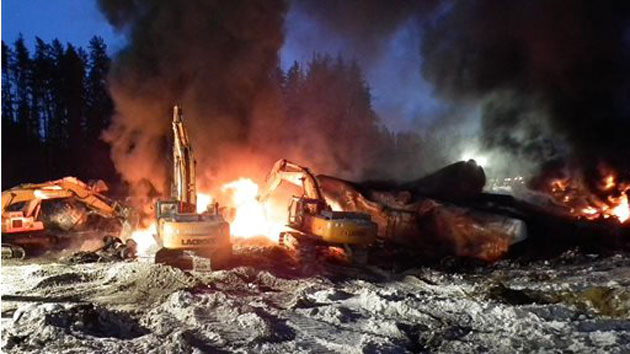 The scene of crude oil train that derailed in Ontario, Canada on February 14. <a href="http://www.apimages.com/metadata/Index/Canada-Oil-Train-Derails/2160129e2f4c44f4b152eeb4ed425d02/6/0"> Transportation Safety Board of Canada</a>/AP

Earlier today, yet another massive train carrying crude oil derailed and caught on fire, this time in northern Illinois near the Mississippi River. One-hundred-and-three of the the train’s 105 cars were carrying crude oil—from where was not immediately clear (Update: BNSF has since confirmed the train was traveling from North Dakota; see below for their response)—eight of which derailed. Two of the derailed cars have caught on fire, according to BNSF Railway which owns the train, sending plumes of smoke and fire into the sky above Galena, Illinois, a town of just over 3,300.

The image of smoldering oil train cars is now a familiar sight: Incidences of exploding oil trains have been rapidly rising in North America thanks to the fracking boom in North Dakota’s Bakken oil fields (Bakken oil is potentially more flammable than normal crude) and the slow transition away from old, unsafe rail cars. Oil-by-rail carloads are up 4000 percent from 2008 in the United States and this is the the third derailment in North America in the last three weeks, including a massive explosion in West Virginia on February 16 that injured one person and spilled oil into the nearby Kanawha River. In fact, a Department of Transportation report predicted trains carrying crude and ethanol would derail an average of 10 times per year in the next two decades. This is bad news for people who live near railways and the ecosystems in which they reside.

People living within a mile radius of today’s derailment have begun evacuating, and authorities are monitoring the Mississippi River for leakage. BNSF Railway has not responded to inquiries from Mother Jones about the age of the trains’ cars and whether the train was carrying Bakken crude. (Update: See below for a response from BNSF). The Birkshire Hathaway subsidiary did tell Reuters, however, that no injuries had been sustained.

Picture from @scandbq of most recent explosion from the @BNSFRailway derailment fire south of Galena pic.twitter.com/KJWoPb2jow

Update 3/6/15 11:30 AM PST: BNSF spokesman Mike Trevino has confirmed to Mother Jones that the train was traveling from North Dakota, and the AP is reporting its tankers were carrying Bakken crude. Trevino said the cars were the CPC-1232 model (newer than the notorious DOT-111 that has raised concern amongst lawmakers), but were nonetheless “unjacketed.” Kristen Boyles, an attorney with environmental advocacy group  Earthjustice, told Mother Jones that “unjacketed” tankers do not have the insulated steel shells that US regulators have proposed mandating for new cars to prevent puncturing after derailment. “This derailment is yet another indication that these trains are not good enough and we’ve got to get federal standards greatly strengthened,” Boyles said. The White House’s Office of Management and Budget says it will finalize the DOT’s proposed rules in May.