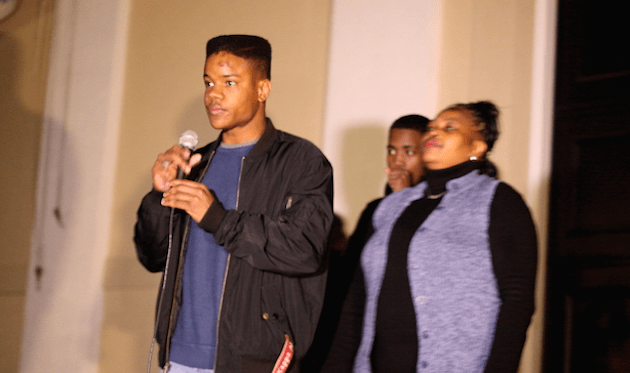 Images and footage capturing the arrest of Martese Johnson, a University of Virginia student who needed 10 stitches after being arrested by state liquor police for allegedly having a fake ID, prompted large protests at UVA’s Charlottesville campus on Wednesday, with hundreds of students gathering to demand justice.

Johnson, 20-years-old and a member of the school’s Honor Committee, was arrested on Tuesday by officers from the Virginia Department of Alcoholic Beverage Control as bystanders recorded the bloody encounter. In one video, Johnson’s head appears covered in blood, and he screams “you fucking racists.” According to Johnson’s lawyer, he was charged with “obstructing justice without force” and public intoxication.

After footage of the arrest emerged online, Virginia Governor Terry McAuliffe launched an investigation into the incident.

“Governor McAuliffe is concerned by the reports of this incident and has asked the Secretary of Public Safety to initiate an independent Virginia State Police investigation into the use of force in this matter,” his office said in a statement.

It is unclear what led to the arrest. A statement from the state’s liquor agents said that “a determination was made by the agents to further detain the individual based on their observations and further questioning.” On Wednesday night, Johnson joined the demonstrators and appeared with a gash wound to the head.

Photos from protest at #UVa in response to #MarteseJohnson‘s injuries from ABC arrest http://t.co/i6XFYmlsz0 pic.twitter.com/rXCJX33Et1

“His head was slammed into the hard pavement with excessive force,” UVA officials said in a released statement. “This was wrong and should not have occurred. In the many years of our medical, professional and leadership roles at the University, we view the nature of this assault as highly unusual and appalling based on the information we have received.”

Absolutely no excuse to justify what’s seen in this photo #JusticeForMartese pic.twitter.com/qesz2st4eZ

As images of both the protest and Johnson’s arrest flooded online with the hashtag #JusticeForMartese, demonstrators chanted “black lives matter” and “shut it down.”