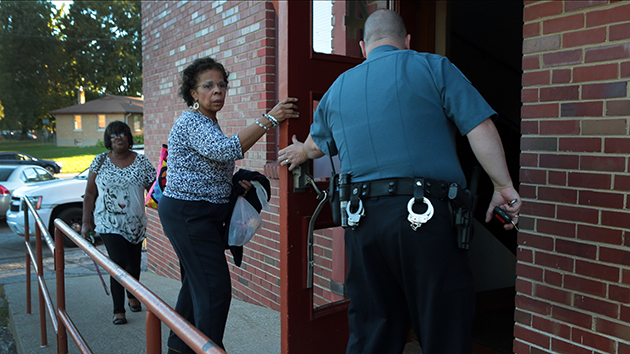 Today the Justice Department released its scathing 105-page report on Ferguson’s pervasive discrimination against black residents. The report included references to blatantly racist emails from local officials: One said Obama wouldn’t last in office because he’s black; another attached a photo of bare-chested group of women, apparently in Africa, captioned “Michelle Obama’s High School Reunion.” The DOJ found plenty of other evidence of racial bias; below are a few examples. (We’re making our way through the report and will add to the list.)

One black Ferguson resident told Justice Department officials about his interaction with a Ferguson police officer, in which the officer told him “N*****, I can find something to lock you up on”:

Ferguson city officials and police interviewed by the DOJ “nearly uniformly” said that it was due to a lack of “personal responsibility,” not the failure of the law, that African-American members of the Ferguson community were disproportionately targeted by law enforcement:

Ferguson police routinely used Tasers “where less force—or no force at all—would do.” Almost 90 percent of the time cops used force, it was against African Americans, and often they used unnecessary force against people with mental health disabilities:

All of the police canine attacks reviewed by the DOJ targeted black residents, including a 14-year-old boy who was hiding in a storage closet. The dog bit his arm, causing puncture wounds:

A white resident who has lived in Ferguson for 48 years told DOJ officials that it felt like Ferguson’s policing and court system is “designed to bring a black man down.” In other interviews, several black residents talked about Ferguson’s “long history of targeting blacks for harassment and degrading treatment”—some talked about changing their commute to work to avoid Ferguson or moving out of the state altogether as a result:

The DOJ called out the following emails sent by Ferguson officials as “illustrative” of racial bias: