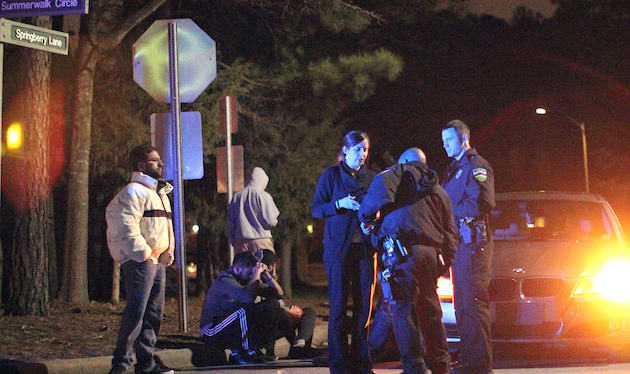 Update, February 11, 2015, 11:24 a.m.: In a statement, police say the shootings may have stemmed from a parking dispute. “Our preliminary investigation indicates that the crime was motivated by an ongoing neighbor dispute over parking. Hicks is cooperating with investigators,” a police spokesman said Wednesday.

A 46-year-old man was arrested for the fatal shootings of three Muslim students inside an apartment complex near the University of North Carolina on Tuesday.

Police say Craig Hicks was charged with three counts of first-degree murder. The victims are Deah Barakat, his wife Yusor Abu-Salha, and her sister Razan Mohammad Abu-Salha. The sisters were reportedly enrolled at North Carolina State University; Barakat was a student at Chapel Hill’s school of dentistry.

This #ChapelHillShooting has cast a shadow over this beautiful city of mine. RIP Deah, Yusor and Razan pic.twitter.com/vM7c9GYaRi

Spencer turned himself into police Tuesday night “without incident,” according to Chatham County Sgt. Kevin Carey. While officials are still investigating a motive behind the murders, news of the students’ deaths quickly sparked alarm over concerns of racial bias. The hashtag #MuslimLivesMatter was also created.

They were doing such amazing things, they didn’t deserve this. #CapitolHillshooting #MuslimLivesMatter pic.twitter.com/jFrTTS0pZp

On Wednesday, the Council on American-Islamic Relations urged police to investigate the murders as a possible hate crime. An official statement from the council specifically addressed Spencer’s Facebook account, in which he allegedly called himself an “anti-theist” and spoke out against “radical Christians and radical Muslims.”

“Based on the brutal nature of this crime, the past anti-religion statements of the alleged perpetrator, the religious attire of two of the victims, and the rising anti-Muslim rhetoric in American society, we urge state and federal law enforcement authorities to quickly address speculation of a possible bias motive in this case,” CAIR National Executive Director Nihad Awad said in the statement.

“Our heartfelt condolences go to the families and loved ones of the victims and to the local community.”

Correction: An earlier version of this story misstated the alleged shooter’s name. This has since been corrected.