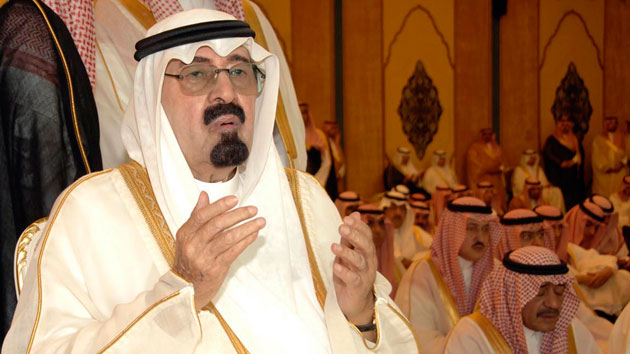 Shortly after Abdullah Bin Abdul-Aziz, the 90-year-old king of Saudi Arabia, died last Friday, the Pentagon and Army Gen. Martin Dempsey, the chairman of the joint chiefs of staff, paid their respects by inviting college students to participate in a “research and essay competition” in the late monarch’s honor. No prize has been announced, but the Pentagon issued a press release about the contest listing the deceased monarch’s considerable accomplishments: “the modernization of his country’s military,” his “lifetime” support of Saudi Arabia’s alliance with the United States, his support of “scholarly research,” and what Dempsey called the king’s “remarkable character and courage.” Although, as a woman, I wouldn’t be recognized as a full human being by the king, here is my essay contest submission:

The informal prohibition on female driving in Saudi Arabia became official state policy in 1990. During the 1990-91 Gulf War, female American soldiers were permitted to drive on military bases in Saudi Arabia, and Saudi women organized a protest demanding the right to drive in Saudi Arabia as well. Dozens of Saudi women drove the streets of Riyadh in a convoy to protest the ban, which then was just based on custom. In response, officials arrested them, suspended them from their jobs, and the Grand Mufti, the country’s most senior religious authority, immediately declared a fatwa, or religious edict, against women driving, stating that driving would expose women to “temptation” and lead to “social chaos.” Then-Minister of Interior Prince Nayef legally banned women’s driving by decree on the basis of the fatwa.

Human Rights Watch, December 1, 2013: Hundreds of thousands of workers were arrested and deported, some reporting prison abuses during their detentions. No standard contract for domestic workers was ever drafted. Human Rights Watch interviewed migrant workers about the arrests:

One of the Ethiopians, a 30-year-old supervisor at a private company, said he heard shouts and screams from the street, and left his home near Manfouha to see what was happening. When he arrived near Bank Rajahi on the road to the Yamama neighborhood, west of Manfouha, he saw a large group of Ethiopians crying and shouting around the dead bodies of three Ethiopians, one of whom he said had been shot, and two others who had been beaten to death. He said six others appeared to be badly injured.

He said he saw Saudis whom he called shabab (“young men” in Arabic), and uniformed security forces attack the Ethiopians who had gathered. The shabab were using swords and machetes, while some of the uniformed officers were beating the migrants with metal police truncheons, and other officers were firing bullets into the air to disperse the crowd. He said that he narrowly escaped serious injury when a Saudi man swung a sword at his head. It missed, but hit his arm, requiring stitches to close the wound.

On 6 November, the authorities sentenced Mikhlif al-Shammari , a prominent human rights activist and an advocate of the rights of Saudi Arabia’s Shi’a Muslim community, to two years in prison and 200 lashes on charges related to his peaceful activism. In a separate case, on 17 June 2013 Mikhlif al-Shammari had already been sentenced by the Specialized Criminal Court (SCC) to five years in prison, followed by a 10-year travel ban, on charges related to his peaceful activism. The court also banned him from writing in the press and on social media networks, and from appearing on television or radio.

King Abdullah of Saudi Arabia should overturn the lashing and prison term for a blogger imprisoned for his views and immediately grant him a pardon. Saudi authorities lashed Raif Badawi 50 times on January 9, 2015, in front of a crowded mosque in Jeddah, part of a judicial sentence of 1,000 lashes and 10 years in prison for setting up a liberal website and allegedly insulting religious authorities.

A federal prosecutor in Alexandria made a comment last year suggesting that a Falls Church man held in a Saudi Arabian prison had been tortured, according to a sworn affidavit from a defense lawyer that was recently filed in federal court in Washington.

The alleged remark by Assistant U.S. Attorney Gordon D. Kromberg occurred during a conversation with the lawyer, Salim Ali, in the federal courthouse in Alexandria, according to Ali’s affidavit.

The document was filed Oct. 12 in connection with a petition by the parents of the detained man, Ahmed Abu Ali, who are seeking his release from Saudi custody.The lawyer stated in the affidavit that he asked Kromberg about bringing Abu Ali back to the United States to face charges so as “to avoid the torture that goes on in Saudi Arabia.”

Kromberg “smirked and stated that ‘He’s no good for us here, he has no fingernails left,’ ” Salim Ali wrote in his affidavit, adding: “I did not know how to respond [to] the appalling statement he made, and we subsequently ceased our discussion about Ahmed Abu Ali.”

In conclusion, from Human Rights Watch:

For [Abdullah bin Abdul-Aziz’s half-brother and successor, Salman bin Abdulaziz] to improve on Abdullah’s legacy, he needs to reverse course and permit Saudi citizens to peacefully express themselves, reform the justice system, and speed up reforms on women’s rights and treatment of migrant workers.