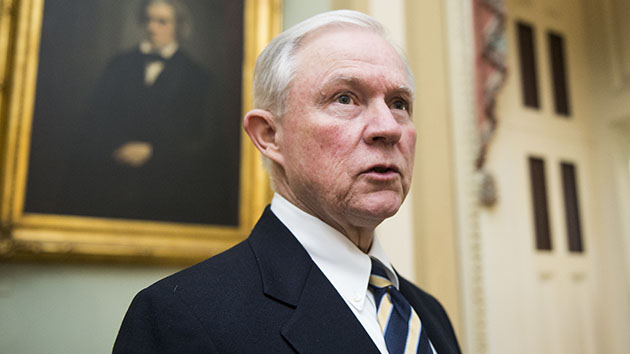 It wasn’t long ago that Sen. Jeff Sessions was waging a lonely battle against comprehensive immigration reform. ABC News called the Alabama Republican a “lone wolf” in his dogged quest to kill the Senate’s immigration reform bill, which passed the upper chamber in June 2013 on a 68-32 bipartisan vote. At one point, Sessions introduced an amendment to slash the number of immigrants allowed to enter the country legally—not even Texas firebrand Ted Cruz voted for it.

But Sessions’ days of fighting immigration reform from the sidelines are over. Last week, he became chair of the Senate judiciary subcommittee on immigration. The new face of Republican immigration policy has yet to make headlines like his anti-reform ally in the House, Rep. Steve King (R-Iowa), whose inflammatory rhetoric about undocumented immigrants (“deportables“) has made him a household name within the Latino community. But Sessions is just as hardline as King. And now his party has place him in a high profile position in the nation’s ongoing and contentious immigration debate.

“By choosing Sessions, Senate Republicans are handing over the agenda and a megaphone to their leading anti-immigrant voice,” America’s Voice, a pro-immigration-reform group, said in a seven-page memo circulated to reporters that enumerated Sessions’ anti-immigration track record.

Sessions’ new prominence could prove a public relations problem for the GOP heading into the next presidential campaign. Less than two years ago, in the wake of a presidential election in which the Latino vote helped doomed Republican Mitt Romney’s White House ambitions, the party called for bipartisan immigration reform. Now, Senate Republicans have elevated reform’s biggest foe.

Groups on the far right have celebrated Sessions’ ascendance. “The appointment of Sessions as the chairman of the subcommittee is a very positive step,” says Ira Mehlman, a spokesman for Federation for American Immigration Reform, a group with extremist ties that seeks to stem immigration into the United States.

“Mr. Sessions is a throwback to a shameful era which I know both black and white Americans thought was in our past,” the late-Sen. Ted Kennedy said during Sessions’ confirmation hearings for a federal judgeship.

The first test of Sessions’ influence came this week in the debate over a border security measure sponsored by Rep. Michael McCaul (R-Texas), the chairman of the House homeland security committee. This bill was supposed to be the kind of immigration legislation Republicans can get behind.

Not Sessions. The senator has opposed the measure, arguing that ramping up border protection is pointless without stricter interior enforcement, which he believes would deter people from entering the country illegally as well as roll back President Barack Obama’s executive actions to decrease deportations of undocumented residents. Moreover, conservative Republicans fear that GOP leaders in the House and Senate want to pass McCaul’s bill so that they can move on to other immigration issues opposed by the right, such as increasing the number of visas for high-skilled immigrant workers. And the conservative GOPers suspect that House Speaker John Boehner and his lieutenants are using McCaul’s measure as an excuse to skirt an all-out fight over Obama’s executive actions on immigration.

The House was scheduled to vote on McCaul’s bill on Wednesday, but Monday evening, the Republican leadership pulled the legislation due to the impending snow storm. The convenient delay gives Boehner and his lieutenants time to shore up support from their caucus’ most conservative members—or, if they can’t, scuttle the bill.

In opposing the McCaul border bill, conservative House members have cited Sessions position against it, and the senator can take credit for causing Boehner and GOPers who want to make progress on immigration a real headache. Score one point for Team Sessions.

For Jefferson Beauregard Sessions III, 68, fighting both parties on immigration has been a nearly decade-long crusade. But prior to that he was known mostly because of another issue: race.

In 1985, when Sessions was a federal prosecutor in his home state, President Ronald Reagan nominated him for a federal judgeship. But Sessions’ nomination ran into trouble in Washington—largely over questions about his views on race.

Not long before his nomination, Sessions had prosecuted three civil rights activists, a group known as the Marion Three that included a former aide to Martin Luther King Jr., for voter fraud. “The three had been working in the ‘Black Belt’ counties of Alabama, which, after years of voting white, had begun to swing toward black candidates as voter registration drives brought in more black voters,” a 2002 New Republic story on Sessions recounted. “Sessions’s focus on these counties to the exclusion of others caused an uproar among civil rights leaders, especially after hours of interrogating black absentee voters produced only 14 allegedly tampered ballots out of more than 1.7 million cast in the state in the 1984 election.” The Marion Three were acquitted after only a few hours of jury deliberations, and civil rights advocates used the case in their opposition to his nomination.

During Sessions’ judicial confirmation hearings, several witnesses provided damaging testimony about him. A Justice Department official said that Sessions had called the NAACP and the American Civil Liberties Union “un-American” groups that “forced civil rights down the throats of people.” A black attorney named Thomas Figures, who had worked in Sessions’ Alabama office, claimed that the nominee had referred to him as “boy.” Figures testified that after he had criticized a white secretary, Sessions had told him, “Be careful what you say to white folks.” Figures also maintained that Sessions had been reluctant to prosecute civil rights cases and had once commented that he was okay with Ku Klux Klan members “until I learned they smoked pot.”

“What sense does it make to continue legally importing millions of low-wage workers to fill jobs while sustaining millions of current residents on welfare?” Sessions wrote.

“Mr. Sessions is a throwback to a shameful era which I know both black and white Americans thought was in our past,” the late-Sen. Ted Kennedy (D-Mass.) said on the first day of Sessions’ confirmation hearings. “It is inconceivable to me that a person of this attitude is qualified to be a US attorney, let alone a US federal judge. He is, I believe, a disgrace to the Justice Department and he should withdraw his nomination and resign his position.”

In what was a rare event, the Republican-controlled Senate Judiciary Committee, which was led at the time by the late Sen. Strom Thurmond of South Carolina (who was once known as a crusader against civil rights), voted down Sessions’ nomination.

Sessions has always contended that the attacks against him were unfair. The comment about the NAACP and other civil rights groups being “un-American,” he said, was actually a reference to the organizations’ foreign policy positions. The comment about the KKK, he said, had been a joke. A few years ago, Sessions said Kennedy’s statement about him had been “exceedingly painful to hear” and “hurtful because it wasn’t true.”

The specter of those Senate hearings has haunted Sessions for years. And his foes in the current immigration debate have claimed his opposition to immigration reform is linked to his supposed racial insensitivity.

Sessions, though, explains his opposition to efforts to legalize undocumented immigrants and increase legal immigration as a populist defense of American workers whose jobs and wages he believes are being decimated by immigrant labor. He has urged his fellow Republicans to take up this mantra: opposing immigration to help working and middle-class citizens.

“What sense does it make to continue legally importing millions of low-wage workers to fill jobs while sustaining millions of current residents on welfare?” Sessions wrote in a 25-page handbook on the immigration issue that he distributed to every Republican in Congress this month. The policy brief claims that comprehensive immigration reform is nothing but a sop to elite CEOs who want to import cheap labor. Sessions proposes that Republicans focus on winning back lower-wage workers—those who broke for Obama over Romney in 2012—rather than placate corporate donors. It’s a message that jibes with Republicans’ overall attempt to shed their image as the party of the rich.

Immediately after taking over the subcommittee, Sessions announced that he would change its name to the “Immigration and the National Interest” subcommittee, “as a declaration to the American people that this subcommittee belongs to them,” not to the “financial and political elite.” He plans to hold hearings featuring the voices of down-and-out Americans who consider an influx of immigration at least partly responsible for dropping wages, lost jobs, and strains on community resources, such as hospitals and schools.

And Sessions is prepping for an all-out war on Obama’s immigration executive actions, when Congress considers funding for the Department of Homeland Security in late February. Not all Republicans are looking forward to a battle royal over fully funding the government agency in charge of border security and various anti-terrorism efforts. But if Sessions is able to exploit this fight and yank the immigration debate to the right—against the wishes of many within the GOP establishment—Republicans will have no one to blame but themselves.