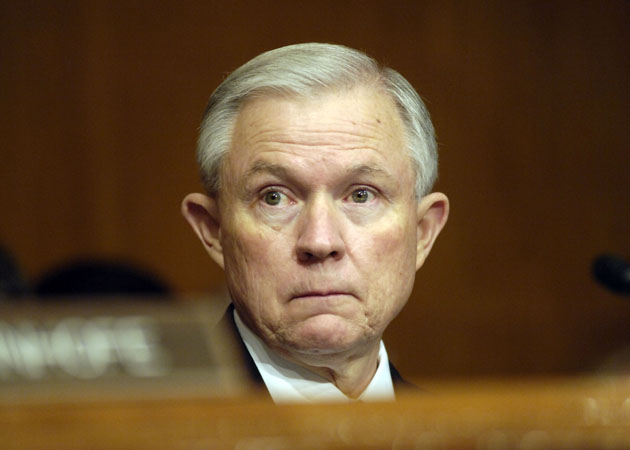 Is Barack Obama a “radical Machiavelli” bent on destroying American society so he can shape it into a totalitarian state? In February, Sen. Jeff Sessions (R-Ala.) endorsed a book that makes such a case.

Speaking at a conference run by David Horowitz, the onetime 1960s radical who remade himself as a conservative provocateur, Sessions, the ranking member of the Senate budget committee, opened his remarks with praise for Horowitz and his books:

I really liked A Point in Time. If you haven’t read that, it is a good book, a wise book, well in the tradition of the Western heritage of faith and reason, and gives us some perspective about who we are. And recently reading Radicals, I hit the last chapter lying in bed, and I awakened myself and had an epiphany, ’cause he was talking about our president. And I’ve been wrestling with how do we deal, what is this, how has this been working, and how can we do better, and how can we understand better, how to respond to his quite successful tactics politically. So I was so moved. I called [Horowitz]. He gave me some ideas. He’s written some papers. I passed them around—the draft—a bunch of senators, and shared those thoughts. I know [Sen.] Ron Johnson—I don’t know if Ron’s still here or not. He and I definitely have discussed what you shared with us, and it will make a difference in how we approach things.

On the surface, Sessions’ comments seemed relatively benign. But the senator was embracing a depiction of Obama in which Horowitz presents him as a lying and conniving radical who will do or say anything to amass more power and assert authoritarian control over the United States.

The last chapter of Horowitz’s 2012 book, Radicals: Portraits of a Destructive Passion—which prompted Sessions’ eureka moment—is entitled, “A Radical Machiavelli,” and it opens with a quote from Obama: “We are five days away from fundamentally transforming the United States of America.” In this chapter, Horowitz attempts to explain the progressive mindset. The key to understanding these folks and their ultimate aims, Horowitz contends, is Saul Alinsky, the legendary organizer. His influence, Horowitz notes, has extended to Obama and “captured the heart of the Democratic Party.”

Sessions was embracing a depiction of Obama…as a lying and conniving radical who will do or say anything to amass more power.

Horowitz conflates Obama with Alinsky and then proceeds to describe Alinsky in the harshest terms, asserting that his “entire career was devoted to the destruction of America’s social order.” Alinsky’s progressivism, Horowitz huffs, was “a declaration of war on a democracy whose individual freedoms are rooted in the institutions of private property, due process, and limited government, all of which his prescriptions would destroy.” And perhaps worse, Alinksy urged “radicals to infiltrate the Democratic Party and traditional institutions with the goal of subverting them.”

You can see where this is heading: Obama is an Alinskyite who has burrowed his way to the pinnacle of power. This is hardly a surprise, coming from Horowitz. One of his websites bears this slogan: “Inside Every Liberal Is a Totalitarian Screaming to Get Out.” And in the chapter Sessions hailed, Horowitz describes Alinsky’s disciples in stark terms: “Within the framework of their revolutionary agendas, they are flexible and opportunistic and will say anything (and pretend to be anything) to get what they want, which is power.”

And what do these people want to do with this power? Horowitz has the answer:

to create a new race of men and women who are able to live in harmony and according to the principles of social justice. To be as God. Creating such a race requires the total control—the totalitarian control—of individual behavior.

In other words, the system—the American system—should be burned to the ground, but to achieve this goal you must conceal your intentions. Conceal the goal and you can accomplish anything.

Horowitz clearly is saying that the president is a burn-down-the-system nogoodnik masquerading as a pragmatic moderate. There’s even evidence—if you look closely enough. Horowitz points to the speech Michelle Obama delivered at the 2008 Democratic convention, in which she described her husband’s work as a community organizer: “Barack…spoke words that have stayed with me ever since. He talked about ‘the world as it is’ and ‘the world as it should be.’ And he said that, all too often, we accept the distance between the two and we settle for the world as it is, even when it doesn’t reflect our values and aspirations.” Believing he has unearthed a damning clue, Horowitz declares, “It was pitch-perfect Alinskyism.” He adds, “There is nothing new in the strategy of appearing moderate in order to disarm your opposition. It was Lenin’s idea, too.”

Having equated the Obamas with Alinsky, Horrowitz goes on to say that Alinsky-style radicals have no scruples. They deceive, they lie, and sometimes they even murder to achieve their goals. They are, he says, in “a permanent war” and do not “worry about the legality or morality” of their actions. Referring to “revolutionaries” like Alinsky and Lenin, Horowitz asserts, “What they offer is a destructive rage against the worlds they inhabit” and “a chaos designed to produce a totalitarian state.”

This is heady stuff. Horowitz paints a picture of radicals who abide by no legal or moral codes and who desire to destroy the current order in order to create a totalitarian state. And Sessions told the assembled that he found this chapter so illuminating that he asked Horowitz for further advice on how to deal with the wily president. (Radicals features a front-cover blurb from former GOP Sen. Jon Kyl (R-Ariz.): “David Horowitz knows more about the Left than anyone in America.”)

But when Mother Jones asked Sessions if he shares the over-the-top, Horowitzian view of Obama, a Sessions aide insisted that the senator does not see the president in such terms and sent this statement:

Senator Sessions has always been respectful in his critiques of the President’s policies. If you listen to the Senator’s address it’s obvious that he’s not saying anything remotely along the lines of what you suggest.

The Senator’s comment was explicitly in reference to the White House’s communications strategy. As he explained in his speech: “President Obama has framed every fiscal issue and his own reelection campaign as a choice between his compassion and Republicans’ uncaring fiscal discipline emphasis. According to this fiction, Republicans are the protectors of the rich, while the President and his party are champions of the poor and the middle class. The Left’s big spending policies are portrayed as expressions of concern for those in need, while conservatives’ desire to achieve financial stability and economic growth are portrayed as heartless and uncaring. To an alarming degree, the President has succeeded in framing the debate around this fundamentally egregious falsehood… We must and will make the moral case for conservative reform, and explain the fundamental truth—that our ideas are the only real way to reduce poverty in America. Truth is always the best defense against slander…We will offer real jobs, real independence and prosperity to the American people. The real measure of compassion, we will explain, is not how much money we spend on poverty, but how many people we help to rise out of poverty.”

Sessions did devote part of his speech to complaining that the left has too often succeeded in defining conservatives as heartless and handmaidens of the well-to-do, a point that he and Horowitz have often been keen to make. (Horowitz did not respond to a request for comment.) Yet the book chapter that jazzed Sessions is predominantly Horowitz’s attempt to explain what he fervently considers to be the dark, unprincipled, and inevitably totalitarian mindset of Alinskyites—with whom he associates the Obamas. This chapter is not about how best to frame debates over spending and taxes, and it is certainly no respectful critique of the president. If Sessions does believe, as he told Horowitz and his crowd, that this chapter explains Obama, he has accepted a fundamentally radical and terrifying assessment of the man.