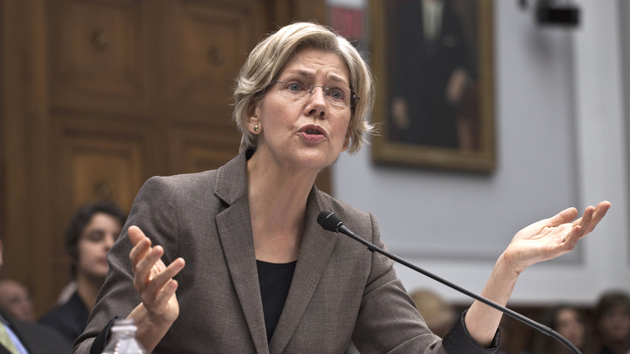 Elizabeth Warren is off to a running start in her new leadership role with the Senate Democratic caucus. She called out Walmart for its terrible labor practices. She wrote an op-ed this week warning the president against appointing Wall Street insiders to the Federal Reserve. And Tuesday morning, she called on financial institutions to prove that they can protect customer data from cybercriminals.

Over the past year, cyber attackers have stolen roughly 500 million records from financial institutions, according to federal law enforcement officials. In a joint letter also signed by Rep. Elijah Cummings (D-Md.), Warren asked 16 firms—including Bank of America, Citigroup, Goldman Sachs, and Morgan Stanley—for detailed information about cyberattacks they experienced over the past year and how they plan to prevent future breaches.

“The increasing number of cyberattacks and data breaches is unprecedented and poses a clear and present danger to our nation’s economic security,” the lawmakers wrote in the letter. “Each successive cyberattack and data breach not only results in hefty costs and liabilities for businesses, but exposes consumers to identity theft and other fraud, as well as a host of other cyber-crimes.”

Warren and Cummings requested the firms provide information on the number of customers that may have been affected by breaches, data security measures the companies have taken in response, the value of the fraudulent transactions connected with the cyber attacks, and who is suspected to have carried them out. The letters also request that IT security officers at each firm brief the lawmakers on how they are protecting their data from cybervillains.

The lawmakers hope to use the information the firms provide to inform new federal cybersecurity legislation. Current cybersecurity law is unclear about when companies are required to notify the government about a data hack. Warren has previously called on Congress to give the Federal Trade Commission more power to regulate data breaches.

The American financial sector is one of the most targeted in the world, according to the FBI and Secret Service officials. The hackers who stole data from JPMorgan Chase earlier this year—compromising information from 76 million households—also targeted 13 other financial institutions, Bloomberg reported last month.