I watch too much TV drama, so I can say this with a degree of certainty: It’s rare that climate change comes up. (Television news programs also contain “tepid” coverage, in general, according to watchdog group Media Matters). That’s why it was so weird/exciting for this climate reporter when global warming received its very own subplot on Aaron Sorkin’s HBO drama The Newsroom over the last two episodes.

First, a little context: Maggie Jordan (Alison Pill) is the show’s once daffy news producer whose role this season seems exclusively designed to reverse earlier charges of sexism against Sorkin. She’s now good at her job! During a convoluted scene on a train from Boston to New York, Maggie overhears and records a top EPA official talking shit on the phone about President Obama to another journalist, off-the-record. Even though that agreement of confidentiality doesn’t extend to the other Amtrak passengers, she eventually tells the official she won’t use his juicy Obama-dissing quotes. So impressed by her ethics, the official, Richard Westbrook (Paul Lieberstein), rewards her with a scoop: an embargoed EPA report. WHOA! WHAT A SCOOOOOP! (For the uninitiated, while a heads-up about a study is great to get a jump on your competition, reports are circulated and embargoed all the time). Anyway… Maggie also gets an exclusive interview with the official, the deputy assistant administrator of the EPA (WHAT A GET!) and in the most recent episode, she produces a segment for host Will McAvoy (Jeff Daniels) about the report’s dire warnings.

The scene is odd for a number of reasons. The Newsroom packages its drama based on last year’s events, and at that time, the news that the world was approaching 400 parts per million of carbon dioxide in the atmosphere had been publicly anticipated for weeks. So, not a scoop in any way, or anything that anyone following the science didn’t already know.

But putting that aside, let’s take a look at Sorkin’s “facts”, as presented in the episode. How do they measure up? Let’s go line-by-line through the scene above. 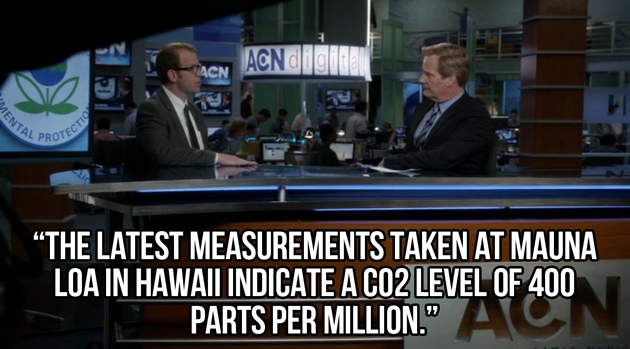 In the weird parallel universe of The Newsroom, I’m not sure when these “latest measurements” were meant to have been taken. But he’s right. We covered this at the time: The world passed that 400 ppm threshold for the first meaningful way in May 2013, when the daily mean concentration of carbon dioxide was higher than at any time in human history, according to the National Oceanic and Atmospheric Administration (NOAA). The measurements are indeed taken at the Mauna Loa Observatory in Hawaii; you can follow what’s known as the “Keeling Curve”—a measurement of atmospheric concentration of CO2—on Twitter, naturally, thanks to the Scripps Institution of Oceanography. 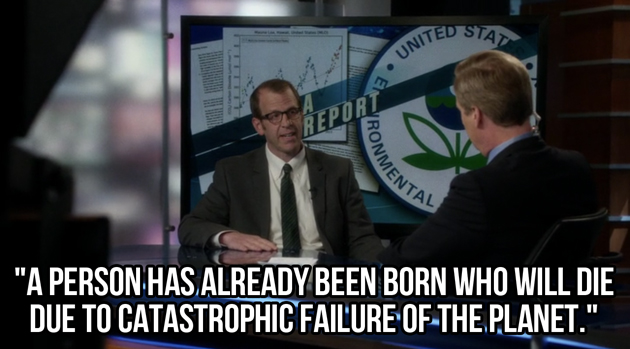 Depends what you’re defining as catastrophic failure, I suppose.  Say you were born last year, when I assume this episode was meant to be set. If we follow along current emissions trends, the planet will be 3.96°F-8.64°F (2.2°C–4.8°C) hotter than preindustrial times by your retirement. (You can type your birth year into this cool interactive, driven by data from the Intergovernmental Panel on Climate Change, to check how hot it will be when you’re old). That’s above temperatures recommended to be in the supposedly “safe” zone by the IPCC, and could definitely result in a variety of “catastrophes” and “failures”. As deaths increase due to things like extreme weather, droughts and wildfires, this statement seems true enough when applied to individual episodes of calamity, which will surely increase. (The number of annual deaths in the UK due to heat, for example, is predicted to rise by 257 per cent by 2050.) The EPA official is right, in one sense. But it’s also arguable that deaths are already and will continue to be linked to climate change events. The line in the script infers the failure of the planet as a whole, which I think is artful flourish to illustrate just how glum this fellow is feeling. 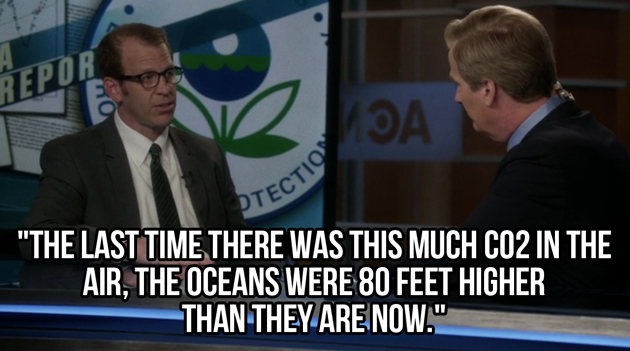 Yup. That’s what the science says. The last time the atmosphere clocked 400 ppm it was 3 million years ago—the “Mid-Pliocene”—when sea levels were as much as 80 feet higher than today (see this 2007 research paper authored by a group led by NASA Goddard Institute for Space Studies and Columbia University.) I’d probably add an “around” or “about” before the “80 feet higher” in the above statement; the studies leave a margin of error. But this statement checks out. 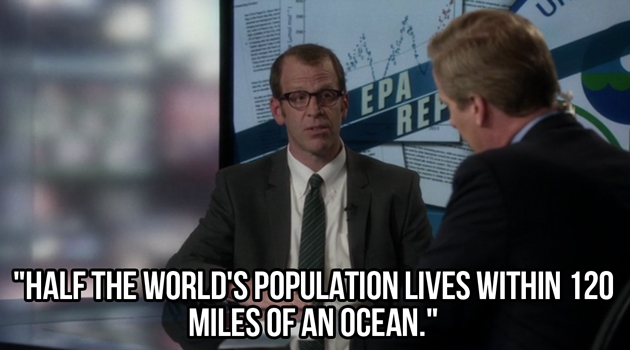 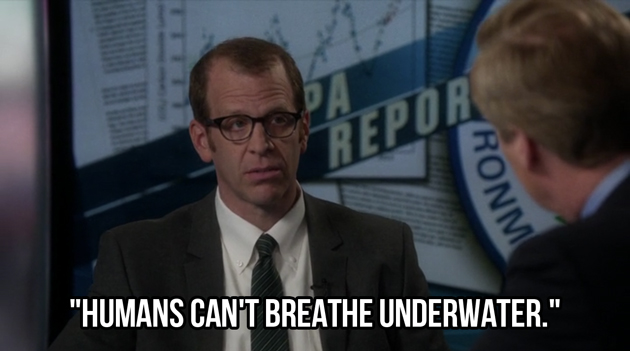 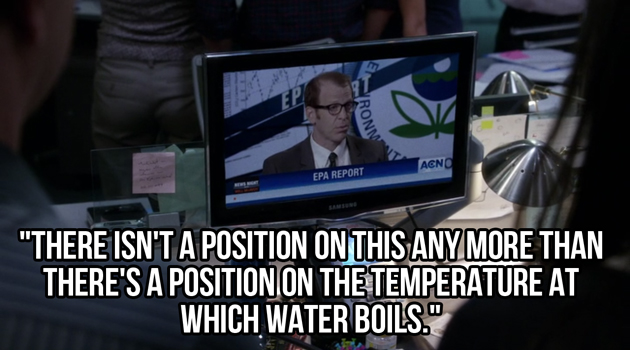 There’s consensus amongst 97 percent of climate scientists that global warming is happening and that’s it’s a manmade disaster. And I’ve heard climate scientists use this analogy before. (For what it’s worth, there are other things that can influence the boiling point of water, including altitude.) 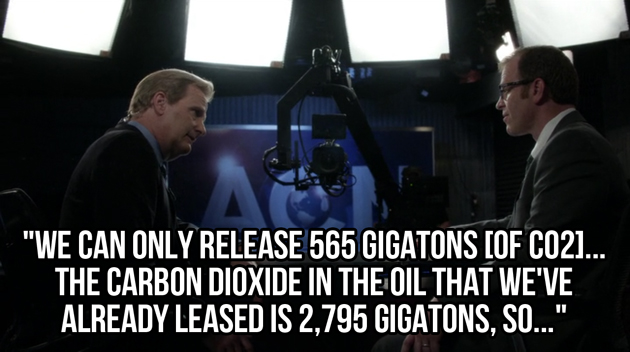 He’s talking about the “carbon budget”, and again this is sound, despite Newsman Will’s growing anguish at a pretty devastating interview. The 565 gigaton number was popularized by Bill McKibben in a 2012 Rolling Stone article that Newsroom writers seem to have read. The number is “derived from one of the most sophisticated computer-simulation models that have been built by climate scientists around the world over the past few decades” (done by financial analysis firm Carbon Tracker) and is what we can add into the atmosphere by mid-century and still have a reasonable chance of success of staying below that safe two degrees warming threshold. Our grumpy scientist is so despondent because, yes, 2,795 is the number of gigatons of carbon already contained in the proven coal and oil and gas reserves in the hands of fossil-fuel companies and petrostates. In short, it’s the fossil fuel we’re currently planning to burn, writes McKibben. Carbon Tracker says 80 percent of these assets need to remain unburned. 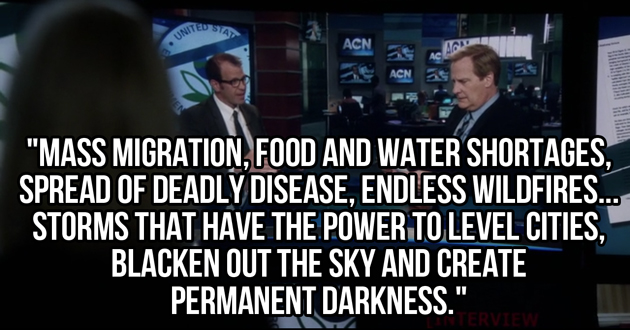 All of these things are predicted by the IPCC—I mean, not the permanent darkness thing, I don’t think that’s meant to be scientific. But yes, as we reported in May this year, Europe faces freshwater shortages; Asia can expect more severe flooding from extreme storms; North America will see increased heat waves and wildfires, which can cause death and damage to ecosystems and property. Especially in poor countries, diminished crop yields will likely lead to increased malnutrition, which already affects nearly 900 million people worldwide.

So, in all, well done Newsroom. Informative, accurate, if a little heavy-handed on the doom and gloom.