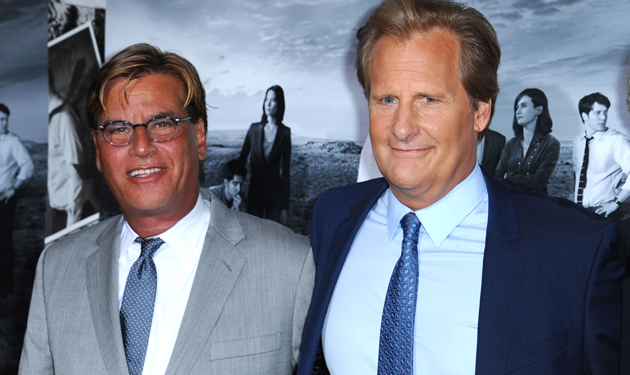 On Wednesday night, HBO and The New Republic hosted a special sneak peek of next Sunday’s episode of The Newsroom in Washington, DC. The event was held just a couple blocks away from the White House at the Motion Picture Association of America (MPAA), the place where the de facto censorship board for American cinema conducts its business. The cocktail reception and subsequent screening were attended by a few lucky fans, some TNR staff (including editor Julia Ioffe), the Hill‘s gossip writer Judy Kurtz, and Chris Hughes, Facebook’s cofounder and TNR editor in chief, among others. The evening concluded with a Q&A with Newsroom—and West Wing, and Sports Night—creator Aaron Sorkin, led by TNR literary editor Leon Wieseltier, a Newsroom consultant who has long been friendly with HBO (you might have seen him on The Sopranos that one time, for instance).

During the Q&A, Sorkin confirmed that HBO has now offered him the opportunity to make a third season of The Newsroom, and discussed a wide range of topics—his show, journalism, Hollywood, baseball, theater, and so forth. He offered up some begrudging praise for the New York Times (“I am scared to death of [them],” he said, referring to the Times‘ arts section), and some real-deal praise for playwrights such as Harold Pinter and David Mamet (“Mamet can write concertos of people saying nothing,” Sorkin—himself a playwright—said).

Sorkin, however, did not have any kind words for the Huffington Post, the news and commentary website that he believes helps power “a genuinely damaging force in our culture.” After being asked by Wieseltier if he believed the media had abdicated its role and duty to the public, Sorkin only called out one outlet by name. Here’s what he had to say:

I don’t think we’re very nice to each other anymore…There’s just too much money to be made and too much fun to be had laughing at somebody else fail. And that’s become okay. It used to be the kind of thing that you didn’t do in public…And now it’s what covers…the homepage of the Huffington Post. “13 Epic #Fails.” There’s the need to put an exclamation point after everything, and there’s the need to…create fantastic stories instead of just reporting on things that we need. So the adjectives and adverbs that you’ll see in headlines are always about how somebody issued a blistering this against [someone or something]—just anything to get a clip.

(In a recent episode of The Newsroom, the character of Maggie Jordan censures HuffPost for objectification-driven content, mainly that of the “sideboob” variety. This is the same episode in which Sorkin name-checks BuzzFeed and slams the birtherism-promoting website WorldNetDaily.)

I tweeted Sorkin’s sentiments to a few HuffPost employees, and they didn’t seem too broken up about it. “Let’s have a walk and talk about this,” editor Luke Johnson replied, referencing the mobile, banter-packed storytelling technique popularized by Sorkin and Sports Night and West Wing director Thomas Schlamme. “Aaron Sorkin Said WHAT About A Popular News Website?!” reporter Ryan J. Reilly tweeted mockingly, alluding to his site’s notorious clickbait.

Even if Sorkin’s comments do inspire the ire of certain people at the Huffington Post, that’s probably far from his biggest concern at the moment. During the HBO/TNR event, Sorkin talked about the real-life inspiration for the primary story arc of season two. This year, the ACN news team runs a blockbuster investigation into Operation Genoa, a black op in which US special forces allegedly used sarin gas on Pakistani civilians (an act that would constitute a major war crime). The exposé turns out to be a colossal, libelous, retracted fuck-up with little, if any, grounding in reality.

This season’s story arc was inspired by CNN’s retracted 1998 report on Operation Tailwind, a covert American mission in southeastern Laos during the Vietnam War. When discussing this fact on Wednesday night, Sorkin chose his words carefully and emphasized multiple times that “Genoa is not a dramatic reenactment of Tailwind,” nor is it “based on” the operation in Laos. The events at CNN merely served as inspiration, he stressed. The reason Sorkin spoke cautiously was, he told the audience, because “a number” of people involved with the story (people who would later sue CNN) have now found fresh reason to get mad and potentially litigious—all thanks to The Newsroom‘s second season.

“[They] have now lawyered up again, and they’re after me,” he said. He did not specify beyond that.

The headline on this story has been changed to more clearly reflect Sorkin’s comments about the press.