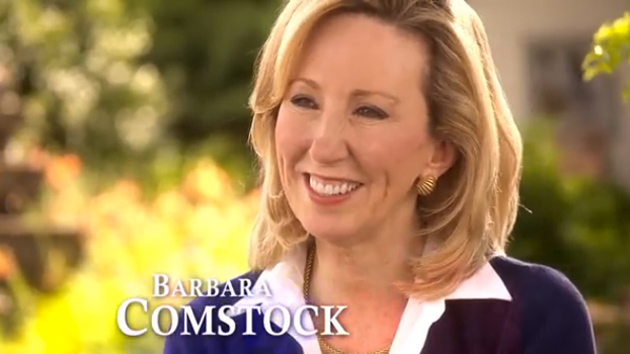 What do Blackwater’s founder, Koch Industries, and Mitt Romney have in common? They’ve all been represented by Northern Virginia’s newest congresswoman.

Republican Barbara Comstock cruised to victory on Tuesday, easing past Fairfax County supervisor John Foust in a suburban DC district. Comstock will replace retiring GOP Rep. Frank Wolf, for whom she once worked as an aide. You’ll be hearing a lot more from her.

Electing Comstock—a veteran of two Romney campaigns, the Bush White House, and the Clinton wars—was personal for establishment Republicans. As I reported in an April profile, she got her start as an investigator on the House Oversight and Government Affairs Committee in the 1990s, carving out a reputation as one of the Clintons’ most obsessive critics. She parlayed her work as opposition-research guru for George W. Bush’s first campaign into a job as a spokeswoman for Attorney General John Ashcroft. She then moved into crisis PR, where she repped clients such as Blackwater founder Erik Prince and disgraced Cheney aide Scooter Libby. From there, she moved on to lobbying, on behalf of companies like Koch Industries and the private prison giant GEO Group. If liberals were upset about it in the 2000s, chances are Barbara Comstock was involved somehow.

Although the 10th district leans red, Democratic groups poured more than $1.2 million into the race in the hopes of expanding on their gains in an increasingly blue state. Dismissing Comstock’s work in DC, Foust said of his opponent, “I don’t even think she’s had a real job.” In response, Republicans flooded the airwaves with ads like this one, slamming Foust as a hurtful misogynist:

The ad doesn’t quite get it right—Foust was attacking all women in the same way that Republicans who insist President Barack Obama never held a real job are attacking all men.

*Correction: This story originally stated that Kaine is from the DC suburbs; he is from Richmond.