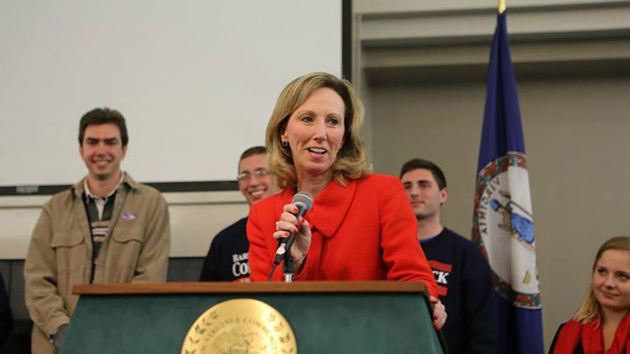 It was early April, debate night for the half-dozen Republican candidates vying to replace retiring Rep. Frank Wolf (R-Va.), and the front-runner, Del. Barbara Comstock, was getting a taste of her own medicine. That is, she was on the receiving end of some premium opposition research.

Comstock earned her stripes as the consummate Washington political operative by digging up dirt on the Clinton White House. She would later go on to hang out a shingle as a hired PR gun and lobbyist for some of DC’s most controversial figures, including ex-Dick Cheney aide Scooter Libby and Blackwater’s Erik Prince. She’d built a career out of driving the narrative.

But now, on stage at a middle school in Sterling, Virginia, all she could do was shake her head as Rob Wasinger, one of her opponents, went on the offensive. Wasinger, a onetime chief of staff to ex-Kansas Sen. Sam Brownback, invoked Comstock’s lobbying work on behalf Carnival Cruise Corporation. The company, he explained, earned $236 million in taxpayer funding from the Hurricane Katrina relief bill in 2005, ostensibly to provide housing for evacuees. But the boats it sent to the Gulf Coast were never more than half full and the cruise company charged more than twice what it would have for an actual cruise.

“How can we possibly trust her to cut government spending when she’s been first in line at the trough?” Wasinger asked.

It was the kind of political hit Comstock mastered as a political operative and opposition research guru.

Comstock’s political ascent began after she attended Georgetown Law, when she returned home to Fairfax County to raise her three kids and take a job with Wolf, her local congressman. She soon moved up the ladder, to a spot on the House Oversight and Government Affairs Committee, working under Rep. Dan Burton (R-Ind.)—a Clinton antagonist so devoted to the cause he once shot a pumpkin to prove that White House chief of staff Vince Foster had been murdered.

From a windowless first-floor office, where she changed the locks to keep out even the cleaning staff, Comstock would hold all-night vigils to keep watch over boxes of subpoenaed Clinton administration documents she feared would be stolen by Democrats. Her fixation was the White House travel office, where employees who were considered disloyal were replaced with Clinton allies. It was the administration’s first major scandal (although the president was absolved of wrongdoing), and it was in no small part driven by Comstock’s marathon workdays. At one point, her onetime ally David Brock recalled in his 2001 book, Blinded by the Right, Comstock and a crew of fellow staffers cased a Clinton appointee’s Georgetown house looking for evidence of wrongdoing.

“Working with Barbara Jean Comstock is like having the entire IBM mainframe working with you,” Barbara Olson, a friend and colleague on Burton’s committee, wrote in her memoir. (Olson, who was married to then-Solicitor General Ted Olson, was killed in the 9/11 attack on the Pentagon.) Karl Rove has called her a “walking, talking human computer.”

When the Clinton years came to an end, Comstock jumped to the Republican National Committee’s war room, where she ran the party’s opposition research operation against Vice President Al Gore. Comstock called her unit “Chicks With Attitude”—a dig at the Gore campaign, whose dark arts department had branded itself as the “Men of Zeal“—and crafted a narrative, adopted by the press, of the vice president as a serial exaggerator. “She has a wonderfully devious mind,” one reporter told the New York Post. The Washington Post called her a “one-woman wrecking crew.” After Election Day ended in deadlock, Comstock moved to Tallahassee to monitor the recounts.

After a stint as a spokeswoman for the Department of Justice in the early days of the Bush administration, Comstock cashed in. She started a crisis public relations firm, Corallo-Comstock, and marketed it toward the Bush administration’s most beleaguered allies. Along with repping Scooter Libby and Erik Prince, she was also retained by House Majority Leader Tom DeLay (R-Texas) when he was indicted on charges of illegally laundering campaign contributions.

Comstock also lobbied for a collection of high-powered clients including the Recording Industry Association of America, Comcast, Koch Industries, Chiquita bananas, and the private-prison company GEO Group—which at the time was pushing her former employers in the Department of Justice for a new contract. “She has made extensive use of the revolving door both for self-enrichment and for the profits of her clients,” says Craig Holman, a lobbyist for the government watchdog, Public Citizen.

But Comstock had political ambitions of her own. After working for Mitt Romney’s 2008 presidential campaign, she challenged a Democratic member of Virginia’s House of Delegates and became the only Republican to represent an inside-the-Beltway district.

When Wolf announced his retirement in December, Comstock entered the race to succeed him. She quickly became a target in the latest GOP turf war. As an anti-Comstock opposition research document leaked to the Daily Caller in February put it, “She completely represents what the new conservative movement…is moving away from.”

At the debate in Sterling, Comstock fiddled with her smartphone and largely spoke past her competitors, positioning herself as a candidate who could bring suburban women voters back to the party in November. But the chatter kept coming back to her record. “All of us go to tea party meetings—except Barbara,” said Howie Lind, a former state GOP official who is also running in the primary. He was referring to two scheduled meetings with a tea party group in the western part of her district that Comstock had canceled.

Her foes have also zeroed in on a vote she cast in 2008—for Barack Obama. At the April debate, Comstock explained her choice in that year’s Democratic presidential primary by invoking Rush Limbaugh, whose “Operation Chaos” encouraged Republicans to support Hillary Clinton in order to prolong the Democratic nominating process. This explanation, however, made little sense. Virginia’s primary that year predated Operation Chaos and, anyway, the entire point was not to vote for Obama. Days later, her campaign clarified to the Washington Post that her memory was mistaken.

Del. Bob Marshall, a conservative gadfly who came within a handful votes of being the party’s US Senate nominee six years ago, represents Comstock’s most serious challenge for the nomination. A 69-year-old prone to telling long-winded stories on stage, Marshall has a record of eyebrow-raising rhetoric. Sometimes “incest is voluntary,” he said in 1980. And he observed in 2010 that “when you abort the first born of any, nature takes its vengeance on the subsequent children.” Dubbed “Sideshow Bob” by his detractors, Marshall is one of the most right-wing state legislators east of the Mississippi River. Yet he has been reelected delegate 11 times in a district President Barack Obama won by 11 points.

Marshall, like Comstock, can trace his Republican lineage to revered conservative figures. He boasts that as a young Capitol Hill staffer in the 1970s he wrote the Hyde Amendment, which prohibits the federal government from paying for abortions. His mentor was Robert “B-1 Bob” Dornan, the Orange County congressman best known for outing a gay Republican colleague on the House floor. Marshall says he and Dornan keep in touch regularly. (To prove his point, he whipped out his cellphone to show me the call log.)

Despite the opposition research hurled her way, Comstock remains the favorite heading into Saturday’s “firehouse” primary, a one-day affair paid for by the state party with fewer polling locations than a regular election. And her bank account is a big reason why.

Comstock’s district is as close as K Street gets to official congressional representation. Her state delegate district includes McLean, the tony Virginia suburb that many GOP powerbrokers call home; as a consequence, her fundraising filings look like a roster of Republican convention speakers. Since 2009, she has received sizable contributions from: one former Republican National Committee chair, two former governors, four former senators, eight ex-congressmen, and three former cabinet officials—plus George W. Bush’s White House counsel, his SEC chairman, his top strategist, his solicitor general, and his dad’s campaign manager. Scooter Libby chipped in, too. Mitt Romney hosted a fundraiser for her first campaign for delegate, and is planning another one in the near future to boost her congressional bid.

Without a comparable Rolodex, Comstock’s frustrated rivals can only sling insults at her donors. Paul Singer, a Republican donor who has given six-figure donations to Comstock’s various campaigns, is in Marshall’s estimation a “billionaire hedge fund manager whose son thinks he married a man”—a reference to Singer’s gay son who has motivated Singer to promote marriage equality. (Comstock has not endorsed gay marriage.)

After the debate in Sterling, Comstock made her way through a small crowd of supporters, most of whom want to extend their apologies for the accusations on stage. “They’re bullies,” Comstock said, harking back to another one-time Republican star whose career was derailed by a piece of well-placed oppo. “It’s like George Allen said—you just have to smile.”