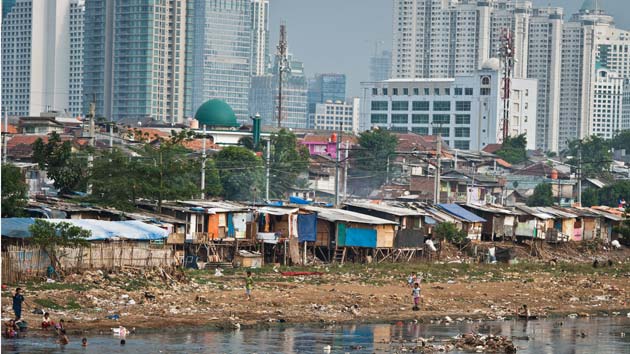 This story was originally published on BillMoyers.com.

Global inequality, like global warming, is a disease that may be too far along to ever be cured.

We seem helpless, both in the US and around the world, to stop the incessant flow of wealth to an elitist group of people who are simply building on their existing riches. The increasing rate of their takeaway is the message derived from the Credit Suisse Global Wealth Databook (GWD).

It’s already been made clear that the richest Americans have taken almost all the gains in US wealth since the recession. But the unrelenting money grab is a global phenomenon. The GWD confirms just how bad it’s getting for the great majority of us.

1. US: Even the upper middle class is losing

In just three years, from 2011 to 2014, the bottom half of Americans lost almost half of their share of the nation’s wealth, dropping from a 2.5 percent share to a 1.3 percent share (detail is here).

Most of the top half lost ground, too. The 36 million upper middle class households just above the median (sixth, seventh, and eighth deciles) dropped from a 13.4 percent share to an 11.9 percent share. Much of their portion went to the richest one percent.

2. US: In three years, an average of $5 million went to every household in the one percent

A closer look at the numbers shows the frightening extremes. The bottom half of America, according to GWD, owned $1.5 trillion in 2011. Now their wealth is down to $1.1 trillion. Much of their wealth is in housing equity, which was depleted by the recession.

The richest Americans, on the other hand, took incomprehensible amounts of wealth from the rest of us, largely by being already rich, and by being heavily invested in the stock market. The following summary is based on GWD figures and reliable estimates of the makeup of the richest one percent, and on the fact that almost all the nation’s wealth is in the form of private households and business assets:

3. World: The one percent’s wealth grew from $100 trillion to $127 trillion in three years

A stunning 95 percent of the world’s population lost a share of its wealth over the past three years. Almost all of the gain went to the world’s richest one percent.

Again, the gains seem almost incomprehensible. The world’s wealth grew from $224 trillion to $263 trillion in three years. The world’s richest one percent, who owned a little under $100 trillion in 2011, now own almost $127 trillion. For every dollar they possessed just three years ago, they now have a dollar and a quarter.

From New York and LA and San Francisco to London and Kenya and Indonesia, the rich are pushing suffering populations out of the way to acquire land and build luxury homes. The “winner-take-all” attitude is breaking down society in the US and around the world.

There’s a lot more in the GWD, and it doesn’t get any prettier. It tells us what unregulated capitalism does to a society.

In an upcoming post, we’ll consider what has to be done to end the madness.