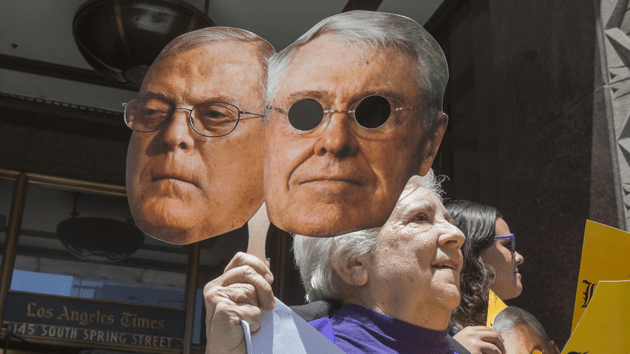 The Koch brothers, David and Charles, on a protest signRingo Chiu/ZUMA

Republicans’ most likely path to retaking the Senate in November requires GOPers to pick up seats in six key states: Alaska, Arkansas, Louisiana, Montana, South Dakota, and West Virginia. Of the six, Alaska—where Democratic Sen. Mark Begich is facing off against former Republican Attorney General Dan Sullivan—may be the closest race. That’s why right-wing groups backed by the likes of the Koch brothers and Karl Rove are dumping millions into the state—and why Alaska unions are pulling out all the stops this year to make sure Begich, a fierce supporter of labor, carries the day.

“This is literally the most active we’ve ever been in an election cycle,” says Vince Beltrami, the president of the Alaska AFL-CIO, which represents nearly all unions in the state.

Union members have been working the phones, pushing out mailings, and canvassing on behalf of Begich. Volunteers have even taken the unusual step of door-knocking in areas far outside of Alaska’s urban centers, says Jerry McBeath, a professor of political science at the University of Alaska-Fairbanks. Because of the unprecedented level of campaign action this year, Beltrami says, the AFL-CIO had to rent out an extra 7,000-square-foot warehouse.

In addition to boots-on-the-ground support for Begich, unions are also throwing down for TV ads to help ensure the freshman senator gets a second term in office. The political action committee affiliated with the International Association of Fire Fighters, for example, recently spent $165,000 on TV ads against Sullivan. The National Education Association’s super-PAC unveiled an ad in early September slamming Sullivan for a misleading claim he made about going after a Wall Street firm that gave the state bad financial advice and cost the public pension fund billions of dollars. Around the same time, four statewide unions—Alaska Professional Fire Fighters, Alaska Public Employees Association, Alaska State Employees Association, and National Education Association-Alaska—held a press conference in midtown Anchorage to respond to the same disingenuous ad.

Labor unions are some of the top contributors to Senate Majority PAC, the organization that provides most of the funding for Put Alaska First, the political action committee that backs Begich and has run a majority of commercials supporting him.

Begich has a solid pro-labor track record. Since his election to the Senate in 2009, he has backed legislation that would give collective bargaining rights to public safety officers, cosponsored the Employee Free Choice Act, which would make it easier for workers to organize for better wages and benefits, and voted against a bill that would have banned Transportation Security Administration employees from collective bargaining. After Begich won his Senate race in November 2008, he delayed his resignation as mayor of Anchorage to oversee the signing of generous five-year contracts with unions representing municipal workers, firefighters, electrical workers, and cops. One out of every four Alaskans is either in a union or has a family member in a union. The state has the second-highest union membership rate in the country.

The giant push by labor this year comes not only because the race is one of the most competitive in the country and could decide which party controls the Senate. The wave of union action is also a backlash against the onslaught of money pouring into the state in support of Sullivan from the billionaire Koch brothers’ dark-money group Americans for Prosperity and GOP operative Karl Rove’s super-PAC, American Crossroads. The groups—which support the rollback of collective bargaining rights and back right-to-work laws, which prevent unions from compelling employees to join or pay dues to a union—are dumping money into the Alaska Senate race for the first time ever.

“They’re up here on the airwaves 24 hours a day, seven days a week, trying to tie Mark to Obama,” Beltrami says. “They say things 50 times a day on the airwaves that aren’t true. You gotta push back.”

Unions have a unique edge when it comes to pushing back, McBeath explains. He says unions could swing this election in Begich’s favor because the amount of outside money flowing in means “the airwaves are almost bought out, and other means of campaigning—like door-to-door—are more important than they would be in a typical Senate race.”

Begich has raised a total of $8.4 million so far and has spent $6.4 million. Sullivan has raised $4 million, of which he has spent about $3 million.

It makes sense that the unions are going no-holds-barred to make sure Begich wins in November. It’ll be rough going all the way though—in part because not all rank-and-file members will fall in line with union leadership at the polls, says Carl Shepro, a former political science professor at the University of Alaska-Anchorage. “There are so many conservative voters in Alaska,” he says. Even if they’re part of a union, “that doesn’t mean that they’ll vote liberal.”