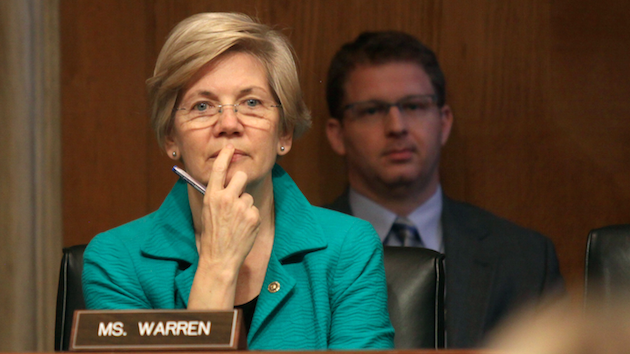 If the GOP wins the Senate, they’ll no doubt use the opportunity to push through a range of measures that are kryptonite to Democratic voters—new abortion restrictions, limits on the ability of the Environmental Protection Agency to combat climate change, a relaxation of the rules reining in Wall Street’s worst excesses.

But Republicans are particularly keen on handicapping one particular federal watchdog: the Consumer Financial Protection Bureau (CFPB), the three-year-old agency that Sen. Elizabeth Warren (D-Mass.) devised and helped build in the wake of the financial crisis.

The bureau’s job is to make sure Americans aren’t getting screwed by mortgage lenders, credit card companies, debt collectors, and other financial institutions. It’s the first federal agency designed specifically to protect everyday consumers from financial wrongdoing, and Republicans have done everything in their power to hobble the agency—including fighting the confirmation of its director, Richard Cordray. Winning the Senate in November could be their best chance to roll back Warren’s greatest accomplishment.

“You just have to watch the House to see what is going to come out of the Senate.”

Half of their work is already done. The House has passed a bill that would limit the bureau’s power by replacing its director with a five-member panel, and subjecting its budget to the congressional appropriations process—meaning that hostile lawmakers could starve it to death. (Unlike most federal agencies, the bureau is bankrolled by the Federal Reserve, an effort to free it from the whims of partisan politics.) House Republicans have also introduced legislation to let other financial regulators overturn CFPB rules, to eliminate a fund the bureau uses to compensate consumers who’ve been defrauded by an institution that’s gone belly-up, and to restrict the kind of data the bureau may collect from consumers. (Republicans have charged that the CFPB’s collection of credit data is a violation of privacy, even though the bureau does not collect any personal details the consumer doesn’t volunteer.)

The Democratic-controlled Senate has refused to consider these types of bills from the House, but the floodgates would open with a GOP takeover. “You just have to watch the House to see what is going to come out of the Senate,” says a Senate Democratic staffer who works on banking issues.

Sen. Richard Shelby (R-Ala.), who is expected to chair the banking committee if his party takes the Senate, has led the charge to water down the CFPB’s powers. Financial-reform advocates say he would likely speed the House bills through committee.

President Obama, of course, has his veto power—Senate Dems could block legislation so long as Republicans lack a filibuster-proof majority. But Obama and his party might cave, Hill staffers say, if anti-CFPB legislation were attached to a bill they really had to pass, such as an appropriations bill or a debt ceiling measure.

A Republican-controlled Senate would also likely try to eviscerate portions of the 2010 Dodd-Frank financial reform act. In 2011, Shelby introduced a bill to beef up the requirements that force banking regulators to conduct cost-benefit analyses prior to issuing any new rule—a significant hurdle. Last year, the House passed a handful of bills to deregulate derivatives, often-opaque banking products that have been demonized as “financial weapons of mass destruction.” In June, House Republicans passed a bill chipping away at consumer mortgage protections.

The financial industry and Republicans are likely to sell these Dodd-Frank rollbacks as “small technical” fixes, a former Treasury Department official told me, and “the White House is more likely to cave” and sign them into law if “they don’t have help from a Democratic Senate in blocking and tackling.”

A GOP Senate would scale back financial regulations “in so many ways,” the Democratic Senate staffer says, “I don’t know where to start.”